Why Protests Are Erupting All Over Poland 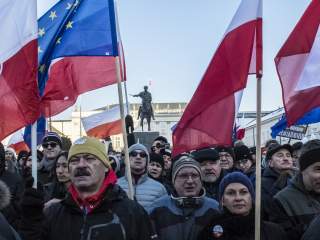 On Friday, the Polish government voted to severely restrict the ability of independent journalists to cover proceedings in parliament. The new law would give preferential access to journalists who work for state-owned media, which is operated by loyal party apparatchiks. Though the government is beginning to back away from this draconian law after protests erupted all over the country, it serves as another reminder of the fragility of Polish democracy.

This is neither the first nor worst assault against democracy since the Law and Justice party (PiS) took charge in November 2015, but it may be the most brazen. Led by Jarosław Kaczyński – a populist who simultaneously touts right-wing nationalism and left-wing economic policy – the party has rolled back democracy at every possible opportunity. Despite detesting its Soviet past (as well as the current occupant of the Kremlin), the party wholeheartedly embraces the strong-arm political tactics of that era.

Soon after winning the election, PiS attempted to pack the country’s high court with party loyalists, and it gummed up the court with laws intended to prevent it from issuing rulings unfavorable to the government. In January, the party wrested control of the state media from a supervisory committee, which culminated in this weekend’s restriction on journalists.

Michał Szczerba – a member of the opposition party, Civic Platform (PO) – objected on the floor of parliament. Not in any mood to listen, the ruling party interrupted his speech, then illegally prevented him from voting. That prompted the entire opposition party to shut down proceedings in the parliament. In a legally questionable move, the ruling party relocated to another room and voted on the budget. As this parliamentary crisis was unfolding, Polish citizens protested in the streets, demanding a free media.

Worst Crisis Since the Fall of Communism

In 1989, Poland finally shook off the shackles of communism. The decade prior, however, was a period of unrest. The country was governed by martial law from 1981 to 1983. Political observers are comparing the current tumult to that which occurred during the darkest days of the early 1980s.

Radek Sikorski, the former minister of foreign affairs and frequent commentator on American television, joined the protest in Warsaw. He denounced the dishonesty of Mr. Kaczyński and, indeed, Kaczyński is a deeply dishonest, if not slightly disturbed, man. His twin brother Lech, who was president of Poland at the time, was tragically killed in an airplane crash in 2010. To rebuild his waning political career, Mr. Kaczyński spread conspiracy theories about Russian involvement in the accident. He also wrote a book in which he warned that Germany may try to annex parts of Poland and that German Chancellor Angela Merkel was elected with the help of the East German secret police.

In other words, though Poland is nominally governed by President Andrzej Duda and Prime Minister Beata Szydło, the real person in charge, Jarosław Kaczyński, is a paranoid conspiracy theorist who has little use for Western democracy.

Yet Another Danger for Europe

As is the case with most populists, Mr. Kaczyński is not a fan of the European Union, even though Poland has received tremendous economic benefits since joining the club. He has cozied up to Hungarian Prime Minister Viktor Orbán who, like his Polish colleague, believes journalists and judges are nuisances to be quashed rather than crucial guardians of democracy.

But with so many potential existential threats facing the European Union – from Brexit and Marine Le Pen to the ongoing euro crisis in Greece and the possible collapse of banks in Italy – Poland’s slide toward “illiberal democracy” may fly under the radar. The EU will likely have little political appetite, let alone the ability to work around Hungary’s veto, to sanction the country.

At least until the next election, Poland – one of the brightest stars of post-communist Europe – will be governed like a banana republic.