Why Putin Is Upping the Ante on Ukraine 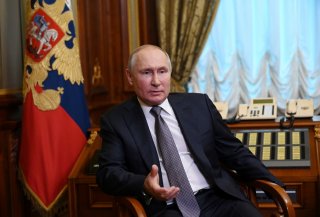 This past April, Russian president Vladimir Putin massed over one hundred thousand troops near the border with Ukraine, escalating tensions between the two countries and prompting widespread speculation about his intentions before he ultimately withdrew some of his forces.  Then, in June, Russia, after an apparent confrontation with a British destroyer sailing into the twelve-nautical mile territorial zone around Crimea, threatened to bomb such vessels in the future. Now, in an expansive essay that was published on a Russian government website on Monday, and with a State Duma election looming in September, Putin has elaborated upon his views of the relationship between Ukraine and Russia. Consistent with Putin’s previous essays, it delves deeply into the anfractuosities of Russian history, delivering what can only be described as an uncompromising description of Russian and Ukrainian ties. Put bluntly, an emboldened Putin appears to be inaugurating a new phase in the East-West competition.

In his essay, Putin dismisses the notion that Ukraine and Russia have separate destinies. Nothing, he suggests, could be further from the truth. “I am convinced that the true sovereignty of Ukraine is possible only in partnership with Russia,” Putin writes. “Our spiritual, human and civilizational ties have formed for centuries and have been rooted in the same sources, they have been hardened by common trials, achievements and victories.” Putin even delves into the etymology of the word “Ukrainian,” contending on the basis of his linguistic researches that it “originally meant border service people who ensured the protection of external borders." In follow-up remarks, Putin intimated on national television that recent western moves had prompted him to publish the essay. “It looks like active work on the project "anti-Russia,” he said, “has begun, and this, of course, elicits certain concerns.”

Is Putin seriously considering annexing the Donbas region or a fresh incursion into Ukraine? Or is he simply engaging in a round of muscle-flexing before the September elections? Past is prologue. Stepping up the ante on Ukraine would be consistent with Putin’s approach to foreign policy, where he has scored his greatest successes. Even as the Russian economy falters, Putin has ensured that Moscow is punching above its weight abroad. It has signaled its return to great power status by quashing Georgia in August 2008. It has annexed Crimea in March 2014. It has returned to the Middle East, augmenting its influence in Syria and Iran.  The war in Ukraine, by contrast, has been something of a mixed bag. Its inconclusive nature means that Putin can step up the pressure on Ukraine, whenever he pleases. But it also means that it has become something of a morass, one has not clearly and decisively ended on Russian terms.

It is also the case that Ukrainians tend not to dismiss Putin’s statements. No doubt Ukrainian president Volodymyr Zelensky has sought to downplay them by suggesting, “It was nice that a person knows Ukrainian.”

But Arseniy Yatsenyuk, the former Prime Minister of Ukraine and the founder of the Open Ukraine Foundation, appears to have a starker view. Yatsenyuk, who is currently visiting Washington, where he spoke at the Atlantic Council, told me that, if anything, Putin has grown “stronger in the past five years.” Biden, he said, had passed Putin’s test by not flinching during the recent troop buildup. But Yatsenyuk, an advocate of Ukrainian membership in NATO, indicated that he believes Putin retains several options, both soft and hard, to try and restore Ukraine, as far as possible, to the Russian orbit. “Putin’s mission,” he said, “is to restore the greatness of the Russian empire.”

Until now, Putin has not been a gambler but a shrewd tactician, pocketing his easy gains abroad, whenever and wherever he can, no matter how much the West may ineffectually protest. But Putin’s own stance now appears to be hardening. His interest in compromise with the West, never all that great in recent years, now appears about as low as the water level at the Hoover Dam. Putin may be at a crossroads. If he acts upon the precepts he enunciates in his essay, it could transform the East-West confrontation into something much nastier and more foreboding.