Why Race And Ethnicity Have Infected the Debate About Vaccine Distribution 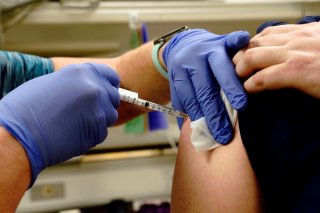 In the past few days, a variety of young and healthy legislators on Capitol Hill who more often than not profess to seek to protect the weakest members of American society are suddenly lining up to receive the new and scarce Covid-19 vaccine. But there is one Democratic lawmaker who is standing up for the truly vulnerable: Rep. Tulsi Gabbard. Gabbard said that it was hypocritical for lawmakers like Alexandria Ocasio-Cortez to jump ahead in line to receive the vaccine. She went on to decry the Centers for Disease Control and Prevention, noting “For months the CDC has been telling us that the elderly are the most vulnerable. But now they are recommending that 100 million so-called essential workers, which means healthy people working in everything from liquor stores to telephone companies can get the vaccine before our grandparents can.”

She has a point. America is once more mired in a controversy about a politically correct vaccine distribution policy. As Ross Douthat noted this past Sunday in the New York Times, the interim recommendation of the CDC’s Advisory Committee on Immunization Practices may have had a veneer of scientific expertise, but it had its own agenda. Questions, Douthat wrote, about “who deserves a vaccine are all jumbled up, then used to justify the conclusion that we should vaccinate essential workers before seniors … because seniors are more likely to be privileged and white.” White privilege and the vaccine? The chair of the CDC committee happens to be Dr. Jose R. Romero, who was director for Latino Health-Related Research Affairs at the University of Nebraska and director of the Minority Health Education and Research office.

This identity politics imbroglio, it should be noted, has occurred on the watch of President Donald Trump, not President-elect Joe Biden. Even in a week filled with congressional negotiations over a new stimulus package, warnings of smaller Covid-19 vaccine shipments for states, and debates over vaccine distribution priority rankings, Trump has remained silent on nearly all pandemic-related issues but has stayed laser-focused on overturning the election results. The result is that his administration is backing policies that subordinate the elderly and those with medical conditions to the whims of a politically correct vaccine policy that imperils their lives.

While the president has been fixated on challenging the outcome of the election, the coronavirus has triggered a menacing rampage across the United States, as more than 318,000 Americans have died from the deadly disease. To combat the infection’s spread, the United States kicked off the first vaccine shipments last week, where the Pfizer vaccine arrived at hospital systems across the country. But due to the limited supply of the vaccine, debates over who stands next in line to get inoculated have sprouted in recent weeks, especially with coronavirus hospitalizations and cases surging to uncontrollable numbers, overwhelming health care workers and dwindling the quality of patient care.

As Jordan Kisner notes in the Atlantic, “doctors have had to make wrenching life-and-death decisions on the fly. The result has been chaos and unnecessary suffering, among both patients and clinicians. As the country prepares to distribute vaccines, we’re at risk of reprising this chaos.” It is the elderly, again and again, who are viewed as dispensable. A kind of Social Darwinism has taken hold in Trump’s America where he and it have become numb and indifferent to the horrific death toll of the pandemic.

A federal advisory committee to the Centers for Disease Control and Prevention (CDC) recommended guidance on effective distribution in early December for the first part of Phase 1, or Phase 1a, suggesting that health care workers and residents of long-term care facilities be first in line to get one. Recommendations are nonbinding, so state and local governments can loosely follow the guidelines and mend them to meet the needs of their residents.

The committee finished up a vote on Sunday for Phase 1b and 1c, determining that people who are ages seventy-five and older, along with roughly 30 million frontline essential workers should be next in line to get a vaccine in the United States. Federal officials are hopeful that about a third of the country’s population will receive one by the end of February 2021.

For Phase 1b, which is expected to begin next month, the group’s framework recommends that people ages seventy-five and older—citing the higher death rate among older Americans—as well as frontline essential workers who are the most exposed to the infection like teachers, police officers, firefighters, and grocery store workers should be prioritized.

And the third priority group to be next in line for the vaccine, or Phase 1c, is people ages sixty-five to seventy-four; people with high-risk medical conditions from ages sixteen to sixty-four; and all other essential workers like those with jobs in restaurants, construction, law, and transportation.

The 13-to-1 vote established the order of high-risk priority groups for the first months of coronavirus vaccine distribution, a contentious decision that’s received pushback from Americans, as some have questioned why healthy and young essential workers would receive vaccines before someone between the ages of sixty-five to seventy-four or someone who’s would be at risk of serious illness from Covid-19.

But members of the committee supported the suggestions, noting that these essential workers, who tend to be low-wage people of color, were being hit harder by the impacts of the pandemic due to lack of medical resources and health care.

Much of the public disputed the committee’s plea, emphasizing that the elderly and those with underlying medical conditions are also at high-risk and should be prioritized.

“Our attempt has been always to achieve equitable ethical and fair distribution of that resource. We have never targeted a specific ethnic nor racial group for receipt of the vaccine,” Dr. Jose R. Romero said in a statement before the vote on Sunday, rejecting the racial accusation. So far, there are ample grounds to regard that statement with more than a little skepticism.