Why Radical Democrats Are Handing the Election to Donald Trump 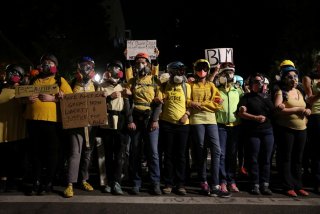 A few days ago, as I walked past the boarded-up storefronts of looted shops, pharmacies and liquor stores in an ordinarily peaceful neighborhood of my Washington, DC, home town, I found myself remembering a quote from Dr. John Arbuthnot (1667-1735), a canny Scots physician, scientist, mathematician and polymath. Largely forgotten today, Arbuthnot was one of the leading thinkers of his time. Like most profound thinkers, his ideas have stood the test of time. The quote I recalled, which gives new meaning to the term “gag rule,” certainly applies to the troubled times we are now passing through: “All political parties die at last of swallowing their own poison.”

Although the line was written centuries before even Joe Biden was born, the words ring especially true today. While both of our major political parties have had more than their share of delusional, self-destructive moments in recent months—the current presidential race is not so much a contest between towering titans as between dueling dorks—as of now, the Democrats have swallowed more of their own poison than the Republicans. After so many years of successfully exploiting fear and deception, class resentment and racial tension, much of the Democratic leadership has ideologically overdosed.

In their heavily-drugged state, they have mistaken “The Mob” for “The People.” It’s a mistake that may cost them dearly come November.

With every case of arson, every attack on government buildings, every act of vandalism, and every fresh outburst of looting and shooting, the divide between “The Mob” and “The People” is widening. And the Democratic Party today stands on the wrong side of the divide.

Despite the shameless efforts of the mainstream media to soft-pedal the urban inferno playing out before our eyes as “mainly peaceful protest” the truth is beginning to sink in as much media coverage has degenerated to the level of self-parody. Emblematic of this was an Orwellian report on fresh rioting with a CNN reporter speaking in front a city street illuminated by roaring flames from gutted cars while the caption “Fiery but mostly peaceful protests after police shooting” ran across the bottom of the screen. Big Brother would have been proud.

The same night this was happening, Vice President Mike Pence declared in his acceptance speech that, this November, “Law and order are on the ballot.” Since then—as if to prove his point—we’ve seen more killing, burning, theft and mayhem. In a new twist on political correctness, we’ve also witnessed shouting, screaming mobs try to bully innocent restaurant diners into making the clenched fist salute which was being used by communists long before the radical leadership of Black Lives Matter culturally appropriated it. We’ve also seen street mobs physically menacing public figures like Kentucky Senator Rand Paul as he was peacefully walking away from the White House the night of Donald Trump’s acceptance speech.

On a more bipartisan note, another crowd of “mainly peaceful” radical demonstrators erected a guillotine outside the residence of Washington Post owner and Amazon founder Jeff Bezos. As the old saying goes, the revolution has a way of devouring its children. Not to mention its parents. Who knows, before it’s all over we may even see George Soros, the billionaire who has bankrolled so many leftist front groups, being led away in a tumbrel for political re-education at one of his own radical think tanks.

Some of the saner members of the respectable Left are beginning to wake up to the danger. Liberal journalist George Packer, whose political writing in The New Yorker is always less knee jerk and more intelligent than most of his peers, sounded the alarm in a recent piece in The Atlantic.

“Here’s a prediction about the November election,” he wrote the week of the Republican convention. “If Donald Trump wins, in a trustworthy vote, what’s happening this week in Kenosha, Wisconsin, will be one reason. Maybe the reason.”

Citing Vice President Pence’s remark about law and order being on the ballot, he added: “It’s no use dismissing their words as partisan talking points. They are effective ones, backed up by certain facts.”

And facts, as John Adams so long ago reminded us, are stubborn things.