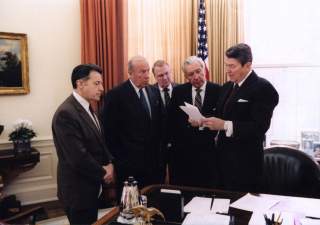 As the Obama era draws to a close, how will history judge the administration’s Middle East policy? The bloodletting in Syria, the growing sectarian tensions in the region and the continued stalemate in the Israeli-Palestinian conflict suggest that the verdict will not be too kind. Yet history also warns us of the dangers of drawing rash conclusions.

After all, twenty-eight years have passed since Ronald Reagan departed the White House. He is still hailed by many Americans as the leader who ended the Cold War, yet remarkably few have drawn attention to his dismal record in the Middle East. Poignantly, the recent passing of Israel’s elder statesman, Shimon Peres, presents an opportunity to revisit an episode which casts the Reagan administration in a new light. Not necessarily in a favorable light. Almost thirty years on, the Reagan administration’s failure to support Peres in his peace efforts with Jordan’s King Hussein increasingly looks like a costly blunder. The reverberations of this policy failure are arguably still with us today.

Reagan’s timidity and vacillation was embodied by his own initiative of September 1982 which he unveiled in a belated bid to bring peace to the region in the wake of Israel’s invasion of Lebanon. A self-governing Palestinian authority was to be established through free elections in association with Jordan on the West Bank. The initiative also called for an immediate settlement freeze by Israel in the Palestinian territories. As a popular president at this time, he could and should have persevered with his peace plan. Instead, he quickly backed down in the face of the fierce opposition of Israel’s Begin government. This set the tone for what was to come.

Following Israel’s elections in July 1984, Labor’s Peres entered a national unity coalition with his political rival Yitzhak Shamir of the Likud. Peres was seen by many world leaders as the great hope for achieving a peace settlement while Shamir was adamantly opposed to the concession of territory on the West Bank as part of any peace deal. Peres had started out as a hawk and had supported the establishment of settlements in the occupied territories during the 1970s. However, by the time he had become prime minister in September 1984, he sought to restore the heavily populated areas of the West Bank, which Israel had captured in the 1967 war to Jordanian rule in order to further the chances of peace. This became known as the “Jordanian option.”

In April 1987, Peres (now foreign minister in Israel’s coalition government) met secretly with King Hussein in London where an agreement was reached on an international conference to launch a process of negotiations between Israel and the Palestinians, with a view to eventually placing the West Bank under Jordanian rule. Peres had met secretly with Hussein before, but this meeting was different in its ambitions to break the regional stalemate. Unfortunately for Peres, his coalition rival Shamir (now prime minister) was fiercely opposed to the London agreement and sent his defense minister Moshe Arens to Washington to persuade U.S. Secretary of State George Shultz to ignore it. Arens and Shamir succeeded because the Americans were too scared to intervene in the rough and tumble of Israeli politics and support Peres the dove.

Unlike Reagan and Shultz, Britain’s prime minister Margaret Thatcher had no qualms about the risk of becoming embroiled in domestic Israeli politics in an attempt to strengthen Peres at the expense of Shamir. In May 1986, she became the first British premier to visit Israel while in office, when he was still prime minister.

In September 1987, Thatcher urged Reagan to support the Peres-Hussein Accord, since it offered “the best bulwark against the expansion of Soviet influence in the region, as well as the most effective way of reassuring the moderate Arab countries” at a time of growing tension in the Gulf region. However, Reagan and Shultz were unwilling to confront Shamir and get their hands dirty in internal Israeli politics. The distinguished Israeli elder statesman, Abba Eban put it best when he remarked in a private conversation with a British official that Shultz “had badly let down Peres and had done nothing to advance the peace process.” Peres was unpopular and distrusted in Israel but a strong show of support from the Americans could have made all the difference to his standing. Instead, he lost out in the November 1988 elections to Shamir.

King Hussein was also left dangerously exposed as the London agreement collapsed. Instead, the Intifada erupted in December 1987 and the King eventually decided to disengage from the West Bank in August 1988 as the PLO strengthened its influence in the Palestinian territories. It was not long before the extremists of Hamas and Islamic Jihad exploited the growing political vacuum in the West Bank and Gaza. Nothing would ever be the same again in the Arab-Israeli conflict.

Shultz may have had his own reasons for refusing to help Peres: Israel had conspired with officials in the CIA and the National Security Council to secretly sell arms to Iran in the spring of 1985 when Peres was prime minister. Robert McFarlane, Reagan’s national security adviser, and Oliver North of the NSC quietly delivered the arms, and used the proceeds to fund the Nicaraguan Contras. Peres claimed in his memoirs that Shultz was furious with him over the affair, and believed that he had concealed the deal from him. It would also be unfair not to mention that Peres lacked the nerve to bring down the national unity government over his agreement with King Hussein. Had he done so, he might have won over the Israeli electorate and history might have taken a different turn. Shultz did eventually come up with his own peace initiative in 1988 but it was a case of too little too late.

In a private conversation with King Hussein days before Reagan left the White House, Thatcher remarked that the U.S. president had never shown “the slightest interest” in the region and added that the future U.S. Secretary of State, James Baker, would not have the “same hang-ups” about the Middle East as Shultz. On that score, she was correct. President George H. W Bush and Secretary Baker, flushed by the success of the recent Gulf War, dragged a recalcitrant Shamir to the Madrid Conference which took place exactly twenty-five years ago in October 1991. The Likud leader had been dead against participating in an international conference during the previous six years, but caved in to the American pressure. For the first time in history, all the parties to the Arab-Israel conflict were gathered together for direct negotiations. It was this conference which arguably helped to create the conditions which led to the Oslo process two years later. As a result, Peres and Hussein finally reached a peace agreement in October 1994, but a resolution of the Israeli-Palestinian conflict remains unresolved. Tragically, we will never know what might have transpired had the Reagan administration shown the same steely determination and vision as the Bush administration which took its place.

Those Republican politicians assailing the Obama administration for timidity and cowardice in the Middle East might wish to take note.

Dr. Azriel Bermant is a lecturer in International Relations at Tel Aviv University. His book, Margaret Thatcher and the Middle East, will be published by Cambridge University Press in October. Twitter: @azrielb