Why Rittenhouse Is a Hero For Conservatives 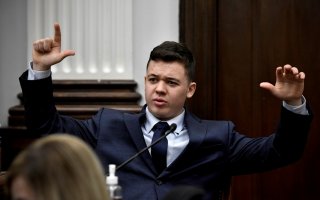 For President Joe Biden, discretion has become the better part of valor. During the presidential campaign, he depicted Kyle Rittenhouse as a white supremacist. Now, when questioned about a jury finding Rittenhouse not guilty on all five counts, Biden punted. “Look, I stand by what the jury concluded,” he said. “The jury system works and we have to abide by it.”

Does it? For those who were convinced that Rittenhouse was guilty, the trial result is an outrage, a signal manifestation of white privilege exercising its privileges in the most flagrant fashion possible. “This is a horrible decision and a miscarriage of justice. It sends a horrible message to those who are exercising their First Amendment rights,” said Rep. Bobby Rush. “It is clear that the decks were stacked against the truth in this case. But I remain fully persuaded that truth will ultimately prevail.” For others, it was a vindication of the second amendment. “May Kyle and his family now live in peace," wrote Rep. Marjorie Taylor Greene on Twitter. "Kyle is one of [the] good ones." Polls indicate that a majority of Democrats believe Rittenhouse was guilty, while Republicans do not.

So far, no protest over the conclusion of the homicide trial has taken place in Kenosha, Wisconsin. Governor Tony Evers activated 500 members of the National Guards in the event that local authorities requested them. “Kenoshans are strong, resilient, and have worked hard to heal and rebuild together over the past year," he tweeted Tuesday. "Any efforts to sow division and hinder that healing are unwelcome in Kenosha and Wisconsin."

That the jury verdict found Rittenhouse innocent of all charges against him should not come as a surprise. The surprising thing would have been had it voted to convict. It was the government’s burden to prove he didn’t have a reasonable apprehension of harm beyond a reasonable doubt when he entered Kenosha in August 2020 as a seventeen-year-old wielding an AR-15 semiautomatic rifle in the midst of Black Lives Matter protests about the police shooting of Jacob Blake. This was a tall order, and the prosecution clearly failed to persuade the jury that Rittenhouse had acted other than in his own self-defense when he killed Joseph Rosenbaum and Anthony Huber, and injured Gaige Grosskreutz.

It was Grosskreutz, who, in essence, blew the case out of the water by testifying that he had indeed pointed a gun at Rittenhouse. As Jeremy Stahl noted in Slate, “The testimony went so poorly for the prosecution that following it, the prosecution proceeded to ask Rittenhouse a series of questions that so blatantly disobeyed earlier rulings by the judge that the defense argued it must be trying to induce a mistrial.”

The import of the Rittenhouse trial is that it could further open the door for the Supreme Court to vouchsafe the right to open carry across the United States.

Rittenhouse himself may file defamation suits. His former attorney John Pierce stated, “He has been defamed by pretty much every mainstream media outlet, and untold numbers of celebrities and politicians and the current President of the United States. I would anticipate you’ll see a lot of defamation lawsuit from soon.”

Rittenhouse will likely remain a cause célèbre for the right heading into the 2020 midterm elections. Rep. Matt Gaetz has already floated the idea that Rittenhouse could work as an intern for him. “We may reach out to him,” said Gaetz, “and see if he’d be interested in helping the country in additional ways.” Writing Politico, Meredith McGraw observes that the case of Nick Sandmann, who was falsely accused of behaving belligerently toward a Native American drummer at the Lincoln Memorial, may be instructive. Sandmann sued for defamation and spoke at the 2020 Republican National Convention about the perils of cancel culture. In fact, Sandmann has already suggested that Rittenhouse should sue in an op-ed in the Daily Mail. Now it is Rittenhouse who can be upheld as a victim of a dominant liberal woke culture that has not awoken to the surging forces represented by Rittenhouse’s admirers that are opposed to it.