Why Russia and China are Cooperating More Than Ever 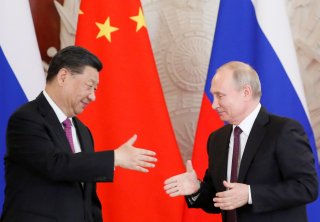 As I predicted on Russian television on Channel One’s key political program "The Big Game," for Moscow the recent summit between Joe Biden and Vladimir Putin is not only “seminal”, but also meaningful. Although one can hardly call the return of ambassadors to Washington and Moscow and the willingness to discuss the issues of strategic stability a great success, the very fact that these leaders were facing each other and outlining the red lines for the opposite side can already be justifiably construed as a success.

In general, the red lines have come down to the following. On the Russian side: inadmissibility of Ukraine’s membership in NATO; non-deployment of short- and medium-range missiles in Europe, especially in the former Soviet republics; the West's rejection of attempts to overthrow Lukashenko's regime in Belarus; inadmissibility on the part of the U.S. and Europe of attempts to organize a “color revolution” in Russia; and refraining from financial and political support of the Russian antisystem opposition. On the U.S. side: Russia's non-interference in the U.S. elections; Russia's non-use of cyberattacks on important U.S. infrastructure facilities; Ukraine's territorial integrity; and protection of human rights in Russia and Belarus.

The personal meeting of the presidents contributed to the success in their interpersonal relations. It somewhat ironed out the tension that arose between Putin and Biden after Biden’s affirmative answer to George Stephanopoulos’s question of whether Putin was a “killer” on ABC.

This is evidenced by two events. Right after the meeting in Geneva, Biden reacted abruptly toward a CNN reporter, who, with her question, tried to provoke him to speak negatively against Putin. The answer was not long in coming.  Returning from Geneva, Putin at the first opportunity spoke very highly about Biden, not only appreciating his professional qualities as an experienced expert in international relations and a negotiator, but also his good physique.

Nevertheless, it is unlikely that the meeting will have a serious impact on the nature of U.S.-Russia relations. Russia's red lines are clearly outlined, but it seems unlikely that the United States. will adhere to these red lines. The United States has defined its red lines very abstractly, which also does not suggest that Russia will hold to them, either. Russia has consistently said it has never interfered in the U.S. elections or attempted cyberattacks against U.S. targets. As for human rights, Moscow believes that it is an internal matter, and Americans would do better to protect human rights in their own country, where they have quite a lot of unresolved issues, to put it mildly.

After Geneva, Putin has recurrently made it clear that the red lines drawn for Russia are existential—no pressure from the United States and the European Union, no sanctions will force Russia to abandon them without concessions from both sides.

Although the “China issue” was not discussed separately at this meeting, the topic of China and the relations in the Russia-China-U.S. triangle was present sotto voce in Geneva. Both before and after the summit, there were many statements from American and Russian politicians that the U.S., as well as the West as a whole, is very concerned about Russia's rapprochement with China and that the Americans need to do something to ensure that Russia does not end up in China’s “embrace.”

The idea of China being the main enemy of the United States originally belonged to Trump. Trump wanted to improve relations with Russia to help check China’s rise. Biden's agenda obviously contains many provisions of Trump's previous policy. Trump has left, but Biden inherited "Trumpism" as a legacy. Indeed, Biden has lifted serious sanctions against the Nord Stream 2 gas pipeline. It would appear that the U.S. and Europe have started to realize that with their misguided and counterproductive sanctions and pressure on Russia, they have stymied Moscow and left it no choice other than to move closer to China.

In short, Washington and Brussels are acknowledging that it is necessary to try to detach Russia from China. It is a very difficult task but I think that Western countries will try to give Russia a variety of proposals to convince it that in the long term a very close alliance with China is not beneficial to it. Though the demonization of Russia and Putin in the West has reached such a level that it will be very difficult for them to change the already established course, most likely they will still try to change it. It will also be difficult for Russia, because there are too many red lines between Russia and the West, which, to date, the West had not been willing to accept and respect.

It would be a good idea need to elevate Russian Chinese economic relations to a qualitatively different level so that they correspond to the level of military-political relations between Russia and China. This will require the implementation, with the active involvement of the Chinese investors, of several major projects in Russia in areas where a lot is already being done—energy, infrastructure, banking, high technology, aviation—but not big enough in terms of scale. Russia has carried out at its own expense several important projects related to the construction of a gas pipeline and infrastructure for the supply of other energy carriers. In Russia, practically, there is not a single major project initiated by China, and there is no serious investment.

Today, China invests a lot in Africa, Latin America, and several Southeast Asian countries. This is very useful and important for China. But strategically and economically, investments into the economy, infrastructure, and scientific and technological sectors in Russia could be invaluable for both Russia and China. They would thus leave no argument to both the anti-Chinese experts in Russia and Western politicians and strategists who want to decouple Russia from China.

Both the Russian establishment and Putin personally understand that a growing China, this giant on Russia's borders, is not only a challenge but also a real opportunity. Today, China in many areas of high technology has not only caught up with Europe and the United States, but also sets itself the task of leaving Western countries far behind (in 5G technology, artificial intelligence, biotechnology, and so on).

​China's expansion into Central Asia through “One Belt, One Road" projects also represents a challenge and an opportunity for Russia. Central Asia is no longer an area of exclusive Russian control.  The countries of this region are flirting with the United States, the West, and China. The withdrawal of the U.S. military contingent from Afghanistan, the possible growth of the Taliban's influence in Afghanistan, and Turkey’s geopolitical ambitions are all altering the region. An extension of an Islamic NATO member state to China's borders, given the presence of an estimated 30 million Muslim population in China itself right on its borders with Central Asian states, would likely prompt Beijing to assume a more important role in the region’s military-political sphere. Russia will not be alone in ensuring stability in the region, given that the U.S. will try to maintain its presence and influence either directly or by supporting Turkey. For a start, Russia and China might consider strengthening the military component of the Shanghai Cooperation Organization.

​Lastly, by forming an alliance of democracies against authoritarian states, with China and Russia in mind, Washington and Brussels should be aware that they might well leave Russia no other option than to cooperate more closely with China. If, as many analysts suggest, a cold war between China and the United States has already begun, it might last much longer than the original one between Washington and Moscow. In the looming global confrontation that may last for many decades (given the close parity of military and economic power of the United States and China), it will be surprising indeed if suddenly the leadership of China decides to turn such a valuable and important partner and ally as Russia into an enemy.