Why Russia and China's Navies Are Drilling Together More Than Ever 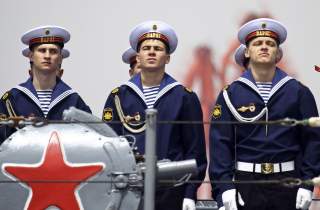 During the “Golden Era” of Sino-Soviet relations, in the 1950s, naval matters formed some of the most pressing issues on the agenda of that erstwhile alliance. Mao Zedong was counting on the Kremlin to provide Beijing with the fleet (or at least the relevant know-how) that would finally enable the conquest of Taiwan. China’s navy received some impressive platforms, such as a cutting-edge ballistic-missile submarine, for good measure, illustrating the coziness of this relationship. Yet Soviet leaders also expected strategic benefits from the bargain, including renewed access to the old Russian base at Port Arthur (旅顺港), the building of transmitters for naval communications with submarines operating across the vast expanses of the Pacific and even the prospect of commanding Chinese ships within a “joint fleet” construct. Of course, these ambitious plans all came to a crashing halt in the early 1960s, broken on the rocks of outsized leadership personalities and nationalist dogma.

Are we back in the 1950s today? Hardly—but the growing closeness of Beijing and Moscow seems to be a generally stable feature of contemporary global politics. Back in July, the PLA Navy made a dramatic visit to the Baltic Sea, deploying one of its newest and most capable surface combatants, the Type 052D, for its first-ever joint military exercise in those sensitive waters. A Chinese military newspaper quotes an American analyst, who suggested that drill “caused regional states to feel uneasy [引起演地区国家的紧张].” That September 22 article from China National Defense (中国国防报) also offers a rather detailed examination of the second segment of the Russian-Chinese naval exercise, which occurred in the Pacific in September 2017. Western media covered that second exercise rather competently, but some additional detail and context may help in forming a more complete assessment.

As the eighth iteration of the joint naval exercise, a process initiated in 2012, the process by now appears to be well rehearsed. Russia and China have carried out the exercise twice a year since 2015, suggesting that both countries see value in it. The most recent drill off Vladivostok appeared rather low key, featuring a smallish Chinese contingent—just four PLA Navy ships—and none of the large amphibious ships with marine components that had joined previous exercises. However, the China National Defense analysis suggests otherwise: “Although the Chinese side did not send a large number of ships, the capability of the ships was relatively advanced [中方参演舰艇数量虽然不多，但性能普遍比较为先进].” True, the destroyer that the PLA Navy dispatched, Shijiazhuang, is somewhat old (ten years) by Chinese standards, but the oiler is new, completed in 2015, and the submarine rescue ship also only joined the fleet a few years ago, in 2013. A Type 054 frigate rounded out the Chinese squadron. With eight ships and boats participating in the home exercise, Russia’s contribution was naturally larger. Notable among the Russian participants were both large and small antisubmarine warfare (ASW) ships, as well as two large IL-38 ASW aircraft.

The centerpiece of this exercise appears to have been the submarine-rescue drill. As it turns out, the Chinese Navy possesses one of the most advanced submarine-rescue submersibles in the world. LR7 was built in the United Kingdom, and the Chinese Navy has operated the imported system with increasing confidence in international settings, including at RIMPAC in mid-2016. It is worth recalling that international cooperation helped rescue a Russian minisubmarine in the Pacific in 2005, underlining the importance of such exercises. On September 20, this exercise proceeded with a drill on a target-stricken submarine at a depth of fifty meters. The submarine-rescue simulation involved the use of unmanned underwater vehicles (水下航行器), as well as medical procedures for treating injured sailors. It is certainly true that such drills are quite routine among the U.S. Navy and the navies of allied nations, such as Japan. Still, it is worth noting the undersea emphasis of this particular joint Russia-China naval exercise.

According to the China National Defense article, “An expert observed that this kind of exercise is important as the [Chinese] submarine force increases its operational capabilities for far seas operations [有专家指出，这个演习科目有利于提高潜艇远海行动能力].” Moreover, it is also stated that ASW exercises are among the most important for all navies, so joint focus on that priority area, it is said, speaks to the high level of cooperation that has been achieved. Another analysis that appeared in China Youth Daily (中国青年报), written by an author from the PLA Navy Engineering Academy (海军工程大学), makes several additional points related to undersea warfare. This particular article underlines the significance of the Chinese Navy’s first-ever visit to the Sea of Okhotsk (鄂霍次克海), an area said to be “extremely suitable for submarine operations [非常适合潜艇活动].” That article notes the great importance of the Sea of Okhotsk for Russia’s force of “boomers” or missile-carrying submarines (SSBNs), which are able to quite easily fire missiles capable of “reaching the U.S. homeland [可抵达美国本土].” A similar point made in this second Chinese analysis is that the route of this squadron is the shortest for the PLA Navy to reach the Arctic Ocean, and this author suggests that the Arctic region has “prominent strategic value.”

One need not exaggerate the dangers to the West posed by enhanced Russia-China strategic cooperation. Indeed, this particular exercise was neither of a vast scope, nor did it adopt an overtly menacing posture. As noted above, the centerpiece of the exercise was a search-and-rescue drill. In another Dragon Eye, I have gone so far as to suggest that enhanced strategic cooperation between Moscow and Beijing could actually be critical to stabilizing the North Korea crisis.

Yet it might also be a mistake to ignore or downplay the significance of China-Russia joint military activities. As the China National Defense analysis relates: “It’s not just on the strategic level that cooperation is much closer, but cooperation has also strengthened on the tactical and technological levels as well [不仅在战略层面上合作更加紧密，而且在战术技术层面的合作更加深入扎实].” There is little doubt that Beijing and Moscow could substantially increase the size and scope of these exercises, insofar as the current iterations evince a substantial hint of restraint, and do not seem intended to alter the delicate regional strategic balance—perhaps especially in light of existing tensions on the nearby Korean Peninsula. But that reasonably benign disposition could, of course, change quickly. Indeed, Western strategists should bear in mind that if they are seeking to create a NATO-like structure in the “Indo-Pacific,” there will likely be serious consequences and countermoves, including very substantially intensified Russia-China military cooperation.