Why Russia Struggles to Feed Its Great-Power Addiction 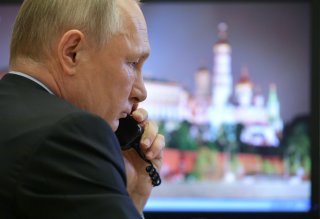 Russia seeks to remain a great power by building an autarkic fortress and deepening ties with China. Although the coronavirus pandemic may reinforce instincts for self-reliance, Russia could lose by resisting globalization or relying too much on China while moving away from the West.

The puzzling thing about Russia is how it is determined to remain a great power but inattentive to some of the means required to sustain a great-power status. For over a decade its economy has been stagnant, yet the Kremlin avoids reforms that could unleash the private sector. Over the past several years Russia's labor force has declined by three-quarters of a million people per year, yet Moscow invests too little in health care, especially in its rural areas. The flight of money to the West continues, yet improved business conditions could diminish it. The country’s military adventures⁠  in Abkhazia, South Ossetia, Transnistria, Syria, and Ukraine are all a net drain on the economy. The recent oil price drop and the coronavirus pandemic may lead to a further weakening.

Despite these woes, Russia is clearly a great power. Its vast landmass links two of the world’s largest economies, China and the European Union. Russia is the second biggest producer of natural gas and produces a third of oil. It is a nuclear weapons superpower and has an educated workforce.

Russia enhances its great-power status when it cooperates. It helped negotiate the 2015 accord to limit Iran’s nuclear program. In 2013, Russia and the United States collaborated to eliminate some of Syria’s chemical weapons. Russia has widened its relationships in the Middle East. It is an efficient supplier of natural gas to Europe. At times, Moscow cooperates with the UN Security Council and as a security force in Darfur, although at other times it does not. For example, it did not cooperate on humanitarian access in Syria. Russia and Europe are of one mind in urging the Trump administration to extend the U.S.-Russian New START Treaty.

In recent years, however, Russia has become less cooperative and pursued more autarky. Its aggression in Ukraine led to Western sanctions that may have cost Russia over six percent of GDP. Election interference in western democracies and support for the Assad regime have spurred even more sanctions. In banning some Western organizations as “undesirable” and cutting in U.S. educational exchanges the Kremlin reduces global awareness among Russians. Sports doping has sidelined many Russian Olympic athletes.

Too much autarky could leave Russia behind. At first glance the drive toward autarky may seem in tune with the times. Beyond the harmful U.S.-China trade war, nations around the world have levied over eighteen thousand trade-restrictive measures since 2009, compared to seven thousand liberalizing measures.

The pandemic may bring more global tightening. Some Western supply chains may move closer to home. The European Commission is calling on member countries to take part ownership of European firms to prevent Chinese takeovers.

Yet powered by efficiency, globalization marches on. Merchandise trade hit an all-time nominal record in 2018, more than one-fifth above that a decade ago, although trade fell by 3 percent in 2019. In 2018 commercial services exports hit a record, nearly a half more than in 2008.

Another hallmark of globalization, foreign direct investment, is also on the upswing. Cumulative FDI worldwide in 2018 was over $32 trillion in 2018, its second-highest level in history and well over twice the 2008 level.

Russia recognizes the value of global exchange. Beyond oil and gas sales, it is the world’s number one wheat exporter and a major exporter of metals, machinery, wood, and fertilizers. But lower oil prices, a likely pandemic-induced recession, and import substitution policies may weaken Russia’s economy. Further bets against globalization could add to these downward pressures.

Russia has built financial resilience by accumulating over a half-trillion dollars in foreign exchange reserves. In the wake of the pandemic and oil price drop, it could build further resilience by reducing excessive dependence on one or a few countries, such as China, or industries, such as oil and gas. Russia has upgraded its ties with China to a “comprehensive strategic partnership for a new era.” Closer China ties bring some benefit. But for Russia, the United States and Europe are richer markets and more innovative and import accepting than China.

The West has an interest in Russian cooperation to tackle global challenges, ranging from nuclear dangers to climate change and public health. This is more likely if Russia globalizes and becomes more prosperous. The West has little influence on the choices Russia makes but a large interest in its future direction.

William Courtney is an adjunct senior fellow at the nonprofit, nonpartisan RAND Corporation, and a former U.S. ambassador to Kazakhstan and Georgia.

Howard J. Shatz is a senior economist at the RAND Corporation.