Why Saudi Arabia is Hammering Yemen 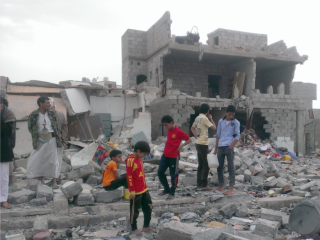 When Saudi Arabia began bombing Yemen last year, many observers speculated that it was sending a message to its neighbors. Now, as the violence drags on, the Saudi campaign is calling to mind another country, one half a continent away.

The war, intended to stop the progress of local Houthi militias, is being waged by Prince Mohammed bin Salman, Saudi Arabia’s powerful and precocious defense minister, and whispers have been circulating for months that Yemen is his Vietnam. It wouldn’t be the first time. During the 1960s, Egyptian president Gamal Abdel Nasser intervened in the North Yemen Civil War to stop a dethroned imam from reclaiming power, and quickly found himself trapped in a quagmire. Afghanistan may be the “Graveyard of Empires,” but Yemen has also bogged down its share of foreign invaders.

Military metaphors aside, the real problem now is that Yemen is starving to death. Already the poorest country in the Middle East, Yemen has for months been subjected to a Saudi blockade, creating shortages of essential goods, including food. This has, not surprisingly, bred hostility—Riyadh is now losing the battle of hearts and minds, as it were. So why would the Saudis do this? Why pulverize a country to stop the Houthis? Given the devastation that’s been wrought, it seems like squashing a fly with a sledgehammer.

Part of the reason is that Yemen sits on Saudi Arabia’s back doorstep, and a hostile government there could put southern Saudi communities in danger. But the campaign in Yemen has actually worsened Saudi security, as Houthi militants retaliate by firing rockets at Saudi villages and staging border raids. And while Al Qaeda has menaced Saudi Arabia in the past, its presence in Yemen has never elicited a major military mobilization—that’s been left to the United States. So why intervene now?

To understand the war in Yemen, you have to assume the perspective of a Saudi elite and zoom the camera outwards. Once upon a time, the Shia-majority nations of the Middle East were ruled by monarchs and strongmen who were largely unsympathetic to the idea of Shia power—Iraq under the Sunni Saddam Hussein, Bahrain under the Saudi-backed Khalifa dynasty, and Iran under the Pahlavis. Islam was governed as it had been for centuries, with Sunnis wielding power and Shia awaiting the end times. America viewed the Middle East through the lens of regnant Sunnis, and collaborated with many of them, most notably the Saudi royal family.

That’s all changed over the past thirty-five years, first with the Islamic Revolution in Iran, which produced an aggressively Islamist Shia government, and then with the American occupation of Iraq, which effectively transferred governance away from the Sunnis. As Iraqi Shia queued up to vote and Iranian pilgrims spilled over the border to visit the holy city of Najaf, the Middle East underwent an awakening that gave real autonomy to Islam’s long-oppressed minority (Shia are only 10–15 percent of the Muslim population). Vali Nasr has expertly chronicled this revolution in his 2007 book The Shia Revival.

That revival triggered a ferocious counterreaction from Sunnis, who streamed into Iraq for a chance to spill the blood of heretical Shia. And while the region’s Sunni states didn’t actively oppose the awakening, they watched the course of events with a good deal of nervousness. In 2004, King Abdullah of Jordan spoke for many when he warned about a “Shia crescent” sprawling across the Middle East, from Bahrain to Iran to Iraq through the Alawite Assad regime in Syria and into Hezbollah-friendly districts of Lebanon. Tehran was on the eastern side of this swath, but it was the political center—Abdullah’s fear was that a Shia crescent would inevitably become an Iranian empire.

So it came as no surprise when the Saudis helped the Sunni monarchy in Bahrain squash a Shia uprising during the Arab Spring, or when many of the Sunni powers leapt behind efforts to depose the Iran-linked Assad regime. Their real aim was blunting Iranian power. This aversion to Iran courses deeply through the remaining Sunni rulers, especially in Saudi Arabia. A New York Times analysis of Saudi Foreign Ministry documents uncovered through Wikileaks found, as the Times put it, “a near obsession with Iran, with diplomats in Africa, Asia and Europe monitoring Iranian activities in minute detail and top government agencies plotting moves to limit the spread of Shiite Islam.” This is why the Saudis often seem reluctant to put their full energies into the war on terrorism. Sunni jihadist groups like Al Qaeda are manageable and often home-brewed nuisances; Iran is an exterior geopolitical threat.

So when the Shiite Houthi rebels captured the Yemeni capital of Sana in late 2014, a shock was sent through the Middle East’s Sunni nervous system. It mattered little that the Houthis were schismatic Zaydi Shia out of step with Iran’s mainstream Twelver Shiism, or that the Iranians warned that Sana shouldn’t be seized, or that the Houthis aren’t an Iranian proxy in the same way that Hezbollah is. The Saudis immediately blamed Iran. They, along with many of the Sunni states, went to war, pulling their militaries away from the campaign against the Islamic State. Once again, fighting Salafist terrorism was dismissed as an American concern.

The problem for Saudi Arabia now is that its attempt to stymie the Shia awakening has backfired. After over a year of bombing, the Houthis still control Sana, and international sentiment has been roused against the war. The Saudi economy is treading water thanks to low oil prices, and while Iran is facing similar challenges, the nuclear deal has given the Iranians a boost in both revenue and credibility. When Saudi Arabia suddenly executed prominent Shia sheikh Nimr al-Nimr earlier this year, it was intended as a show of defiance, a message to Iran and the restive Shia in its own eastern provinces that the old paradigm of Sunni governance still had some stick. Instead, it brought more international condemnation and the torching of the Saudi embassy in Tehran.

The Saudis are also contending with a freshly disputatious President Obama, who last month accused them of free riding off American security guarantees. Prince Turki al-Faisal quickly countered the free rider claim, and was followed by Prince Abdullah al-Saud who wrote an op-ed in the Wall Street Journal that defended the war in Yemen. The Saudis clearly perceive that they have a PR problem, that America is growing skeptical and that the Shia are gaining strength. Yet it’s their pushback against the Shia—their inhumane war in Yemen—that helped arouse the negative PR in the first place.

The question now is whether the Saudis can work through this briar patch of crises. But one thing is certain: the Shia are awake and they aren’t returning to sleep anytime soon. The Middle East as we know it has changed.