Why Saudi Arabia Stands to Lose from Trump's JCPOA Withdrawal 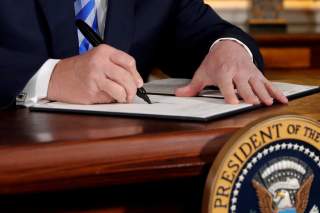 President Donald Trump announced on May 8 that the United States would withdraw from the Iran nuclear deal. Trump’s decision to withdraw from the Joint Comprehensive Plan of Action (JCPOA) was immediately condemned by many U.S. allies—particularly its European allies—but received enthusiastic support from Saudi Arabia. Shortly after Trump’s speech, the Saudi Foreign Ministry expressed solidarity with the U.S. decision and urged the United States to impose stringent sanctions against Iran.

As Saudi Arabia remains embroiled in a struggle with Iran for regional hegemony, its support for Trump’s decision to withdraw from the JCPOA is unsurprising. However, a closer examination of the implications of Trump’s decision suggests that Saudi Arabia’s jubilation will be short-lived. Trump’s withdrawal from the JCPOA could exacerbate latent tensions between Saudi Arabia and its regional allies; and embolden Iran to engage in aggressive policies that undercut Saudi Arabia’s security and weaken its regional influence.

The most immediate concern for Saudi Arabia is that Trump’s withdrawal from the JCPOA will weaken the cohesion of the Gulf Cooperation Council (GCC). Since the outbreak of the Qatar crisis in June 2017, the GCC has been divided into two blocs over the acceptability of engagement with Iran. The GCC’s pro-isolation bloc, which includes Saudi Arabia, the United Arab Emirates (UAE) and Bahrain, believes that Iran is the primary source of instability in the Middle East and that Tehran must be contained at all costs. The GCC’s pro-engagement bloc, which consists of Kuwait and Oman, echoes Saudi Arabia’s concerns about Iranian conduct but believes that selective cooperation and trade with Iran will benefit regional stability.

The chasm in perspectives between these two blocs has been revealed by Saudi Arabia and Kuwait’s divergent public statements about Iran and contrasting reactions to the growing Qatar-Iran partnership. While Saudi Arabia has stridently condemned Iran’s contribution to Iraq’s prolonged state of political instability, Kuwait has been reluctant to make sweeping criticisms of Iranian conduct and has praised Iran’s anti-ISIS efforts in Iraq. Regarding Qatar, Saudi Arabia has viewed Doha’s strengthened partnership with Tehran as a justification for a continued blockade against the besieged emirate. However, Kuwait has insisted that the Qatar-Iran alignment should not preclude Doha’s normalization of relations with the rest of the GCC.

The United States’ withdrawal from the JCPOA could convince Saudi Arabia to pressure Kuwait and Oman to abandon their links with Iran, as Riyadh might view Washington’s shifting policy towards Iran as an opportunity to strengthen its hegemony over the GCC. After all, Kuwait and Oman are long-standing U.S. allies that are actively involved in mediating regional crises, both countries will be confident in their ability to avoid being punished for trading with Iran and to resist Saudi pressure.

If Kuwait and Oman refuse to bow to Saudi pressure, the gap in policies towards Iran between both blocs of the GCC will continue to grow. These divisions could greatly weaken the GCC’s effectiveness as a collective security organization. As the recently signed alternative Saudi Arabia-UAE bilateral security pact has been undercut by the UAE’s occupation of the Yemeni island of Socotra, an inter-bloc schism within the GCC over Iran could leave Riyadh diplomatically isolated in its own sphere of influence.

In addition to undermining the cohesion of the GCC, the increased unpredictability of Iranian conduct associated with a JCPOA withdrawal poses a grave threat to Saudi Arabia’s security and geopolitical aspirations. As Trump’s policies towards Iran have fuelled anti-American sentiments amongst the Iranian public, the political influence of conservative nationalists in Iran who are nostalgic for the Mahmoud Ahmadinejad era of contestation with the West has grown in recent months. The strengthened influence of these hardline factions could convince Iran’s Supreme Leader Ali Khamenei to escalate Iran’s belligerence to prevent Ahmadinejad and other hardliners from instigating mass protests, like those that broke out in late December.

An escalation of Iranian belligerence will undercut Saudi Arabia’s security, because Yemen is likely to be the first area where Iran will flex its military muscles. Just hours after Trump’s withdrawal from the Iran nuclear deal, Iran-backed Houthi rebels in Yemen fired missiles into Riyadh, which were successfully intercepted by the Saudi military. This act of belligerence was widely interpreted as a form of retaliation from Iran for Saudi Arabia’s support for Trump’s withdrawal from the JCPOA.

As hardliners in Iran, like Qods commander Maj. Gen. Qassem Soleimani, support an expansion of Iranian military assistance to the Houthis, a realignment of Iranian politics that emboldens anti-Western nationalists could increase the frequency of Houthi missile attacks against Saudi Arabia. As Iran’s primary objective in Yemen is to raise the costs of Saudi Arabia’s military intervention to a high enough level that Riyadh withdraws from the conflict, Tehran’s strategy in Yemen can be implemented at a relatively low financial cost.

This ensures that Iran will remain a thorn in Saudi Arabia’s side in Yemen, even if the European Union (EU) ultimately accedes to U.S. pressure by suspending many of its pledged investments in the Iranian economy. As the UAE continues to support South Yemeni separatists who seek to overthrow Saudi-aligned president of Yemen Abdrabbuh Mansour Hadi, and Qatar has provided the Houthis with informal assistance in recent months, expanded Iranian involvement on behalf of the Houthis could tip the balance of power in Yemen decidedly against Saudi Arabia.

This scenario would leave Saudi Arabia with the uncomfortable choice between diverting even more financial resources towards a war of attrition that has no certainty of being successful or pushing for a peace settlement in Yemen from a position of weakness. As Saudi Arabia believes that victory in Yemen is essential for its security to be maintained and hegemonic aspirations in the Arabian Peninsula to be fulfilled, Riyadh views a potential escalation of Iranian military involvement in Yemen with great apprehension.

The damage to Saudi Arabia’s security and regional standing will expand further if Iran retaliates against Trump’s withdrawal from the JCPOA by reviving its uranium enrichment program. Although Iran has vowed to uphold its JCPOA commitments and all other signatories continue to participate in the agreement, Iranian president Hassan Rouhani also refused to rule out the revival of Iran’s uranium enrichment efforts.

As Saudi Arabia’s Crown Prince Mohammed bin Salman recently stated that his country would procure a nuclear weapon if Iran restarted its nuclear program. Thus, the collapse of the JCPOA has led to a revival of speculation about Saudi Arabia’s nuclear ambitions. This scrutiny comes at an inopportune time for Saudi Arabia, as Riyadh is currently holding negotiations with the United States to gain Washington’s assistance in developing a civilian nuclear energy program.

As Saudi Arabia has successfully assuaged the concerns of U.S. policymakers regarding Riyadh’s nuclear weapons aspirations by stating that its nuclear energy program is only for peaceful purposes, these negotiations have progressed considerably. A restart of Iran’s uranium enrichment program would raise alarm bells in the United States about a potential arms race in the Middle East, and could make Washington more reluctant to supply Saudi Arabia with nuclear technology.

While Saudi Arabia could still procure support for its civilian nuclear energy program from Russia and China, a withdrawal of U.S. support for Saudi Arabia’s nuclear energy ambitions would be interpreted by other countries in the Middle East as proof that Riyadh is seeking a nuclear deterrent to counter the Iranian nuclear threat. This perception would almost certainly cause Iran to revive its nuclear program, and could inspire a massive arms buildup across the Middle East.

The UAE is also likely to join a Saudi Arabia-Iran nuclear arms race, as it has established the Arab world’s first nuclear energy program. Abu Dhabi’s potential procurement of nuclear weapons is a grave concern for Saudi Arabia, as a nuclear-armed UAE would no longer be dependent on Saudi Arabia for security and could promote its pro-secular foreign-policy vision in ways that undercut Saudi interests.

Although Saudi officials have publicly hailed Trump’s decision to withdraw from the JCPOA, the long-term implications of the U.S. abandonment of the JCPOA are bleak for Saudi Arabia. Trump’s withdrawal from the Iran nuclear deal could trigger the emergence of new fault lines within the GCC, complicate Saudi Arabia’s already narrowing path to victory in Yemen, and provoke a nuclear arms race in the Middle East. The very real prospect of some or all of these outcomes coming to fruition could cause Saudi Arabia to regret its triumphalist reaction to Trump’s JCPOA withdrawal decision in the years to come.

Samuel Ramani is a DPhil candidate in International Relations at St. Antony’s College, University of Oxford. He is also a regular contributor to the Washington Post and The Diplomat. He can be followed on Twitter at samramani2.

Image: U.S. President Donald Trump signs a proclamation declaring his intention to withdraw from the JCPOA Iran nuclear agreement in the Diplomatic Room at the White House in Washington, U.S. May 8, 2018. REUTERS/Jonathan Ernst/File Photo​