Why so Many Refugees from Central America? 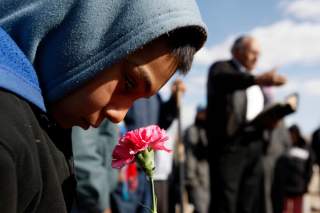 The initial decision by the United States President Donald Trump and his administration to separate families involved in alleged illegal border crossings generated enormous controversy and backfired spectacularly from a public relations standpoint. Mostly lost in all the uproar, though, is needed scrutiny about why there is another spike in the number of refugees from Central America seeking haven in the United States. As with most mass migrations, there is no single cause. Like previous generations of immigrants, some see this country as an ideal land of opportunity and wish to seize it. Also, others are not merely hoping to find better job prospects but are trying to avoid outright destitution in their home countries. Furthermore, other families are fleeing a horrid level of gang violence that has engulfed some Central American societies.

Developments are making the last factor increasingly salient. The level of internal strife in areas of Honduras, Guatemala, and El Salvador has made those countries some of the most chaotic and violent outside of full-fledged war zones. President Trump has even labeled the MS-13 gang, based in El Salvador, a threat to communities throughout the United States. But MS-13 is only one of many street gangs and drug cartels plaguing Central America’s so-called northern triangle.

The extent of the carnage is extraordinary. Four of the countries with the highest annual murder rates in the world are located in Central America. Guatemala ranks ninth, with 31.25 murders per 100,000 people. Belize ranks sixth with 34.4, while Honduras comes in second with a rate of 63.75. But those countries seem almost peaceful compared to El Salvador, which has the highest homicide rate in the world, 108. 64 per 100,000. Moreover, the nation with the fifth highest rate, Venezuela with 57.15 homicides per 100,000, is adjacent to the region.

To put such rates into perspective, consider that the Philippines, afflicted with a simmering local insurgency in the south, ranks fortieth with a rate of 9.84. Even Nigeria—despite the threat that the extremist Boko Haram continues to pose—comes in forty-first, with 9.79. Finally, Zimbabwe with its economic chaos has 6.74 murders per 100,000 and comes in sixty-ninth. The United States claims eighty-first place with 4.88 murders per 100,000 population. The Central American countries are essentially in a league of their own, except for places like Syria and Yemen which are experiencing full-blown civil wars.

Not surprisingly, sensible people might want to get their families out of such lethal environments. According to the United Nations, there were approximately 18,000 refugees from Central America seeking asylum in 2011. That number reached 294,000 in 2017—with 58% being new additions during that calendar year alone. All indications are that the flow has increased further in the first months of 2018, and that trend became one of the reasons for the Trump administration’s harsh reaction and the divisive political uproar it created in the United States

But options for Central American refugees are decidedly limited. Trying to relocate to immediate neighbors such as Venezuela and Colombia would not be much of an improvement, even if those governments did not expel interlopers. As noted, Venezuela is plagued by a comparable level of violence. Panama’s situation is only marginally better, while Colombia is just emerging from decades of civil war and trying to preserve a fragile peace settlement.

Mexico certainly does not welcome Central American arrivals. Indeed, refugees just trying to pass through that country on their way to the United States endure a gauntlet of violence and exploitation. Those who manage to avoid being raped or beaten are typically taxed by the ubiquitous drug cartels and human traffickers for safe passage. Many are pressed into service as drug mules to smuggle narcotics shipments into the United States.

Moreover, Mexico has daunting security problems of its own. The arrest of the leading drug trafficker, Joaquin (El Chapo) Guzman, in 2015 led to the fragmenting of the dominant Sinaloa cartel and a spike in bloody turf fights, both within that organization and among resurgent competitors. Mexico had a record 29,168 homicides in 2017, surpassing the previous record in 2011 during former President Felipe Calderon’s ill-starred drug war offensive by nearly 2,000 victims. The surge boosted the country’s homicide rate to 16.35 per 100,000 residents—now the twentieth in the world.

The drug cartels also seem to be targeting members of Mexico’s political elite to a much greater extent than before, fomenting even worse instability. Ninety-one political figures have been murdered just in the current campaign leading up to nation-wide elections on July 1. Various cartels warn office seekers that they do not control to “drop out or be killed.” Journalists also need to fear for their lives as a record number of them perished at the hands of the drug gangs in 2017.

It would be an exaggeration to say that Mexico is becoming a failed state. Such predictions have circulated before and proved erroneous. Mexico has significant societal strengths, including powerful stabilizing institutions such as the Catholic Church and a sizable (and growing) legitimate business community, that render that outcome a very remote possibility. Even so, the deteriorating security situation in Mexico is worrisome.

Conditions in Central America are far worse. One of the early warning signs of potential failed states is a massive surge in refugees. That is now taking place as record numbers flee the growing violence and general dysfunction in several Central American countries. The Trump administration's sterile policy of simply trying to exclude the increasing number of desperate people trying to find a haven in the United States does not even begin to identify the underlying problem. It is a situation that requires far more attention and sober thinking than it has received so far. America has an emerging humanitarian and security crisis in its neighborhood that must be addressed immediately.

Ted Galen Carpenter, a senior fellow at the Cato Institute and a contributing editor at the National Interest, is the author of 10 books and more than 700 articles on international affairs. His books include Bad Neighbor Policy: Washington’s Futile War on Drugs in Latin America (Palgrave Macmillan, 2003) and The Fire Next Door: Mexico’s Drug Violence and the Danger to America (Cato Institute, 2012).

Image: A boy holds a flower during the funeral of 16-year-old Karina Ivette Delgado in Ciudad Juarez February 3, 2011. Delgado was killed in a crossfire between suspected car thieves and federal agents on Sunday, according to local media. REUTERS/Gael Gonzalez (MEXICO - Tags: CRIME LAW OBITUARY)​