Why South Korea’s Place Is in the Quad 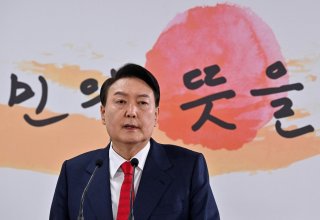 After winning one of the closest elections in South Korean history, opposition conservative candidate Yoon Suk-yeol looks set to overhaul his nation’s foreign policy and posture on the global stage. As part of his platform, Yoon called for deepening relations with the United States, advocated for a more rigid stance against North Korea via a “peace through power” framework that includes acquiring preemptive strike capabilities, and pushed back against Chinese threats to South Korea’s national interests.

With Yoon’s victory, the Biden administration has an invaluable opportunity to bring much-needed operational context to its vague vision for a “free and open Indo-Pacific” and simultaneously shape a coherent American strategy to confront the China challenge. Its recently released Indo-Pacific Strategy relies considerably on alliances, partnerships, and regional organizations. This identified necessity to shore up America’s multilateral alliance network in Asia has grown more critical in the wake of Russia’s invasion of Ukraine.

While a host of subject matter experts have aptly pointed out that “China is not Russia” and “Taiwan is not Ukraine,” it is the similarities between them, rather than the distinctions, that have caught the region’s attention. As the Indo-Pacific grapples with the implications of Russia’s unprovoked aggression against Ukraine, the Biden administration should follow Yoon’s lead and invite South Korea to join the Quadrilateral Security Dialogue (Quad). While China will not see it this way, to steal a phrase used often by its senior Party members, South Korea’s ascension to the Quad is “win-win cooperation”—a win for South Korea, the Quad nations, and the entire Indo-Pacific region.

Taiwan Is Not Ukraine, But Is It Close Enough?

Russia’s senseless invasion of Ukraine has sent shockwaves around the globe. Outside of Europe, they are being felt most severely in Asia. President Vladimir Putin’s unilateral decision to bring the most disastrous war to Europe’s doorstep since World War II has left many Asian governments uncomfortably aware that President Xi Jinping could singlehandedly bring similar chaos to their neighborhood.

Comparing Russia’s military adventurism in Eastern Europe over the past decade and a half to future Chinese aggression in East Asia is a helpful heuristic for understanding this unease. It also underscores the irreplaceable opportunity the disastrous events in Europe offer Asia: a look into the future. Rather than waiting for an inevitable cross-strait invasion by the People’s Liberation Army (PLA) at some unknown impending date, Taiwan and nations interested in seeing it remain free of China’s totalitarian grasp can take deliberate steps to prevent that eventuality. All members of the Quad and South Korea fall squarely into this camp.

Even states that cannot directly tie their interests to the freedom and sovereignty of Ukraine or Taiwan should take notice. Because the absolute and relative balance of power are almost always changed in response, it is a fallacy to assume that a nation will be sated after realizing seemingly minimalist geopolitical objectives. As evidence, Russia’s hostility toward Ukraine did not stop after it seized Crimea and destabilized the Donbas. Instead, it used these territories as a staging ground to build the combat power necessary to launch the more recent invasion. Regardless of the political or military outcome, Russian irredentism is unlikely to be limited to Ukraine. Likewise, it is highly doubtful that Chinese aggression would cease if it brought Taiwan under its control. Instead, it would use Taiwan to militarily threaten claims in the East China Sea and the South China Sea. Should it successfully gain control of these areas, China’s gaze will only look further afield.

Russia’s offensive in Ukraine was a catalyst for much-needed North Atlantic Treaty Organization (NATO) and European Union (EU) unity. Just as Finland and Sweden are reconsidering their membership in NATO, so too will select Asian nations rethink their alliance posture. The Quad should be the organization of choice for those that seek to push back against Beijing’s aggressive advances but individually lack the resources to match its might. Thus, rather than asymmetric bilateral engagements where China relies on structural advantages, the Quad can serve as the bulwark against Beijing’s belligerence that like-minded nations seek to align with and join where values and interests align.

Yoon is also prepared to upend Seoul’s relationship with Pyongyang. During a presidential debate in February, he remarked:

Peace can only be maintained when there is strong deterrence. A war can only be prevented by securing a preemptive strike capability and showing the will to pursue it. As we have seen in Ukraine, a country's national security and peace cannot be protected by paper and ink.

His willingness to reframe South Korea’s national security posture and foreign relations on the campaign trail speaks volumes about what his administration might portend. At a minimum, Yoon’s rise to power heralds a stark change from President Moon Jae-in’s priority of promoting amity toward North Korea at seemingly any cost. However, his maximalist objectives reach far beyond the pariah state to the north. South Korea is a proud democracy, economic powerhouse, and cultural heavyweight fueled by vast and innovative human capital. Yoon yearns for South Korea to cultivate a foreign policy and role in the international community commensurate with these realities. The declared foundation of this strategy is building a firmer relationship with the United States. Yet, a deeper partnership with Washington alone will prove insufficient to meet his ambitious aims. Yoon should widen the aperture to include Tokyo, Canberra, and New Delhi. Rather than simply participating in Quad working groups, he should seek South Korea’s membership in the organization.

An explicit requirement for Seoul to achieve Yoon’s dream of enhanced global standing is to divest its focus from Pyongyang and redirect it to other national priorities. This task will be tricky. Independent of geography, culture, and filial ties, Supreme Leader Kim Jong-un’s attention-grabbing antics, most often in the form of provocative weapon tests, are hard to ignore. President-elect Yoon was just uncomfortably reminded of that reality as North Korea tested a banned intercontinental ballistic missile (ICBM) for the first time since 2017. However, the responsibility to confront and respond to North Korean provocations should not fall to South Korea alone. South Korea’s ascension to the Quad would allow it to engage its northern neighbor via a regional grouping where all member states share similar geographic proximity and concern for the destabilizing force of a nuclear-armed North Korea. Rather than continuing to devote its finite diplomatic and military resources to a bilateral dynamic that has consumed its psyche for decades yet resulted in no noticeable progress, South Korea can ask the Quad to shoulder more of the burden for regional stability.

Suppose that Yoon can partially divest South Korea’s foreign policy and national security establishment from North Korea. In that case, he will have more assets to devote to what he sees as a long-overdue priority: recalibrating relations with China. Yoon laments Seoul’s past accommodation to Beijing’s economic retribution and compromise on what he views as South Korea’s “core security interests,” including challenges to its national sovereignty. While its decision to join the Quad will certainly draw Beijing’s ire, paradoxically, it will allow Seoul to chart a more independent geopolitical path that is less susceptible to Chinese coercion.

The Need to Expand the Quad

The United States has struggled under multiple presidents to articulate and execute a clear competitive strategy for dealing with a resurgent and revanchist China. For President Barack Obama, the emphasis was a “pivot” subsequently reframed as a “rebalance” that resulted in little change. In contrast, the solution was haphazard economic sanctions and tariffs for President Donald Trump, many of which he levied on allies and partners. President Joe Biden’s stated approach is leveraging America’s unmatched alliance system, though the goal of this plan remains unclear. Consequently, incoherence has been the only consistent aspect of America’s contemporary China policy.

Not wanting to feed China’s perpetual narrative that America holds a “Cold War mentality” toward its modern rise, the United States has firmly avoided an overt strategy of “containment 2.0.” Likewise, from a multilateral perspective, the overarching desire of both America and its regional allies and partners to avoid antagonizing China via establishing an “Asian NATO” has foiled the unified opposition necessary to check Beijing’s ambitions. It is time to rethink these sensitives. Many are already describing Russia’s invasion of Ukraine as the end of the post-Cold War era. The coming period of protracted strategic competition requires new dogmas and paradigms.

Confidently describing China’s preordained march to prosperity and power, Xi notoriously declared, “The East is rising and the West is declining.” Ironically, Xi’s “no limits” partner bet the house on this premise and lost it. Among many errors, Putin’s most costly misjudgment was his assessment of the West’s resolve to oppose him. Yet, the integrated response to his incursion was swift and merciless and significantly did not come via troop deployments to Ukraine. Contrary to Xi’s categorical account of the global geographical shift in power, the West is far from declining. However, what he should fear more than this miscalculation, is misreading the rise of the East.