Why States are Turning to Proxy War 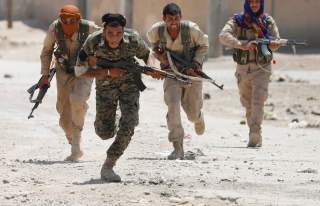 THE SYRIAN Civil War is the world’s bloodiest conflict, and much of the blame can be laid at the feet of Syria’s neighbors and the world’s major powers. So far, France, Iran, Israel, Jordan, Qatar, Russia, Saudi Arabia, Turkey, the uae, the United Kingdom and of course the United States have all intervened—and this long list of countries excludes the dozens of other coalition members that back U.S. efforts or otherwise played smaller roles. These states have bombed their enemies in Syria, provided money, arms and training to allied government or rebel groups, offered a safe haven to fighters, pressed their preferred cause at international fora like the United Nations, and otherwise used their power to help a local group that acts as a proxy for their interests.

Syria’s experience is not uncommon. Indeed, it is hardly an exaggeration to say that all of today’s major wars are in essence proxy wars. In Ukraine, Russia backs rebel groups who have proclaimed the Donetsk People’s Republic and Luhansk People’s Republic. Russia, Saudi Arabia and the uae back militia leader Khalifa Haftar, who seeks to control Libya while the United States notionally recognizes the rival government in Tripoli but works on a day-to-day basis with militias to fight the Islamic State in the country. In Yemen, Saudi Arabia and the uae back a motley mix of former regime military units, southern secessionists and tribal groups against Houthi forces, which Iran backs. In Afghanistan, Pakistan has long supported the Taliban, which has also received occasional support from Iran and Russia. The Congolese Civil War, which was the bloodiest conflict since World War ii, involved nine countries and twenty-five rebel groups.

Understanding the prevalence of proxy war is not hard. Proxies enable intervention on the cheap. They cost a fraction of the expense of deploying a state’s own forces and the proxy does the dying. Because the costs are lower, proxy war is also more politically palatable—few Americans know the United States is bombing Libya, let alone which particular militia it supports in so doing. Indeed, using proxies is that rare foreign policy tool that seems to fit the approaches both used by Donald Trump and Barack Obama to foreign policy. For all their differences, both presidents are skeptical about large-scale U.S. troop deployments yet promised to fight terrorism.

Despite their many advantages, proxies often disappoint their sponsors. Rather than be grateful and obedient, local groups often go their own way, pursuing their own interests while pocketing the money and other support they receive. Their competence is often minimal, while their brutality knows few bounds. Some even drag their supposed masters into unwanted interventions.

Proxy war, however, is not going away, and the United States must have its eyes open both when using proxies and when fighting them. Proxies are messier and often costlier than they appear. They can advance U.S. interests, but only when the United States approaches them realistically and structures its forces accordingly. Adversaries like Iran and Russia, for their part, also face problems with proxies, and better U.S. policies can exploit these divisions.

A proxy war occurs when a major power instigates or plays a major role in supporting and directing the fighting in another country but does only a small portion of the actual fighting itself. Proxy war stands in contrast not only to a traditional war when a state shoulders the burden of its own defense (or offense), but also an alliance, when major and minor powers work together with each other, making significant contributions according to their means. Washington’s close work with Kabul against what’s left of Al Qaeda and the Taliban more closely resembles a traditional alliance because of the major U.S. role, with thousands of American troops and hundreds of airstrikes. Meanwhile, Iran’s relationship with Houthi rebels in Yemen should be counted as a proxy war because Tehran primarily provides weapons and funding, not large numbers of its own troops.

In practice, proxy war is a spectrum, and in a conflict the balance between the forces of a sponsoring state and a proxy often changes. In Vietnam, the United States went from having several hundred advisers to support the South Vietnamese army in 1959 to the deployment of over 500,000 U.S. troops in 1968 to a small presence backed by massive U.S. airpower at the end of the war. If the bulk of a state’s military campaign is conducted through a proxy rather than with its own forces, then the proxy-war label works well. How much direct military support is too much to count as a proxy war is a bit in the eye of the beholder, but in general think the lower end of the involvement spectrum.

For countries like Iran, proxy war is the norm. In addition to using over 20,000 Shia foreign fighters from Iraq, Afghanistan and Pakistan in Syria, Iran backs the Lebanese Hezbollah, an array of Shia militias in Iraq and the aforementioned Houthis in Yemen, among others. Russia uses proxies in Ukraine, and the United States often does so in its operations in the Middle East and Africa, supporting Kurdish “People’s Protection Units” (YPG) against the Islamic State in Syria and working with armed groups in Libya to fight terrorists there. Indeed, much of the U.S. struggle against terrorism in parts of Africa and the Middle East involves working with local forces or governments to get them to more aggressively go after groups linked to Al Qaeda or the Islamic State. By design it is the proxy, not the United States, that is doing much of the lifting, with Washington providing intelligence and using special operations forces and drones to keep its footprint light.

The Cold War was rife with instances when the United States or the Soviet Union backed a local power or group to gain a more favorable position on the global chessboard, whether it was in Angola, Nicaragua or Afghanistan. Today, most proxy wars involve a substate group, with the sponsor’s primary efforts going to arm, train or otherwise help that group fight and gain power. At times, as in Yemen or Libya, one side may back “the government,” but in such cases the officially recognized regime is just one faction of many—and despite the international support on the ground, it is just another band of fighters.

States use proxies for many reasons. For the United States, the issue is often cost: locals fight, and die, so that Americans do not have to. In addition, because they are local, they are often (though not always) more accepted by the affected communities, can better gain intelligence from them by drawing on community ties, cultural knowledge and a common language, and are less likely to promote a nationalistic backlash that so often accompanies foreign interventions. If the proxy is a guerrilla force, they often know the terrain better and can blend in with the population in a way that foreigners never could.

For states like Iran, proxies are often the only option. Most states lack the power projection capacity of the United States and turn to proxies as a way to influence events far from their borders. Iran lacks a navy or massive airlift capacity necessary to sustain large forces in Yemen: supporting the Houthis gives Tehran influence there nonetheless. Even major powers like Russia lack sufficient air- and sea-lift capabilities, limiting Moscow’s ability to use its own forces far from Russia’s borders.

Proxies also offer a way of fighting that can limit escalation. States often deny they are supporting proxies—Russia, for example, claims not to be involved in Ukraine despite funding an array of groups opposed to the government of Kiev, arming them and supporting them with its own forces. At times, other states may genuinely not know about foreign support, or at least the extent of support, but in others it is a convenient fiction: not knowing or at least not having the support trumpeted publicly allows a state not to respond when it would prefer to avoid the matter. The United States cooperates with Pakistan on counterterrorism and operations in Afghanistan, and Islamabad’s denials of supporting the Taliban—despite having backed the group since 1994—allows a façade of amity. Deniability makes escalation harder, or at least limited to a certain arena. Israel, for example, has warred repeatedly against the Lebanese Hezbollah but has not struck Iran directly despite Tehran’s substantial financial and military support for the group. If Iran, rather than Hezbollah, attacked Israel with a missile, then Israel would feel compelled to strike Iran itself. This is especially important for Iran, which cannot match Israel economically, militarily or even diplomatically, given the Islamic Republic’s global pariah status.

For many states, however, factors other than cost and fighting power come into play. Some of Iran’s proxies, such as Hezbollah, are ideological soulmates, and advancing them helps advance Iran’s broader revolutionary agenda. Even in Yemen, where the Houthis remain far from loyal Iranian servants, support for their cause has moved them closer to Iran, with the Houthis at times trying to emulate Hezbollah in their style and propaganda. States at times back proxies because they enhance a leadership’s credibility at home: an array of Arab governments often backed Yasir Arafat or other Palestinian leaders, many of whom they loathed, in order to burnish their Arab nationalist credibility among their populations that saw the Palestinian cause as the beating heart of Arab identity. Similarly, Putin has used the Ukraine conflict as a way to burnish his nationalist credentials.