Why Taiwan Is America's Best Asset Against China 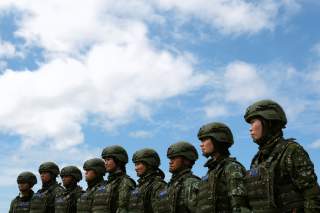 Notwithstanding Washington drama and parlor games, the biggest story of the decade is that America’s response to China’s economic and military aggression has changed dramatically. With bipartisan support in Congress, President Donald Trump has moved forcefully to toughen allied solidarity in the Pacific and to resist Chinese economic warfare. But Washington has overlooked one key asset in this fight—Taiwan—and often instead mistook it for a liability. This distinction is fundamentally important as we ponder the durability of the Chinese Communist Party amid an economic slowdown and as the world marks the thirtieth anniversary of the Tiananmen Square Massacre this week.

The island nation of twenty-four million free people is frequently threatened by China with reunification—a euphemism for military invasion and conquest, and an end to the de facto political independence that Taiwan has enjoyed since 1949. The United States doesn’t have a mutual defense treaty with Taiwan, but it is bound by a 1979 law to sell it the arms it needs for its defense—a standard previous U.S. administrations have usually failed to meet.

Previous U.S. messaging has also been dubious. For example, in 2004, Secretary of State Colin Powell went to Beijing and asserted that Taiwan wasn’t a sovereign nation. Additionally, Powell said the United States sought the “peaceful reunification” of Taiwan and China. In other words, leave your freedom at the door.

Armchair experts who have skimmed the Wikipedia entry on Chinese culture observe that Beijing’s rulers cannot afford to “lose face,” which would occur if Taiwan were to declare independence formally. Fair enough, but this sentiment is frequently extended radically to areas where Taiwan is left unable to secure its national interests.

Every year, China enhances its offensive military posture against Taiwan. Beijing also picks off more of the handful of remaining minor nations that have formal relations with Taiwan instead of China. This is important to note because official foreign relations are necessary for Taiwanese leaders to visit America (seldom Washington, DC) under the artifice of a “transit stop” on their way to state visits elsewhere.

Moreover, China prevents Taiwan from entering multilateral forums like the World Health Organization, and Taiwan’s status as something other than a real country often prevents it from securing trade deals with other nations or economic blocs like the Association of Southeast Asian Nations. On top of that, experts dismiss Taiwan’s protestations and efforts to rectify these problems as dangerously provocative toward China.

Past U.S. presidents of both parties have effectively adopted what Bill Clinton’s top Asia policy official called “strategic ambiguity.” When Chinese officials asked Joseph Nye what the United States would do if they attacked Taiwan, he said, “We don’t know and you don’t know. It would depend on the circumstances.” An endless academic debate over whether to make formal our implicit likelihood to come to Taiwan’s defense—and whether this would increase or decrease the chances of peace or create a moral hazard—has led nowhere.

It’s time to change the premise of the debate. Even without formally dispensing with the fiction of our forty-year-old “One-China Policy,” which supposes there is only one China and that Taiwan is a part of it, American policymakers can take a very different view of Taiwan that serves U.S. interests.

Most fundamentally, Washington should see Taiwan as a free society that puts the lie to the Chinese Communist Party’s ultimate claim of legitimacy. Throughout its seventy years of rule, the Party has justified its totalitarianism on the basis that any other form of government would lead to chaos and corruption—features that marked much of China’s history and which some historians blame for why greatness and global power have eluded the world’s most populous nation.

Taiwan is a living rebuke of this fiction. It shows that an ethnically Chinese-majority country can achieve stability and prosperity through democracy and the rule of law. Since Taiwan evolved into a full democracy in 1996, it has had three peaceful changes of power between political parties and its per capita income has grown to more than $50,000—now ranked twenty-eighth in the world. Furthermore, Taipei has achieved this despite persistent threats and intimidation from Beijing.

Also, Taiwan elected the first woman head of state in Asia who was not the relative or spouse of a previous president. It has grown from an impoverished low-tech manufacturing center to a diversified economy and creative society. Last month it became the first Asian country to legalize gay marriage, and unlike the United States, did so through a vote of its national legislature. Taiwan also protects the rights of ethnic and religious minorities, whereas China may have as many as three million Muslims in political reeducation camps at the present time.

Democratization has allowed Taiwanese to develop a pro-Taiwan identity that no longer rests on a thin, race-based notion of ethnicity. In addition, like most democracies, Taiwan seeks peace with its neighbors.

Every time that Chinese officials rationalize or justify the subservience of law to the whims of the Party, every time they lock someone up for having the wrong views or worshipping the wrong God, every time they run over protesters with tanks in the name of social harmony, every time they threaten their neighbors with military force, Taiwan stands as an example of a different and better way for ethnically Chinese citizens to govern themselves.

In the free world’s long competition with China’s government, America should put Taiwan in the spotlight, not treat it like a liability. It represents the future everyone should want for China—a future that would be marked by collaboration rather than confrontation with America and the rest of the free world.

For starters, Washington should put an end to infantile diplomatic insults to Taiwan, like prohibiting Taiwanese exchange cadets at U.S. service academies from wearing their uniforms, and not allowing Taiwanese diplomats to come to important meetings at the White House, State Department, and Pentagon. America should call its respective embassies and ambassadors what they are instead of the stepchild legation known as the “American Institute in Taiwan,” and get rid of its useless domestic outpost in Arlington, Virginia. Consider the advanced talks Washington has held with Iran and North Korea—countries with which America does not have formal diplomatic relations. Surely the United States can afford the same courtesy to a democratic friend.

Policymakers should also implement congressional legislation that calls for exchanges of senior members of each country’s government, including military flag officers. The forced estrangement of the U.S. and Taiwanese militaries is dangerous and leaves an obvious force-multiplier against Beijing gathering dust on a shelf—what is needed is a joint command like the ones America has with Japan and South Korea.

Finally, Washington should negotiate a formal trade agreement with Taiwan. This too can be a model for China, considering it could include all of the intellectual property protections and other provisions to which Beijing has balked at agreeing.

None of this amounts to a “regime change” policy toward China per se. But it would reprise the nonviolent cultural warfare America waged against the Soviet Union even as Washington negotiated at times with Moscow during the Cold War. Spotlighting the benefits of an alternative to your opponent’s political system can be smart statecraft. In America’s long contest with China’s government, Washington should do so whenever practicable.