Why Taiwan Belongs in the World Health Organization (WHO) 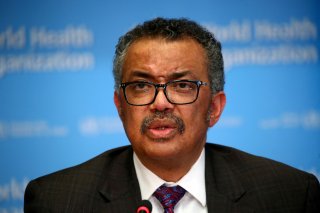 On March 28, 2020, a respected Canadian epidemiologist working at the World Health Organization, Bruce Aylward, was asked about Taiwan’s membership in the WHO. First electing to feign deaf, Aylward later terminated the call, and then ended the interview.

Aylward’s response was not entirely at fault. It was symptomatic of a larger, systemic inability to meaningfully discuss the status of Taiwan at the WHO, or the potential that it be invited as an observer.

The WHO, established in 1948, lists in its very founding documents the phrase: “The enjoyment of the highest attainable standard of health is one of the fundamental rights of every human being without distinction of race, religion, political belief, economic or social condition.”

Yet for much of the past half-century, Taiwan has essentially been shut out of the organization, with few options for recourse for its twenty-three million people, which the People’s Republic of China claims, but does not represent.

Following Aylward’s exchange, the WHO released a statement disavowing that the Secretariat had the authority to decide on Taiwan’s status. It stated: “The question of Taiwanese membership in WHO is up to WHO Member States, not WHO staff.”

The glaring omission from this statement is that for the past three years, Taiwan has not, in fact, pursued membership in the organization, but instead observer status at the World Health Assembly, the annual meeting of the WHO.

And despite the WHO’s leading comments to the contrary, there is a broad authority within the secretariat to grant Taiwan observer status, which the current director-general, Dr. Tedros Adhanom Ghebreyesus, has chosen not to exercise.

While this is not immediately clear in a cursory reading of either the WHO Constitution, which makes no mention of observers or the WHO’s Rules of Procedure, this is nevertheless evident in past practice with respect to the Holy See, the Order of Malta and a number of NGO observers.

As former WHO Legal Counsels Gian Luca Burci and Claude-Henri Vignes have postulated, “the Director-General always considered that, by analogy with the provision of Rule 3, he was vested in discretionary power to issue an invitation” to observership, referring to the WHO Rules of Procedure.

This formed the basis for the Holy See to participate as an observer in the WHA in 1949, and the Order of Malta starting in 1963, notably without determination of its statehood. It also enabled NGOs such as the International Federation of Red Cross to become “quasi-permanent observers” over time.

Burci and Vignes added that in each of these examples, “the Director-General did not consult with the [World Health] Assembly but decided on his own.”

This is further supported by then Director-General Margaret Chan’s decision to invite Taiwan as an observer between 2009 and 2016, which ended only after voters in Taiwan elected a different administration into office.

In fact, a WHO spokesman made clear following the issuance of the invitation in 2009 that “the invitation of Taiwan to the WHA is not based on any particular regulation. The WHO Director-General has the authority to invite any entity which carries out functions in the field of public health.”

Although Chan later stated in her final invitation to Taiwan that participation would be based on a “one China” principle, no such condition had been expressed in her prior exchange of letters to the Taiwan government between 2009 and 2015.

While the authority for the director-general to invite observers into the WHA, irrespective of their political determinations, can be established, there are admittedly additional complicating factors for Taiwan.

The first is the WHO’s oft-cited WHA Resolution 25.1, which mirrors UN Resolution 2758 in recognizing the PRC as the sole legitimate representative of China.

Sidestepping the question of whether the resolution, which does not mention Taiwan, effectively settles the question of Taiwan’s status in the WHO, it is nevertheless clear that invitations for observership in the WHA need not constitute political recognition, as the case of the Order of Malta shows.

The second is a secret memo signed between the WHO Secretariat and Chinese officials in 2005. The memo covered a wide range of procedures and restrictions on Taiwan’s participation in technical activities, as well as on potential WHO support for Taiwan in the event of a public health emergency.

Yet it makes no mention of Taiwan’s participation in the WHA, short of stating that there is an “obligation for the Secretariat of refraining from action which could constitute a recognition of a separate status of Taiwanese authorities and institutions,” which, again, observership in the WHA arguably does not do.

The third, and perhaps the most difficult factor to assess, is to the extent the WHO Secretariat has relegated decisions concerning Taiwan to the People’s Republic of China (PRC), including on issues of observership in the WHA that have traditionally been within its purview based on past practice.

As Chan admitted following her departure in 2017, she had “communicated with the Beijing government and gained approval to invite Taiwan as a non-voting observer only after it recognizes the ‘one China’ policy,” referring to the PRC’s desired political framework for Taiwan.

While the third factor may be impossible to determine without knowledge of the full extent of the WHO’s secretariat’s exchanges with the PRC, such engagements, and to the extent that they transpired, would be inherently political as opposed to legal, and outside the scope covered by this article.

The point here is not to argue that the WHO has a legal obligation to invite Taiwan to participate as an observer in the WHA. Far from it. Instead, it is to highlight the background that shows the WHO secretariat, and the director-general in particular, have a legal capacity to do so, if they so desire.

But by the same token, it can be argued that the failure to invite Taiwan is also a political, rather than a legal, determination. And such a determination carries profound significance given the spirit of the WHO Constitution, as well as the organization’s stated aim to provide health for all.

Given Tedros’s public call for countries to avoid politicizing public health pandemics, the very same standards should arguably apply to the WHO. The organization should, in the interests of global health, stop politicizing the issue of Taiwan’s participation in the WHA.