Why the Army Isn't Prepared for the Next Great War 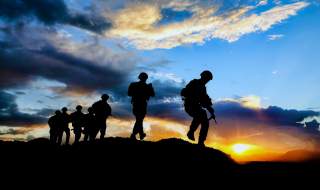 Next week the Senate Armed Services Subcommittee on Airland will hold a hearing on Army modernization. Just twelve months ago, in a similar hearing, the U.S. Army was, according to its own senior leaders, in dismal shape. The question for the senators, who oversee Army readiness to deploy and fight, is whether anything has really changed since February 2017. The recent past explains why.

Secretary of Defense Donald Rumsfeld famously said, “You go to war with the army you have.” Like a stopped clock that’s right twice a day, Rumsfeld was correct. Wars are seldom decided in a single, dramatic battle or by the appearance of a new, alleged “leap ahead” technology. Wars are decided in the decades before they begin; through years of innovative field experimentation and rapid prototyping based on rigorous analysis and historical study.

Rumsfeld was lucky. Instead of fighting in “the Super Bowl,” the U.S. Army confronted a “pick up team” consisting of Afghan and Arab insurgents. Without armies, air forces, air defenses or modern intelligence, surveillance and reconnaissance (ISR) assets, the insurgents were too weak to seriously threaten America’s Cold War legacy Army.

Joint operational maneuvers on the scale of the 1944 breakout from Normandy or offensives to penetrate sophisticated air defenses like those the Germans built—operations that cost the U.S. and British Air Forces eighteen thousand bombers—were not required. Unfortunately, military “success” against pickup teams sets up armies for failure in the Super Bowl.

In 1940, Gen. Maxime Weygand, the supreme commander of French Forces, told a room of shocked politicians and generals, “We have gone to war with a 1918 Army against a German Army of 1939. It is sheer madness.” Weygand should not have been surprised.

After World War I, senior military leaders in the French and British Armies were compelled to concentrate on low-intensity conflict: suppressing rebellions (counterinsurgency) in from Africa to Southeast Asia while the armies they commanded transformed into colonial police forces. Superior French and British military technology and organization from World War I triumphed, but experience in hard-fought campaigns against non-state insurgent enemies between 1918 and 1936 did not transfer to war with the Wehrmacht or the Imperial Japanese Army.

Just five years after World War II, American soldiers endured a similar experience. Gen. Matthew Ridgway, the eighth Army commander in Korea, concluded that the primary purpose of an army—to be ready to fight effectively at all times—was forgotten. In the aftermath of the worst war in human history, American soldiers were as unprepared for the enemies that faced them in Korea as the French and British were for the Germans in 1940.

Today there is a growing concern in the halls of Congress that the U.S. Army is on this familiar path. Members worry because the Army’s senior leaders are conditioned to low-intensity conflict while America’s potential opponents in Russia and China are preparing for the Super Bowl. America’s potential opponents are reorganizing their ground forces to exploit new technologies within the operational framework of ISR-STRIKE.

New mobile armored battlegroups designed for high-intensity conventional warfare are emerging inside the Russian and Chinese Armies that mark a dramatic departure from the structure and thinking of their Cold War predecessors. The new fighting formations integrate loitering munitions or “Kamikaze Drones” with the precision strikes of devastating rocket artillery. Both weapon systems and warfighting concepts are finding their way into many foreign armies. All of these developments must be viewed in the context of integrated air defenses; systems that seriously degrade, even, cancel out American air supremacy.

The problem is that after years of service inside the U.S. military’s cutthroat bureaucracy, senior officers can recite the lessons of the past, but very few can grasp their future implications. Even fewer are prepared to alter the status quo to secure victory in the future.

Keep in mind that in a succession of Army chiefs of staff unveiled expensive new “transformation” programs purported to modernize the World War II/Cold War Army. They were hallucinations. The goal was to preserve as much of the old institutional status quo as possible by papering over deficiencies and maintaining existing career patterns. Meanwhile, senior officers hammered bits of new technology into the old organization for combat to create the illusion of change.

In The Innovator’s Dilemma, Clayton Christensen argued that private sector corporations must create specialized, autonomous organizations to exploit new technologies or risk squandering revolutionary capabilities inside status quo organizations. In view of the billions of dollars lost on failed Army modernization programs, Senators may want to consider establishing a special-purpose organization that is not subordinated to the Army hierarchy; a joint organization designed to field new, ground-combat formations for joint warfare.

The lessons are unmistakable: If you prepare for a sandlot pickup team and you go to the Super Bowl, you lose. And, equally important, armies cannot reform themselves.