Why the Landing Craft Air Cushion is Crucial to the U.S. Marines’ Amphibious Operations 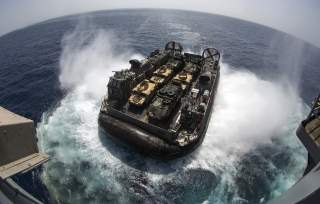 Most discussions of future U.S. amphibious warfare capabilities focus on ships, planes, helicopters and vehicles. The Navy is building modern amphibious warships such as the LPD-17 class and planning for the future LX(R). A dramatic improvement in Marine Corps aviation is occurring with the deployment of the first squadrons of the short-takeoff, vertical landing variant of the F-35 Joint Strike Fighter. The F-35B is being deployed on the Navy’s LHA and LHD amphibious assault ships, which have flight decks. The Marine Corps is investing heavily in its rotary wing fleet with the MV-22 Osprey, AH-1Z Viper, UH-1Y Venom and new CH-53K King Stallion heavy lift helicopters. Finally, the Marine Corps’ amphibious combat vehicle program will provide new fighting platforms that will eventually be able to self-deploy from ships at sea to the beach.

For the foreseeable future, in order to get significant forces from ship-to-shore the Marine Corps will rely on the Navy’s fleet of specialized vessels, the Landing Craft Air Cushion (LCAC). First deployed in 1984, the LCAC revolutionized amphibious operations. The LCAC is a high-speed air cushion platform that floats just above the water. It is capable of carrying heavy payloads and large numbers of Marines from the well deck of an amphibious ship stationed up to 100 miles at sea not just to the water’s edge but over the beach. With a cargo capacity of up to 70 tons, the LCAC is able to carry the heaviest vehicle the Marine Corps possesses, the M-1 tank, at speeds approaching 40 nautical miles an hour.

The LCAC is designed to be carried and operate from all Navy amphibious ships that possess a well deck. This is a large, enclosed space located in the stern of many amphibious warfare ships, which allows LCACs, amphibious vehicles and boats to load men, vehicles and supplies directly from the ship’s interior. Once fully loaded, LCACs can move rapidly across the water and over the shore, delivering large numbers of Marines, their combat gear and fighting vehicles into battle. LCACs also can conduct evacuation support, lane breaching, mine countermeasure operations, and Marine and Special Warfare equipment delivery.

It is increasingly clear to the Navy and Marine Corps that the character of amphibious operations must change in response to the proliferation of both advanced intelligence, surveillance and reconnaissance systems and long-range, precision guided weapons. The challenge for the Sea Service is to put large forces ashore rapidly and in fighting condition. This movement must be achieved quickly and from ships operating well out at sea. The Marine Corps had hoped to accomplish this objective by acquiring new armored fighting vehicles that could make long transits to shore at high-speed. It will not be possible to achieve this goal for some years to come.

The Navy realized that it had to recapitalize its fleet of LCACs in order to meet the changing demands of amphibious operations and a Marine Corps force structure that was growing in both weight and complexity. The new Ship-to-Shore Connector (SSC) is an evolutionary advance over the venerable LCAC. The SSC will have an increased payload, greater reliability, higher availability and reduced operating costs. In addition, the SSC will come equipped with more powerful Rolls Royce engines and a new command, control, communications, computers, and navigation (C4N) suite by L-3. This will improve navigation and tactical responsiveness while reducing manning requirements.

One unusual feature of the SSC is that it was designed by the Navy. The Navy Design Team conducted an evolutionary design process that included formulating craft level requirements and specific system level functional requirements documents. In addition, the Navy made reliability a key factor in its design of the SSC. According to a senior official of Textron Land and Marine Systems, the company which won the competition to build the SSC, “When the Navy did the concept design for the new Ship-to-Shore Connector, they took the top 25 reliability issues from the LCAC, they designed those out – things like going from four gear boxes to two gear boxes, four lift fans to two lift fans, the orientation of the engines, the aluminum selection.” As a result, the SSC will be easier to maintain and cheaper to operate than the LCAC.

Textron Land and Marine Systems has completed the first new SSC. In addition, it has provided the Navy with an important enhancement to its industrial base. Textron invested about $45 million to upgrade its New Orleans, Louisiana production facility with an automated welding capability and other innovations that cut time and cost. Textron also invested in production improvements by some of its most important suppliers.

Perhaps someday the Marine Corps will have high speed armored amphibious vehicles that can not only move rapidly from ship to shore while carrying a squad of Marines but conduct high intensity combat operations once they arrive. Until that day, the LCAC and its successor, the SSC, will serve as the critical link between the amphibious warfare fleet at sea and the Marines on land.