Why the Northeast Is Trump Territory 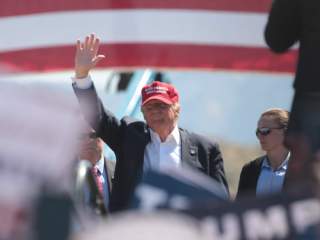 The question in Tuesday’s New York Republican primary wasn’t whether Donald Trump would win, but whether he would win all ninety-five delegates. The answer was technically no, but it may as well have been yes. The Donald’s rebellion roared through the Empire State, securing more than 60 percent of the vote thanks to broad support from Buffalo to Montauk. Only in Manhattan, under the ironic shadow of Trump Tower, did John Kasich manage to squeak out a win.

The night’s most obvious loser was Senator Ted Cruz, who had his worst primary showing in months, pulling in only 14.5 percent of the vote and adding not a single delegate to his count. Team Cruz will tell you this was the result they were expecting—and they’re no doubt bracing for more bad news before April comes to a close. We’re in the middle of the Acela primary, or Hell Week as Cruz might call it, during which six northeastern states with Trumpophile GOP bases head to the polls. In New York, 95 delegates were at stake; next Tuesday, Connecticut, Rhode Island, Pennsylvania, Delaware, and Maryland will offer up 172 delegates.

It’s likely to be a Trump rout, and not a small one. Recent polls show the billionaire with mammoth leads in three out of the five impending contests, and that’s only because no one’s checked on Rhode Island and Delaware lately. Cruz’s best performance could be a single second-place finish in Pennsylvania. He’ll pick up at best a tiny smattering of delegates. The Northeast clearly remains Cruz’s Bermuda Triangle—he’s won only Maine, the South of the North, whose anomalous and lightly contested caucus offers an opening for dark horse candidates.

Part of this is surely a regional bias: at least Trump is a homegrown boy, unlike that southern-fried rabble-rouser from Texas Ted Cruz. But to dismiss Cruz’s struggles as originating from nothing more than antipathy to southern conservatism is to do the deeply complex Northeast an injustice. Hollywood obsessions aside, the region is far more than louts from Greenwich, cawps from Southie, and stagnating Millennials who torment each other in Brooklyn flats. Vast swaths of the region—from Connecticut’s eastern half to Maryland’s western waist to most of New York—are rural, economically besieged, and even inclined to vote for a Republican now and then, provided he doesn’t make any sudden movements.

This is the Northeast you rarely hear about, the one that never fully recovered from the recession, or even deindustrialization. Connecticut, under inept Democratic leadership, remains immersed in a budget crisis that two rounds of tax hikes failed to resolve; meanwhile, residents are leaving faster than from any other state, and fewer than three quarters of the jobs lost in the economic downturn have been recovered. Neighboring Rhode Island is equally troubled. And so beleaguered are some upstate New York towns that they’ve considered seceding to Pennsylvania, where at least it’s legal to frack (though even in the Keystone State, the recession still lingers).

So while cash registers clang in Texas and the Midwest booms thanks to shale oil, the Northeast is fertile ground for Donald Trump’s message. There, America really does want to be made great again, whether the cause is China or illegal immigrants or urbane liberal elites who insist on governing Garbutt like it’s Manhattan and Holyoke like it’s Boston. The culture seems to need some tough love, too, as heroine dealers descend and gentle New Englanders in pastoral towns lock their doors for the first time.

Trump’s message of fury at rapacious outsiders holds far more appeal for these voters than Cruz’s carefully arranged conservatism. You can argue that Trump is the wrong vessel for this (or any other) desire for improvement, but it’s difficult to argue with the desire itself.

Back to crass politics, expect the media, which was humming Trump’s requiem a couple weeks ago, to dutifully swing back towards the opposite extreme and question whether Cruz can even force a contested convention. My sense is they were right the first time. Cruz’s superior delegate wooing and strong ground game in California means Trump probably won’t clear the 1,237 threshold. Then it’s on to a brokered convention with its hallmarked backbiting and back-room agreements. And isn’t that just the sort of thing the Northeast is rebelling against?