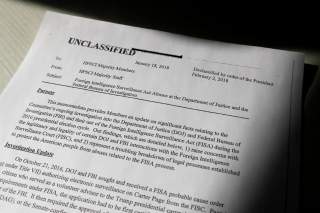 In the midst of the 2016 election, bad actors at the Justice Department tried to turn the FBI into the police arm of the Democratic National Committee (DNC). That’s the bottom line of the January 18 House Permanent Select Committee on Intelligence memo released today. The document reveals that a Foreign Intelligence Surveillance Court (FISC) was led, or misled, into authorizing spying on Carter Page, a Trump campaign volunteer, on the basis of information provided by Christopher Steele, a British spy-for-hire working for the opposition research firm Fusion GPS—which was itself ultimately working for the DNC.

FBI and Justice Department officials failed to reveal this context to the FISC, according to the memo, “even though it was known by DOJ at the time that political actors were involved in the Steele dossier.” James Comey and Andrew McCabe, then the FBI’s director and deputy director, were among the officials who signed requests for authorization and renewal of surveillance of Page. Sally Yates and Rod Rosenstein, both deputy attorneys general at the time, also signed requests.

The memo also reveals that the innuendo Steele promoted on behalf of the DNC became a hall of mirrors, in which one set of claims was echoed and amplified by strategic media leaks that were based on the very same source of misinformation: Steele himself. To corroborate information about Page that Steele had given to the FBI, the request for authority to spy on Page relied on a second source, a September 23, 2016 Yahoo News story by Michael Isikoff. But as the House committee’s memo reports, “This article does not corroborate the Steele dossier because it is derived from information leaked by Steele himself to Yahoo News.” Steele was eventually “suspended and then terminated as an FBI source” because he disclosed his contacts with the FBI to another journalist, David Corn of the left-leaning Mother Jones. No doubt Steele’s talk about his role as an FBI informant added an aura of authority to the tales he shopped around.

Were the FBI and Justice Department officials in question simply negligent in failing to inform the FISC about the partisan background to the claims Steele was making? The memo reveals that “before and after Steele was terminated as a source” by the FBI, he was in contact with then–Associate Deputy Attorney General Bruce Ohr, “a senior DOJ official who worked closely with Deputy Attorneys General Yates and later Rosenstein.” Steele told Ohr that he “was desperate that Donald Trump not get elected and was passionate about him not being president.” As it happens, Ohr’s wife was an employee of Fusion GPS and working on anti-Trump opposition research for the firm, research also ultimately paid for by the DNC and Clinton campaign. “The Ohrs’ relationship with Steele and Fusion GPS was inexplicably concealed from the FISC,” the memo relates.

Steele and Fusion GPS were the sine qua non for authorization surveillance of Page. The memo concludes that while the FISC application “relied on Steele’s past record of credible reporting on other unrelated matters, it ignored or concealed his anti-Trump financial and ideological motivations.” What’s more, “Deputy Director McCabe testified before the [House Select Committee on Intelligence] in December 2017 that no surveillance warrant would have been sought from the FISC without the Steele dossier information.”

Steele was well-rewarded for his efforts. He received over $160,000 in payment from Fusion GPS and the law firm Perkins Coie, both of which channeled the money from the DNC and Clinton campaign. The Foreign Intelligence Surveillance Court did not hear about that, nor was it told that, as the memo reports, “the FBI had separately authorized payment to Steele for the same information.”

How the Steele dossier was used to draw an only selectively informed FISC into authorization surveillance of Page is the main thrust of the memo. But it notes that the Page FISC application also touches on information related to another Trump adviser, George Papadopoulos. “The Papadopoulos information triggered the opening of an FBI counterintelligence investigation in late July 2016 by FBI agent Pete Strzok,” the memo notes, another official with a distinct partisan bias. “Strzok was reassigned by the Special Counsel’s Office to FBI Human Resources for improper text messages with his mistress, FBI Attorney Lisa Page (no known relation to Cater Page), where they both demonstrated a clear bias against Trump and in favor of Clinton, whom Strzok had also investigated,” the memo continues. “The Strzok/Lisa Page texts also reflect extensive discussions about the investigation, orchestrating leaks to the media, and include a meeting with Deputy Director McCabe to discuss an ‘insurance’ policy against President Trump’s election.”

How much DOJ and FBI misbehavior here is incompetence rather than malice is hard to say: it’s certainly a matter that bears congressional investigation and public scrutiny in the press, as well. Bias in law-enforcement is, in other contexts, something that progressives and civil libertarians of the left claim to be concerned about to the utmost degree. But the rule of law must be nonpartisan as well as colorblind, and the abuses documented in this memo call for deep scrutiny of the FBI officials in question and the procedures that allow politically paid and motivated actors like Steele to turn America’s law-enforcement and intelligence apparatus into an instrument for partisan purposes. Steele, of course, claims higher motives. Skepticism is in order. Who investigates the investigators? That’s the job for the media and Americans’ duly elected representatives. The House Permanent Select Committee on Intelligence has done its duty by releasing this devastating memo.

Image: A copy of the formerly top secret classified memo written by House Intelligence Committee Republican staff and declassified for release by U.S. President Donald Trump is seen shortly after it was released by the committee in Washington, February 2, 2018. REUTERS/Jim Bourg​