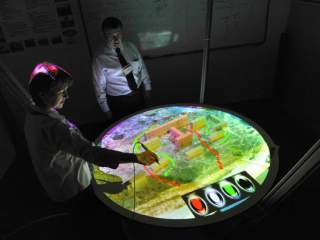 It’s a great time to be a Pentagon game nerd.

Long dismissed as the geekier side of the military, war gaming is suddenly in demand, after the Department of Defense realized that if it wants to devise a strategy to beat China and Russia, it needs to play games.

Last year, Deputy Secretary of Defense Robert Work issued a startling directive demanding the military conduct more wargaming. Work’s eye is on an important prize: a new “offset strategy” for the twenty-first century. The First Offset Strategy, in the 1950s, relied on nuclear weapons to stop massive Soviet ground forces, while the second strategy of the 1970s emphasized smart weapons to stop the Red Army. Now the focus is on a Third Offset Strategy to discover technologies and tactics to neutralize an imposing spectrum of new threats, such as ship-killing hypersonic missiles, cyberwarfare and terrorism (for my deeper analysis of the Pentagon directive, go here).

Yet in an era when a single jet costs more than a $100 million dollars, and a new aircraft carrier costs $13 billion, mistakes aren’t cheap. Like all nations in history, the United States must guess what the next war will be like and plan its force structure accordingly. And that’s where war gaming comes in. Games can’t predict the future like a crystal ball. Don’t believe anyone who says they can. But games can offer insights and guidance on what weapons to buy and how to use them.

To be clear, we are not talking flesh-and-blood soldiers engaging in mock combat at Fort Polk, or video games that teach troops basic skills, or even computer models that calculate the lethality of a new missile. What the Pentagon wants is analytical war games to explore how conflicts might be waged, what weapons an adversary might unleash and what technology the United States needs. Despite the popular image of sophisticated supercomputers in movies like 1983’s WarGames, analytical war games are often a BOGSAT (bunch of guys sitting around a table) simulation where people pretend to be the Russian government or the Chinese Navy or whatever the scenario demands. The designers of these games tend to be the sort of people who think it wonderful to spend a gorgeous summer afternoon in a dark basement, playing a board game as they refight Waterloo or Jutland.

War games and the military go back a long way. Chess was invented in India almost two thousand years ago as a game of military strategy, and the Germans used Kriegsspiel to train their elite General Staff officers. More relevant to the current U.S. strategic dilemma is how the U.S. Naval War College used wargames in the 1930s—including model ships maneuvered on the floor—to develop the war plans that eventually defeated Japan in 1945.

Yet as Work said in his directive, “I am concerned that the Department’s ability to test concepts, capabilities, and plans using simulation and other techniques—otherwise known as wargaming—has atrophied.” To fix the problem, the Department of Defense has requested $55 million for war gaming in fiscal year 2017, which is still a drop in the bucket compared to the nearly $600 billion the Pentagon spends now.

Whether that money will be spent wisely remains to be seen. Commercial war games, designed and played by hobbyists (in the interests of full disclosure, I’m one of them), are a cheaper and quicker alternative to the Pentagon’s habit of awarding contracts to the big defense firms. Some commercial war game designers, for example, have produced remarkably sophisticated simulations of counterinsurgency conflicts such as Vietnam. Networking technologies should make it easier to bring together diverse and geographically distant decisionmakers and experts for gaming.

But what ultimately counts is the human dimension of war gaming. What games and war have in common—and what makes war gaming so valuable—is that they are a competition of wits in which the participants use every last bit of cunning to beat their opponent. Mathematical models may be fine for estimating how many F-35s or aircraft carriers America needs. However, a conflict in the South China Sea or eastern Europe will be instigated by humans and waged by humans, and therefore should be gamed by humans too.

But the flip side is that humans resist things that disagree with their conceptions. Stories abound of war games, such as those the Japanese conducted prior to Pearl Harbor, in which the results were dismissed because they conflicted with the expectations or preferences of the players.

But that’s what defense war gaming is about: telling us what we don’t want to hear, so that we can be better prepared for when real life doesn’t turn out the way we expect. We ignore those lessons at our peril.