Why the Recent Market Shock Does Not Rattle America's Economic Stability 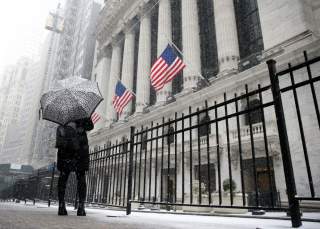 Markets go up and down. Though, for a while, it did not seem that way. For the better part of a year and certainly since the tax package was passed, U.S. markets were nearly a one-way street. Over the past few days, the calm came to an abrupt halt.

The question of why it came to such a sudden end is an open question. It may have been Friday’s jobs report that showed wage growth rose at a surprisingly quick pace. In turn, this led to increased inflation expectations, and therefore the potential for quicker interest rate increases from the Fed. This inflation spiral gave markets pause, and investors rethought their positioning which led to the market sell-off.

There is some credence to that argument. But it lacks the necessary evidence to be convincing. Most notably, if inflation expectations were the reason for the sell-off, then they should be high. Granted, inflation expectations have moved back to 2 percent after being much lower during the summer of 2017, but only back to 2 percent, below where they have been for most of the recovery.

And this is the odd part about this market shock. It really does not appear to be connected to fears of a recession. Instead, it is tied to fears that the global economy might be too good. When framed in that context it makes a bit more sense that markets could become wary.

The current economy and the outlook for the economy are both strong. This is being translated to the market as well. According to Bloomberg, analysts are expecting S&P earnings to be approximately $155 for 2018—more than a 25 percent leap from 2017. Much of that is due to tax reform, but some is a result of a faster pace of economic growth.

Of note, the expectation for S&P 500 earnings has not decreased during the sell-off, meaning that valuations have decreased substantially (and quickly). Therefore, markets are declining, and so too are multiples.

It should be pointed out that the estimated GDP growth from the Atlanta Fed is 4 percent for the first quarter. Not long ago, the estimation was for more than 5 percent. While the estimates the pace of growth in the first quarter will change, and possibly move lower, it is difficult to see it going down too much. Remembering the disappointment associated with first-quarter growth in recent years, it is easy to write this off as a fluke. This time there are reasons to take it seriously.

Backing up the narrative of a strong economy are the widely followed and timely ISM services and manufacturing surveys. For perspective on the fundamental strength of the economy, the last time the manufacturing survey was at this was 2004, and the services survey is at 59.9 higher than it was during the 1990s. Anything above fifty is indicative of an expansion, and the current levels point to 4 percent to 5 percent growth.

There may be something to the narrative of “it’s too good to last.” The underlying U.S. economy is currently growing at a clip that will be difficult to sustain in the medium-term. Actually, this might be the redeeming quality of U.S. growth—it will not last that long at this pace. The fear of runaway inflation and wages is predicated—at least to a degree—that the U.S. economy will grow at a rapid clip for an extended period.

An extended period of supercharged growth would increase the chances that inflation and wages began to spiral more than the market or Fed cared to see. But a year or so should not have this effect (at least to an alarming extent).

Market pullbacks happen, but it is difficult to blame this one on the economy.

Image: A woman looks up as snow begins to fall in front of the New York Stock Exchange, (NYSE) during the morning commute in New York City, U.S., February 7, 2018. REUTERS/Brendan McDermid