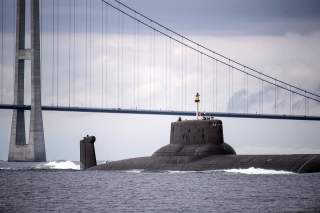 Russia still depends on the remnants of a blue-water navy inherited from the Soviet Union, but a new force is slowly rising to take its place both above and beneath the waves. This navy will be different, with a strategy of its own. The United States should not fear the Russian Navy, but it should respect and study what Moscow is trying to do with its naval forces. Failure to understand an adversary’s capabilities, and the logic behind them, is a good way to someday become unpleasantly surprised by them. Learning from that kind of experience usually comes at the expense of lives.

Imagine in a not so distant future a group of Russian Kalibr missiles closes in on a U.S. destroyer at supersonic speed, sprinting to target in their terminal phase. In this moment the captain will find little comfort in the stack of articles behind him arguing that the Russian Navy is no more. That Russia had spent so little on the corvettes that fired this salvo, and the United States so much on the ship about to receive it, will leave a great deal to reflect upon in the aftermath.

Analysis of Russian military capabilities tends to either portray the Russian military as a giant or as though it were on the verge of disappearance. These narratives trend towards the factually incorrect and profoundly unhelpful. This is why we study adversaries: to understand their strategy, doctrine, and the capabilities they’re investing in so as not to speak nonsense to power, but instead offer sound analysis and perspective.

The modern Russian Navy is not designed to compete with the U.S. Navy, but instead to counter it, and to support the strategy of a twenty-first-century Eurasian land power. Russia may be far less powerful than the Soviet Union, but it remains a great power nonetheless, with a military capable of achieving overmatch on its borders. Russia’s armed forces are strong enough to impose substantial costs in a conflict, and the country fields a capable nuclear arsenal that it won’t shy from using. The Russian Navy plays an important role in that strategy, and should not be overlooked despite its shortcomings.

Things would be simpler were Russia engaged in a futile attempt to compete with U.S. Navy, overspending on ships it can’t afford, pursuing missions that make little sense given the country’s geographical position and economic constraints. The recently signed Russian Naval Doctrine through 2030 makes bold claims about Russia’s desire to maintain the status of the world’s second naval power. While the Russian nuclear submarine force still holds second place in capability, and its ballistic missile submarine (SSBN) fleet in particular, there is no shipbuilding plan to turn the navy into a global competitor with the United States or China.

Such pronouncements reflect the tradition of Russian leaders looking to the navy for status projection on the international arena, as a prominent symbol that Russia is a great power, able to show the flag far from its geographical confines. We need to look skeptically at official statements designed to make the Russian Navy feel more secure about its relevance (and budget), instead analyzing the strategy and procurement driving changes in the force. The Russian Navy is coalescing around four principal missions: defense of Russia’s maritime approaches and littorals, long-range precision strike with conventional and nuclear weapons, power projection via the submarine force, and defense of the sea-based nuclear deterrent carried aboard Russian SSBNs.

Alongside these missions is the traditional requirement for naval diplomacy for which Russia will always keep a few capital ships, even if they are as unlucky and unreliable as the Admiral Kuznetsov carrier. Upholding Russia’s status in international politics is one of the Russian Navy’s most important roles. Status projection might rank on par with power projection. Indeed, during the hard times of the 1990s and 2000s, the Russian Navy did little other than flag waving trips and ports of call. Naval diplomacy, particularly in the Asia-Pacific region, remains one of its chief tasks.

The Russian vision is to build a navy that can successfully keep the United States at arm’s length and integrate with layers of defenses, long-range anti-ship missiles, ground based aviation, submarines, coastal cruise-missile batteries and mines. In this manner Russia wishes to deny the United States access from the sea and make forced entry operations costly. Next, the Russian Navy is increasingly positioned to conduct long-range attacks with conventional weapons against fixed infrastructure targets, and plays an important role in nuclear escalation if called upon. The latest doctrine explicitly states the navy’s role in both long-range conventional fires and nonstrategic nuclear-weapons delivery as a means of deterring adversaries and shaping their decisionmaking in a crisis. While the numbers of current cruise-missile shooters may be relatively small, the next state armament program, GPV 2018–2025, intends to spend more on the missile count.

Russia’s demands for power projection are quite low. Its armed forces don’t play away games, and are geared towards fighting just across the street. That’s where Russia’s core interests and priorities lie. As such, long-range aviation can handle missile strikes at considerable distances from the country’s borders. The submarine force, however, simply has to help defend SSBN bastions and present a credible threat to the United States. This is of course easier said than done, but Russia is probably by far the most technologically sophisticated adversary the United States faces in the undersea domain. Incidentally it also has the world’s second largest nuclear-powered submarine force.

How the Russians Plan to Get There

Russia began with a corvette and frigate construction program—in part because it’s what the shipyards could reliably build—in the hopes of moving on to larger ship classes later. This was a logical approach to reviving the shipbuilding industry, the worst of Russia’s defense-industrial enterprises.

That said, there’s much more to these ships than meets the eye. One thing the Russians have learned is that one does not need a lot of tonnage to pack a potent missile system. The surface combatant force is not being organized around platforms, but around an integrated family of capabilities. These include vertical launching system (VLS) cells with Oniks (SS-N-26), Kalibr (SS-N-27A/30), Pantsir-M for point defenses, Redut VLS cells for air defense, and Paket-NK anti-torpedo systems. Larger ships will carry Poliment-Redut air defense, phased array radar and be more versatile in the roles they can perform. A Russian corvette comes with a seventy-six-millimeter gun or a one-hundred-millimeter gun, close-in weapon systems (CIWS) and typically eight VLS cells. These ships tend to be low endurance, but the firepower-to-price ratio is a bargain, and they can comfortably do their job while just outside port.

Russian frigates, both the Admiral Grigorovich-class (four thousand tons) and the new Admiral Gorshkov-class (5,400 tons) ran into trouble because they depended on Ukrainian gas turbines. Cut off in 2014, Russia was set back five to seven years with engines for just three Grigorovich frigates and two Gorshkovs. Since then, Russia’s defense industry has already restored the ability to repair gas turbines and built the testing facility to develop its own design. The delay cost Russia’s shipbuilding program about five years, but it spurred a crash effort to produce an indigenous gas turbine, which seems to be making rather good progress.

Similar problems encountered with the cutoff of German MTU diesel engines, used in some of the new corvettes, were worked around with domestic analogues or Chinese variants. Russia’s shipbuilding program is through the worst of the delays caused by sanctions and the breakdown of defense cooperation with Ukraine. The shipbuilding industry as a whole has been going through a difficult recovery period, having taken a twenty-five-year hiatus, but it would be wrong to assess this unpleasant past as inherently representative of the future. For example, Russia has been building a large new shipyard in the east, called Zvezda, with the assistance of the Chinese. Intended for commercial production, this shipyard just installed a 1,200-ton crane, which is a necessity for modular construction and no small leap for Russian shipbuilding.

Older Ships Can Kill Too

Currently held views on Russia’s naval capabilities are decidedly dated. In reality, Russia’s Navy has probably not seen operational tempo and readiness levels like this since the mid 1990s. Russian ships, including notoriously unreliable ones like the Sovremenny-class destroyer, are conducting increasingly longer voyages, while the force as a whole is spending much more time at sea than in the two preceding decades. A large part of the fleet is still Soviet inheritance, requiring tug boats to escort small groups, but this supposedly rusting navy is maintaining presence while the submarine force is also no less active. Nowhere is that more visible than in the resurrection of the Black Sea Fleet after the annexation of Crimea and the constant rotation of ships through the Eastern Mediterranean. The oft-unacknowledged truth is that the Russian Navy is a lot more operational now than it has been in many years.

The surface combatant force remains an eclectic mix of legacy Soviet platforms serving alongside new frigates and corvettes. Over 30 percent of the Soviet-era ships are receiving major modernization programs, but a good deal will be phased out in the 2020s. Russia will likely keep the Kirov-class and Slava-class cruisers for quite longer, as flagships and status bearers, especially when Admiral Nakhimov completes its expensive modernization. Beyond that, much of the inherited Soviet force is expendable, especially the ancient tank landing ship (LST) fleet, which is hardly required for expeditionary operations and needs little to no modernization. Russia supplied the bulk of the tonnage for its operations in Syria with four used Turkish cargo ships that it probably bought at a pittance—so much for the Russian Navy being unable to sustain expeditionary operations without dedicated capacity. Necessity is not always the mother of procurement, sometimes organizations innovate.