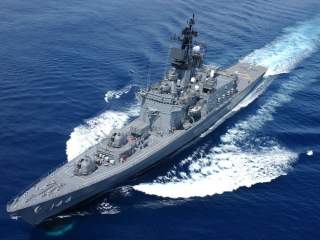 Twenty-five years after the end of the Cold War, the Japan Maritime Self-Defense Force (JMSDF) remains a Cold War navy. As U.S. Naval War College professor James Holmes has argued, the JMSDF has been designed to fill specific niches in partnership with the United States in combating the threats that would have emanated from the Soviet Union; thus, we have seen particularly proficient capabilities like antisubmarine warfare and minesweeping. Is now the time for the JMSDF to change its mind about its goals, fulfilling a new security role in the region and in the world as partners of the United States as spelled out under the Japanese policy of a “Proactive Contribution to Peace”?

In the changed conditions of the twenty-first century, the most realistic security approach for the JMSDF will involve more so-called “Non-Combat Military Operation” (NCMO) missions, like Humanitarian Assistance/Disaster Relief and anti-piracy operations in the Asia Pacific region in conjunction with the U.S. Navy.

We are already seeing movement on this front. The guidelines for U.S.-Japan defense cooperation were revised in April 2015. Bilateral security cooperation is likely to strengthen in the new future. The U.S.-Japan alliance has already been a key element of the regional security architecture in the Asia-Pacific region. The future will likely contain a more balanced and robust role for Japan, as well as enhanced security cooperation between Tokyo and other U.S. partners in the region, such as the Philippines and Australia.

The U.S. Navy and the JMSDF find themselves on the front lines in the Asia-Pacific region as maritime security challenges increase. China has made dramatic increases in military spending, and is building up its own anti-access/area denial capabilities to deny the U.S. entry in its near seas. It poses a threat to neighboring countries in the East China Sea (ECS) and the South China Sea (SCS). The SCS serves as a major choke point for Chinese naval power projection toward the Indo-Pacific region. As China’s strategic position in these waters has improved, Beijing has been able to act much more assertively throughout the region.

This has raised a fundamental question as to whether China will use its growing military and economic power to assert its own national interests without respect to international norms. The South China Sea issue—China’s creation of artificial islands and extending its claims for its maritime zones—represents a typical challenge to “freedom of navigation” based on international rules.

China, of course, maintains that its intentions are peaceful and constructive. Beijing defines the SCS as “a sea of peace, friendship, and cooperation.” Premier Li Keqiang issued a five-pronged proposal to uphold and promote peace and stability in the SCS at the Eighteenth ASEAN-China Summit in Malaysia in November 2015. What is interesting is that it explicitly states that countries from outside the region (e.g., the United States) should undertake to respect and support the efforts by countries in the region to uphold peace and stability in the SCS (that is, the arrangements that China reaches with its neighbors).

At this summit, the United States and Japan raised concerns about the SCS, about how key shipping routes would be safeguarded and how the significant oil and gas deposits under its waters might be apportioned. In particular, they brought up the possible threat to freedom of navigation posed by Chinese activities. The countries in the region do not want an aggressive and powerful China pursuing its own interests. They must react assertively to what the Chinese are doing, which means being prepared to vigorously uphold the existing rules about maritime operations, including the rights of vessels to engage in navigating open waters.

Some critics say that the United States and Japan ought not to intervene in this regional issue, as putative “outsiders” to the SCS. However, the United States has been a Pacific power promoting regional peace and stability for decades, and the U.S.-Japan relationship has been a pillar of stability throughout the entire region. Increasingly, the JMSDF should be prepared to play a greater role with U.S. allies in the Asia-Pacific region. Japan should look for creative solutions to the challenges we face in the SCS and the JMSDF ought to consider what burdens it can be prepared to assume. We need to take seriously statements made by U.S. leaders, including President Obama, that the United States cannot function as the world’s policeman.

The New Importance of Maritime Power

The words and deeds of President Xi Jinping are so conspicuous. Xi proposed that China should take the initiative in its neighboring states. PLA has been striving to modernize, preparing for local wars under conditions of informationization.

As China rises and becomes increasingly powerful, it will want to dominate the Asia Pacific region. Xi’s vision of “One Belt, One Road” lays out a strategy for China, as a continental power, to consolidate a sphere of influence in the Asia-Pacific area, allowing Beijing to take the initiative in defining regional policy. The United States and Japan must address the direct challenges that China poses to regional security.

Japan has strengthened its ties with ASEAN nations along with the United States; the rise of Chinese continental power has led to a counterbalancing coalition of Asia-Pacific maritime powers. Japan should make a radical change from strictly limited self-defense to protecting its own islands and territorial waters, in order to fulfill a new security role in assisting other countries in the region.

Japan has already taken steps toward this transformation. The JMSDF, for instance, has undertaken an antipiracy mission in waters off Somalia since March 2009. An operation in far-off waters represents a shift in thinking about the JMSDF’s essential mission, from local self-defense to becoming a navy that understands the critical importance of full participation, along with the United States and other alliance and coalition partners, in securing the world’s sea lanes (since the Gulf of Aden connects Europe and Asia via the Suez Canal and is one of the world’s premier shipping routes).

The South China Sea, in turn, connects the Indian and Pacific Oceans. Guaranteeing freedom of navigation in these waters is vital to the global economy. The United States, with its global commitments, cannot secure freedom of navigation on its own, but the ASEAN states also cannot fully assume this burden. Japan must step in to assist.

Any greater naval involvement by Japan in this area, however, runs up against history. Japan's past militarism inflicted suffering on the ASEAN countries. However, Japan has recovered trust through its pursuit of a pacifist path for the past seventy years after the Pacific War. The Japan of 2016 is completely different from the prewar era. Japan should make this difference clear to counter its persistent negative image in the international community, by stressing its proactive security contributions to the U.S.-Japan alliance. In particular, a new relationship between Japan and the Philippines is crucial. Allowing Japanese assets to operate from Philippine bases alongside U.S. units and platforms would help to enhance efforts to uphold the peace and stability of the SCS, augmenting and amplifying existing U.S. capabilities and strengthening the Philippines’ monitoring abilities.

Five benefits of NCMO in the South China Sea

So, what could the JMSDF bring to the table? It is positioned to be able to focus on Non-Combat Maritime Operations like Intelligence, Surveillance and Reconnaissance, which will be a key peacetime operational role in the South China Sea, to support the Philippines and other ASEAN members. The JMSDF is a versatile force that can tailor NCMO missions alongside the U.S. Navy-Marine Corps Team, building on decades of training and a high degree of interoperability between the two countries’ maritime forces. There are five significant benefits for Japan to conduct NCMO missions in the SCS.

First, Japan could fulfill a new security role as a key U.S. ally under its “Proactive Contribution to Peace” policy. This would be beneficial for enhancing the U.S.-Japan alliance.

Second, Japan could show its proactive security attitude in the Asia-Pacific region by conducting peaceful security measures like NCMO missions.

Third, it would benefit the international community through peacefully maintaining peace and stability in the region, not coercively changing the status quo.

Fourth, it could be beneficial to China as well. China and Japan have a precious opportunity to maintain peace and stability in the region through defense cooperation—with Japan playing a more proactive role in regional peace and security, along with the United States.

Fifth and finally, there would be obvious benefits to Japan. The JMSDF could demonstrate the new security model of its modernized naval capabilities, which focus on executing NCMO missions with limited resources.

Over the past several years, many have raised concerns about Japan’s evolution from a strict postwar focus on local defense. This provides an opportunity to shift to a more proactive and regionally responsible role for the JMSDF, adding the full range of Japanese capabilities to the grand coalition of the United States and its other Asia-Pacific allies and partners. A renewed Japanese role would guarantee peace and stability in the region that, in the twenty-first century, is poised to emerge as the heart of the global economy.