Why the Trump Tax Cut Is Necessary 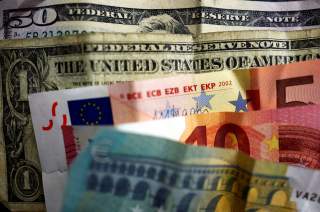 The battle underway in Washington to enact pro-growth tax reform is itself a perfect storm. Four questions will be answered. Competing visions of the world will clash and America may change its economic future and define its national policy for years to come. Or not. The stakes are high. And this political battle has a deadline.

It should be easy to cut taxes with a Republican House, a Republican Senate and Donald Trump elected both as a Republican and as the candidate of pro-growth tax cuts. George W. Bush had a Senate majority (fifty-one) slimmer than Mitch McConnell’s fifty-two, and a House majority of 229 compared to Paul Ryan’s 240. The 2001 tax cut was signed into law on June 7, 2001. Reagan had fifty-three Republican Senators and a fiercely partisan 244-Democrat majority in the House. Reagan’s across the board 25 percent tax rate reduction was signed at the Western White House on August 13, 1981.

It is now late September and the optimists predict a tax bill will be signed by Trump in late November, early December.

Why the delay in unveiling and passing a tax cut? Trump’s tax cut plan was as clearly stated and as often repeated in 2016 as George Bush was in 2000 and Reagan was in 1980. It was a central part of the campaign. Trump called for reducing the corporate income tax from 35 percent—the fourth highest business tax rate in the world (United Arab Emirates, Comoros and Puerto Rico have higher rates.) Trump’s recommended business income tax rate of 15 percent was below the 25 percent House Republicans had earlier supported and Paul Ryan rewrote his plan to move to a 20 percent rate to be closer to Trump’s number.

American firms today pay, on average, 19 percent higher business tax rates than our competitors overseas. China’s business tax is 25 percent, Irelands is 12.5 percent. This is the U.S. government handicapping American businesses and kneecapping American workers. Worse, the United States has a worldwide tax system—unlike almost all the rest of the world. The federal government taxes American businesses and citizens not just on the income they earn here in the United States, but also on any earnings overseas. The French government taxes French people and French companies earnings in France. But if a French firm or citizen earned money in Baltimore, then the firm or individual would pay U.S. taxes and then be free to repatriate all earnings without further interference by France. This means that an American firm that does business internationally is worth more when purchased by a Canadian firm. When Burger King was bought by Canadian firm Restaurant Brands International, it had the same number of employees, the same product, the same intellectual property—but lower taxes because earnings around the world are taxed one time in the country in which they are earned. Not once overseas and again by America.

The Republican and Trump plans all move to a territorial system. There would be a one-time hit on money now overseas—some suggest 3 percent on fixed assets and 8 percent on cash—that all future repatriations experience.

Trump joined House and Senate Republicans in demanding the abolition of the Death Tax—originally enacted to pay for the Civil War. Trump also railed against the Alternative Minimum Tax (AMT), which was put in the tax code in 1969 to ensnare some 115 high-net-worth American who escaped federal income taxes by investing in tax free municipal bonds. Abolition of both the Death Tax and AMT have been advocated by Republicans for years.

Trump and the House Republicans endorsed the idea of moving to full and immediate expensing of business investment in plant and equipment, which will replace long depreciation schedules. This dramatically reduces the cost of new investments, leading to a substantial increase in GDP, wages and employment.

Trump’s personal income tax rate reductions were largely borrowed from Paul Ryan’s plan to reduce the number of tax rates from seven to three. The top rate would fall from 39.5 percent to 35 percent. The bottom rate from 10 percent to effectively 0 percent due to a larger Standard Deduction. And the Standard Deduction for an individual would be increased from $6,000 to $12,000, and for a married couple from $12,000 to $24,000. That means that 95 percent of Americans would no longer have to itemize deductions. A significant simplification.

So what is the delay?

There are two ways to pass a tax cut. One can garner a simple majority of the House and sixty or more votes in the Senate and cut any taxes by any amount one wishes permanently. But Republicans have only 52 senators. They would need at least eight Democrat votes in the U.S. Senate to pass a large permanent tax cut. And on August 1, 2017, forty-five of the forty-eight senators wrote a letter to the present offering to help pass tax reform as long as the reform, one, was not a net tax cut, two, did not cut taxes for all Americans—they wanted to discriminate against high-income earners, and three, the legislation was not enacted through budget reconciliation.

The idea that there are eight Senate Democrats willing to vote to reduce taxes is a fantasy. The issue that most divides the modern Republican and Democrat parties is the tax issue. Yes, John F. Kennedy pushed a 22 percent across-the-board tax cut in the 1960s. But by 1980, most Democrats in the House voted against a 25 percent across-the-board tax cut.

Hillary Clinton ran for president in 2016 as the more moderate Democrat candidate for president, and she promised one trillion in higher taxes over the next decade and did not propose a single tax rate reduction for any American business or citizen. No Democrat has endorsed the GOP tax reforms this year.

Thus, the only path to tax reduction is to use the reconciliation process, which allows a single majority in the Senate to pass a budget that includes tax cuts. The rules for reconciliation process is that the tax cuts can be of any size inside the “budget window”—arbitrarily set at ten years. It could be any number larger than five. Outside the budget window, in years eleven to fifty following passage, the only tax reduction that would be “permanent” would have to be offset dollar for dollar by reduction in entitlements (hence permanent cuts), tax increases, or increased revenue projections due to pro-growth policies in the bill scored by the Joint Committee on Taxation.

Since there are limits to how much growth the Joint Committee on Taxation will attribute to tax reform there are limits to how much tax cuts can be made permanent. In the past the Congressional Budget Office has pointed out that if the U.S. economy grew at four percent a year, instead of two percent a year for one full decade the federal tax revenue would be increased by $6 trillion over those ten years. Growth is a powerful generator of more tax revenue. In the past, the Joint Committee on Taxation did not consider the dynamic effects of tax changes. But that has proved embarrassing. The 1993 Bush tax cut in the tax rate on dividends and capital gains generated more revenue between 1993 and 1997 to Washington than was predicted without the tax cuts—i.e. that tax cut actually paid for itself.

So the size of the permanent tax cuts is limited to how much revenue can be raised by eliminating tax credits and deductions—for instance, eliminating the tax deductibility of state and local taxes would raise $1.7 trillion over a decade—and what growth in revenue might be projected by the Joint Committee on Taxation from lower rates and expensing. There is a third way to increase the amount of permanent tax cuts beyond the ten-year window and that is for congress to use “present policy” rather than “present law” in projecting future revenue. Assuming all tax credits that are planned to expire will continue frees us more space for permanent tax cuts that if one employed “present law” and assumed they would indeed lapse.

So, can the House leadership convince the “Freedom Caucus” to avoid the train wreck of Obamacare repeal and this time avoid making the perfect the enemy of the good. Can they vote for a “less than perfect” tax bill? Can anyone convince John McCain to set aside personal pique and vote for a Trump-endorsed tax bill? One remembers that McCain voted against both the successful Bush tax cuts. Can Trump avoid the siren call of the media to engage in endless and fruitless negotiations with Democrats to water down a bill they will not vote for under any circumstances? Will the Joint Committee on Taxation provide a reasonable dynamic score that allows more of the tax reductions to be permanent?