Why the Washington DC Metro System Is a Complete Disaster 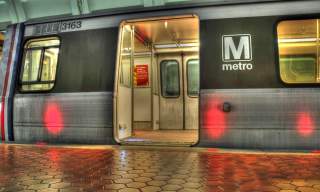 The capital of the world’s only superpower has a third world problem: You can’t get there from here using public transportation.

The forty-year-old Metro mass-transit system, designed to be a model for the rest of the world, is falling apart. And though there’s widespread agreement that the system needs a drastic overhaul, deep political divisions impede efforts to find a solution. So the failures mount.

Complaining about Metro has become a favorite pastime uniting Washingtonians of all political allegiances. And it certainly appears that the system is in a death spiral: Service and safety issues have caused ridership to decline when it had been projected to increase. In response, the transit system’s governing agency, the Washington Metropolitan Transit Authority, is cutting service times and raising fares—an action likely to send more commuters back to their cars.

“For several years now, WMATA has been a system in crisis—all lights blinking red,” Rep. Gerry Connolly, D-Va., said at a March 29 hearing.

The lack of a strict safety culture has resulted in derailments, falsified track inspection reports, fires, major track defects and has actually claimed lives. Reliability concerns and a crisis in customer confidence are depressing ridership…by a magnitude that is driving down national transit ridership numbers now.

Money is a major factor driving the death spiral, and it’s at the heart of the intense political debate over how to reverse it.

Metro’s revenues from fares, parking and other business cover only about 45 percent of its $1.838 billion operating costs in the fiscal 2018 budget. An annual allocation from governments in the area it serves would cover the shortfall.

General Manager Paul Wiedefeld, who took over in November 2015, says Metro needs $15.5 billion in new funding over the next ten years to “remain safe and reliable” amid growth in operating costs that system leaders say is unsustainable.

“What I’ve heard from all stakeholders, the business community, elected officials, riders, is that we have to start to address these issues. We cannot continue this path,” Wiedefeld told WAMU on April 20.

Meanwhile, he and board Chairman Jack Evans, a Democratic member of the DC City Council, are pushing for a dedicated funding source to bring stability to the system. Proposals have included a region-wide Metro sales tax.

But that’s not the whole story. Though there’s general agreement that fixing Metro requires more money, many of the region’s voters and politicians don’t trust the current version of WMATA to spend it well. They have good reason to be skeptical: Much of the system’s predicament is the result of mismanagement, poor accountability and overspending.

Metro’s labor costs—including salaries and benefits—took up 79.7 percent of the operating budget, much higher than the average of 66.1 percent, and have been rising at a rate much faster than revenues. Average total compensation for the more than 13,000 WMATA employees is $123,617.

Meanwhile, questions have arisen over whether riders and taxpayers are getting their money’s worth out of those expenses as the system’s safety woes persist.

A 2012 investigation of Metro by The Washington Times found a link between safety violations and a “culture of complacency” among transit system employees.

This connection was starkly illustrated on April 19, when a federal court ordered WMATA to rehire a senior mechanic who falsified maintenance logs on ventilation fans, at least one of which failed at a key time on Jan. 12, 2015, when an electrical malfunction caused a train to fill with smoke, killing one passenger and injuring others. U.S. District Judge James E. Boasberg ruled that he had “little choice” but to order Seyoum Haile reinstated as an arbitrator had decided because the decision “meets the low bar required for confirmation.”

The 2015 incident at L’Enfant Plaza was just one of many warnings that the system was literally coming off the rails. It resulted in the Federal Transit Administration taking direct control of Metrorail safety and the three-year SafeTrack program to rehabilitate the system after a scathing report detailing “systemic safety deficiencies.”

“The system was failing. And people who used the system felt that, and something had to be done,” former Transportation Secretary Anthony Foxx told WAMU in an exit interview in January. “We took the most dramatic steps we could take to ensure that Metro was starting to put its focus on the right issues, which is and should always be safety.”

Though Wiedefeld and WMATA board members say the system is back on track, few believe it, as the bad news keeps coming. A Government Accountability Office report from March 14 faulted the agency’s management practices for the SafeTrack project, and a recent report prepared for the board’s Safety Committee found that the number of fires caused by faulty insulators had increased in the first three months of this year.

Lawmakers in Congress, responding to public pressure, are calling for a drastic overhaul of the system while making clear that any new funding depends on WMATA’s compliance with the changes. Proposed legislation from Rep. John Delaney, D-Md., would give Metro up to $75 million extra a year in federal funds over ten years for infrastructure improvements and maintenance. In return, the legislation would demand that the size of the WMATA board shrink to nine members by eliminating those appointed by local governments and that existing union contracts be modified to “to provide a high level of service, reliability, and safety as well as lower costs by selectively using competitive bidding for certain capital improvement projects.”

Local 689 of the Amalgamated Transit Union, Metro’s largest union, denounced the bill as “heartless” and said it was “among the most outrageous proposals ever put forth by a Democratic member of Congress in recent memory.”

But Republicans in Congress are likely to go even farther—beyond what their Democratic colleagues and Democratic-controlled local governments may accept, much less the union. Rep. Barbara Comstock, R-Va., is preparing a bill that also would eliminate binding arbitration of disputes, which she and others see as a driver of both high labor costs and the lack of accountability.

Comstock, who represents communities into which Metro’s new Silver Line is expanding, is the only Republican member of Congress in the transit system’s service area. ATU Local 689 invested heavily in trying to defeat her in 2016, but she was re-elected. And with the backing of fellow Republicans who control both chambers of Congress and the White House, future federal funding for Metro may depend on whether the agency is willing to accept the changes.

“We need to blow up the compact and change it quite considerably,” Comstock said at a December 2 hearing, referring to the congressionally approved agreement establishing WMATA. “We need to get rid of the binding arbitration which is not allowing Mr. Wiedefeld currently to make the changes he needs and put people on task in a way to get the job done.”

Charles Hoskinson has worked as a reporter and editor in Washington for more than fifteen years. His stories have appeared in Congressional Quarterly, Politico, AFP and the Washington Examiner.