Why Is Tom Cotton Hurling the Charge of Anti-Semitism At the Quincy Institute? 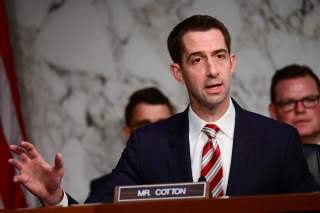 The Quincy Institute for Responsible Statecraft is experiencing its first public dust-up.

On Wednesday, in remarks on the floor of the U.S. Senate, Tom Cotton (R-AR) accused the Quincy Institute of enabling antisemitism. The institute was founded one month ago.

“It [antisemitism] festers in Washington think tanks like the Quincy Institute, an isolationist blame America First money pit for so-called ‘scholars’ who’ve written that American foreign policy could be fixed if only it were rid of the malign influence of Jewish money.”

Cotton, a former U.S. Army Captain who served in Iraq and Afghanistan, was personally groomed by arch-neoconservative and “NeverTrumper” Bill Kristol prior to his ascension to the U.S. Senate in 2014. Since his election, he has consistently been one of the most hawkish members of the Senate.

Quincy’s mission statement is to promote “ideas that move U.S. foreign policy away from endless war and toward vigorous diplomacy in the pursuit of international peace.” To that end, it has been critical of the Trump administration’s decision to assassinate Iranian Maj. Gen. Qassim Suleimani in an apparent act of war.

Andrew Bacevich, a former U.S. Army Colonel who served in Vietnam and the Gulf War, is the founding president of the Quincy Institute. Yesterday, following an event promoting his book, The Age of Illusions: How America Squandered Its Cold War Victory, he spoke to the National Interest about Cotton’s accusations and Suleimani’s death.

Unable to hold his laughter upon hearing Cotton’s remarks, Bacevich responded, “Well it’s absurd. Nobody in the Quincy Institute has ever made any statement remotely like that. It’s just absurd. It doesn’t deserve a response, really. The guy is a fool, obviously.”

“I don’t care about what he said,” Bacevich continued. “But I think we are encouraged that the Quincy Institute is getting as much attention as it has. And its attention from serious people who wish to see a significant change in U.S. foreign policy, moving away from this promiscuous use of force to a more restrained posture. That’s what we’re trying to do, and I think we’re off to a good start. I also think we have a hell of a long way to go before we bring about the kind of change, we aspire to bring about.”

Bacevich has been a Trump critic since the 2016 election, and never doubted that the former real estate mogul was too amateurish to carry out his message of restraint. Suleimani’s assassination fits that narrative. “It was a reckless act undertaken by the president with apparently no thought given to what’s going to happen next. [It] contradicts his oft-repeated statement that he intends to bring an end to our endless wars. He backed himself into a corner,” he said. “It appears that he and the Iranian leadership have found a way to back away from this crisis—to which they both contributed—but to which I think the president’s recklessness contributed to a greater extent than anything the Iranians were doing.”

The administration has waved away questions about its claim that Suleimani represented an “imminent threat” who was about to execute an attack that could lead to possibly hundreds of American casualties in the Middle East. “Jesus, do we have to explain why we do these things,” an exasperated senior State Department official said in a press briefing when asked about the veracity of the threat.

Bacevich sees it differently. “We have no idea if any such intelligence existed,” insisted Bacevich on why it’s important to ask these kinds of questions. “We shouldn’t trust any administration, especially on matters related to the use of force. Any administration needs to provide a persuasive case for why it’s necessary to kill somebody or bomb some target.”

Some of the president’s defenders insist that Trump’s game of chicken with Iran to see who blinks first is actually a rejection of neoconservatism. Instead of democracy promotion, they insist, this is rational deterrence in the Jacksonian tradition. President Andrew Jackson (1829–1837) came close to war with both France and Mexico on different occasions but fought neither. Bacevich, who still holds the title of Professor Emeritus of International Relations and History at Boston University, believes this is a distinction without a difference. “I think some of these are artificially constructed categories that shouldn’t be taken seriously, and this whole notion of a Jacksonian tradition versus a Hamiltonian tradition, I’ve always thought that was actually kind of bogus.”

Tom Cotton will run unopposed for reelection this year.