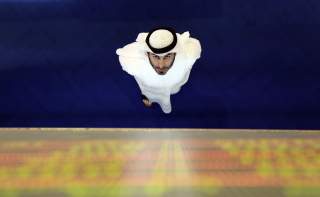 Geopolitical spats taking place in Syria, tensions over China’s militarization of the South China Sea, nuclear threats from North Korea, and daily tweets from President Trump have caused market turbulence in 2018. Yet the ten-year United States Treasury yield reached 3 percent for the first time in ten years, which is a sign of investor confidence and stable economic growth. The IMF also reiterated strong market fundamentals and U.S. jobless claims are at their lowest level in forty-eight years. Then why are markets considered so volatile at this time? The reason seems to be geopolitical-news-headlines-of-the-day trumping market sanity and strong macroeconomic fundamentals.

But it’s worse for investors within this latest round of geopolitical bluster when, “export-facing currencies, trade-sensitive emerging markets and government bonds have barely moved.” Yes, the CBOE volatility index (Wall Street’s fear gauge), measuring expected precariousness of the S&P 500 based on option prices has recently climbed 12 percent, but currencies are unmoved. The Deutsche Bank Currency Volatility Index is near its lowest level in three month; two points below its five-year average, and the Merrill Lynch Bond Volatility Index has declined, “since tariffs were signed.”

James Athey, senior investment manager at Aberdeen Standard Investments pointedly states, “This is headline risk and volatility-driven removal of positions rather than rational increase in the probability of trade wars.” Equity markets aren’t looking at stable income statements and balance sheets or even the basics of economic supply demand, instead short-term equity markets participants are allowing themselves to be slaves to news-driven investment strategies.

Goldman Sachs joined this bandwagon when they stoked fears about global markets by saying, “The Only Two Times We’ve Seen A Market Like This Was The Cuban Missile Crisis And The 1987 Crash,” on their way to record earnings. Even JP Morgan has been perplexed by this disconnect taking place between “volatility in asset classes,” when they stated in a strategic research note in early April:

“Most of what is passing for explanations are little more than post-facto rationalizations of price action. Our sense is that market participants are as perplexed about comatose [FX volatility] as we are.”

Here’s a sampling of recent overheated news headlines that haven’t made a dent in healthy markets or companies but give the impression we are heading towards World War III or the next Great Depression. Russia and Iran warn of “global chaos,” after the United States led strikes on Syria. Putin predicts chaos if more strikes occur in Syria. Saudi Arabia would send and assist leading an Arab coalition against Iran in Syria stoking further regional tensions.

China though seems to particularly rattle markets with the threat of a trade war that never materialized with the United States. While China is a geopolitical case study reminiscent of Japan in the 1930s, the danger China currently poses via “China's New Revolution” is excessive, according to historian Dr. Victor Davis Hanson. While President Xi is similar to Mao by having absolute control over China’s government and Communist Party, the Pentagon and its allies have plans to confront the Chinese army and Xi over their aggressive behavior in Southeast Asia.

Moreover, one crucial part of China’s force projection through their outdated aircraft carrier, Liaoning, isn’t as lethal as made out to be by China, other governments and world press organizations. China’s own state television admitted, “it requires a little bit of luck plus a strong body and mind to land a plane safely on its deck.” And it appears Xi, “blinked first” in its trade battle with the United States and Trump, according to the Business Insider. The geopolitical tensions China causes markets globally appear to be rhetoric surpassing prudent financial and investment principles.

Crude prices are where the greatest price swings over geopolitical volatility take place, more so than stocks or bonds. OPEC’s history has shown Saudi Arabia playing the role of, “swing producer, by regulating its output to keep the market in balance.” OPEC, particularly Saudi Arabia, has also gone to war with U.S. shale over the 2015 Iran nuclear deal and imposed a costly oil embargo over President Nixon’s decision during the 1973 Yom Kippur war to establish emergency supply lines that included oil, gas and arms shipments.

Geopolitical events, such as the decertification of the Iran deal by President Trump, aren’t really driving oil’s bullish sentiments; instead, oil markets are tightening. But U.S. oil output is expected, “to hit 10.7 million bpd this year, rivaling top producers Russia and Saudi Arabia.” Just one region of west Texas has seen an 800,000 bpd surge in one year, “pushing the region’s crude to almost a $13 a barrel below international benchmark Brent crude, the biggest discount in three years.” This signals U.S. exports to Europe will increase and they have. The United States is now setting all-time records of exports to Europe in April of 550,00 bpd; likely negating any negative geopolitical tensions arising from pulling out of the Iran deal.

There is, however, a bullish and bearish case for oil from an April 12 note from Barclays stating:

“Oil prices could rise due to the perfect storm of stagnant supply, geopolitical risk and a harsh winter. On the flip side (bearish) explosive growth of U.S. shale keeps the market well supplied, and ultimately forces a downward price correction in the second half of the year.”

The bull side reveals that oil is in high demand—especially in Asia—with Reuters estimating that China will import over 9 million bpd in April. China’s overall demand is expected to jump 370,000 bpd in 2018. Other concrete reasons for oil to rise is the latest Oil Market Report from the International Energy Agency (IEA). The report revealed OPEC production cuts are working since supply is expected to be less than demand for 2018, causing additional inventory depletion.

Recently, Brent closed in the $70 dollar range for the first time in over three years. These prices are roughly 50 percent higher than they were last August. Bullish news was also buoyed by the weekly report from the Energy Information Administration (EIA) showing a 1.1 million barrel drop in U.S. crude oil inventories, gasoline and diesel also dropped by 3.0 million barrels bringing total commercial inventory draws to 10.6 million barrels in late April. A very large and bullish draw on inventories that caused Bloomberg to report Saudi Arabia’s new Brent target price of $80/bbl. Reuters, however, reported the price target could be as high as $100/bbl. These are fundamental reasons for oil prices to be high instead of the “geopolitical risk premium.”

On the bear side, that could see price decline. In fact, the EIA said in its monthly Drilling Productivity Report, “that U.S. shale production is expected to increase 125,000 bpd in May over April.” Furthermore, there is more than enough supply to withstand OPEC production cuts and geopolitical events in the Middle East, Venezuela or the South China Sea. There are billions of barrels of oil off both American coasts. New finds in South America that includes offshore and shale plays. Canadian prime minister Trudeau backs controversial—though plentiful—Canadian oil sands. And the new estimated 80 billion barrel find in Bahrain means the world is awash in oil and prices could crater instead of worries over the geopolitical risk premium raising prices.

Now, of course, there are geopolitical risks that some are seeing as a return to the Cold War that could disrupt markets. But our world is a byproduct of the Bretton Woods agreement, which set up liberal, interconnected global markets. That’s why North Korea will now possibly lay down its nuclear weapons, China doesn't want a trade war, and the United States wants to rejoin the TPP trade pact.

The Chinese, Russians, Iranians and other countries who loathe the West and the U.S.-led post–World War II order may speak aggressively, like the United States, but none of these countries are going to kill global prosperity by starting another World War. Investors should regain wise investment strategies and turn off the nightly news and opinion sections in newspapers, magazines and media websites searching for ad dollars through hyperbolic headlines. Return to supply and demand. Choose clean financial statements over attempting to predict geopolitics. The world is a stressful place, but overall peace and human progress resonate and positive opportunities are abound for investors.