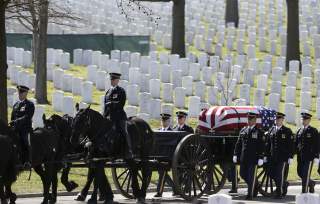 IN JANUARY 1961, Dwight D. Eisenhower addressed the nation for the final time as president in a speech most famous for its warning about the influence of the military-industrial complex. Yet at a deeper level, Eisenhower conveyed a sensibility he thought was disappearing from modern life—and wanted to warn of the consequences. As one of his speechwriters later described it, Ike “was striving to reach tomorrow’s conscience, not today’s headlines.”

Eisenhower said he spoke as “one who has witnessed the horror and lingering sadness of war,” who believed that while he had brought the world closer to peace, America faced dangers of “indefinite duration.” He urged his fellow citizens to remain confident but eschew arrogance, reminding that American leadership depends not simply on the aggregate of its power, but how it is used. He emphasized the importance of time and patience—speaking of the “long lane of history” and the imperative of avoiding “the impulse to live only for today.”

As he entered the twilight of his life of service, Eisenhower sought to leave Americans with a sense of conviction, courage and balance—and this latter word he used repeatedly throughout the address. Americans, he argued, should always remain true to their principles while “confident but humble with power.” After a decade of peace and prosperity, he was proud of the success the United States had achieved. Yet he counseled that “we should take nothing for granted.”

Looking out at a world that seemed to be getting only more complex, Eisenhower projected an outlook to try to help Americans navigate between the impulses of hubris, complacency and resignation. This perspective reflected his unique experience, the kind he worried would be lost to the next generation. As David Brooks has observed,

Or to put it another way, Eisenhower’s final words as president reflected the perspective of a leader who understood the lessons of tragedy.

TRAGEDY IS an ancient concept in global politics. But too often it is misunderstood or misused. Tragedy is not the same thing as pessimism. To understand tragedy is not to believe that everything is destined to fail and therefore nothing is worth trying. Yet neither is tragedy something that can be transcended. So it is equally dangerous to think the world’s dangers can ever be completely overcome.

As portrayed most vividly in the works of Euripides, Sophocles and Aeschylus, tragedy can be both educational and inspiring. Familiarity with tragedy, Aristotle argued, required a comprehension of “not the thing that has happened, but a kind of thing that might happen.” To the Athenians, these plays taught about past mistakes and missed opportunities. The lessons of the ancients loomed large before not only European statesmen, but also American ones. As Eisenhower’s most crucial mentor, George C. Marshall, observed in the late 1940s, “I doubt seriously whether a man can think with full wisdom and with deep convictions regarding certain of the basic international issues today who has not at least reviewed in his mind the period of the Peloponnesian War and the fall of Athens.”

Enter Hal Brands and Charles Edel. In their insightful new book, these diplomatic historians note at the outset that remaining mindful of the past was not tantamount to “counsels of resignation or fatalism. They were calls to wisdom and action.” In their display of suffering and loss, Greek tragedies aimed to “provoke awareness and constructive action.”

By tracing the idea of tragedy in international politics from the fifth century bc to the present, Brands and Edel offer an original account of the past that is admirably brief, yet still carries a thought-provoking punch (full disclosure: I know both authors professionally, although we have never worked together). They compress 2,500 years of history into less than two hundred pages to show how the recognition of tragedy—and its active recollection—have been essential to the creation of international orders, from the peace of Westphalia to the post-World War II era. At the same time, they detail a fundamental irony: the more distant tragedy seems, the more susceptible one is to repeat the mistakes of the past. Just when you think tragedy becomes impossible, they argue, it becomes more probable. Which brings us to our current crisis.

Brands and Edel worry about the state of America’s role in the world today. Yet rather than just fret, one of the book’s upsides is showing how we got here. Echoing the argument of Robert Kagan in his recent book, The Jungle Grows Back, they describe how U.S. leadership in the early Cold War years built the liberal international order that blended “hegemonic power and ambition with solicitude for the input and interests of others.” This order was not the result of some law of nature or act of the Almighty; it was the product of decisions by leaders schooled in tragedy—and the public’s understanding of it, mainly through direct experience—designed to prevent the horrors of the previous three decades that had brought devastating global conflict. “By cultivating a tragic sensibility,” Brands and Edel observe, “U.S. policymakers were able to achieve results that were precisely the opposite of tragic.”

Of course, despite the relative peace and prosperity of the recent liberal international order, these results hardly eliminated hardship. The past decades have been littered with failures, strife and bloodshed. But that’s exactly the point. Tragedy can only be mitigated, not transcended. The danger, however, is when we believe the latter and forget the former; when we succumb either to the illusions of omnipotence or seek to pretend that policy decisions can be made without sacrifices and trade-offs. Possessing tragic sensibility is to understand that falling prey to such delusions has happened before, and it will happen again. And as Brands and Edel show, it is happening now.

WHAT CAN be done? One of the counterintuitive elements of this book about the worst in humanity is its optimism. If we can understand the past and embrace the tragic sensibility, we can not only avoid the worst, but actually make things better. Despite the dire current global landscape sketched by Brands and Edel—with the return of geopolitical powers like China and Russia, “superspoilers” like North Korea and Iran, virulent threats such as cyberespionage and cyberwarfare, a warming climate and a poisonous political atmosphere at home—they don’t think it is too late.

The imperative is to rediscover tragedy, and by neatly summarizing the tragic mindset as comprising six attributes, this book does a real service to policymakers and citizens alike. For example, Brands and Edel argue that one must never forget that tragedy is always with us, and therefore “what endured in the past is not destined to endure in the future.” At the same time we must reject complacency without falling into fatalism—despite its flaws and challenges, and even considering the rise of new challengers, the United States still has an enviable hand to play. When it comes to geopolitical attributes, America should not want to trade places with any other country.

This does not mean the United States can do things on the cheap or alone, so understanding that one must endure sacrifices and work with others are additional facets of the tragic sensibility. This also means acknowledging that to mitigate tragedy requires relentless energy and unceasing effort. One can never forget that while things may get better, danger never goes away. However, especially for a country as powerful as the United States, the challenge is to maintain a sense of proportion and restraint. Perhaps the hardest part of foreign policy is deciding when and how to act, balancing between doing too much or too little, navigating between hubris and paralyzing modesty. To remember this dilemma is the essence of thinking tragically.

So if we are losing our tragic mojo—and one cannot accept Brands and Edel’s argument, or follow the daily headlines, and conclude we are not—how do we get it back? Can we rediscover tragedy without experiencing it?

The bottom line is that it is really hard, especially today, which is why one finishes this fundamentally optimistic book with a tinge of pessimism.

Reclaiming the tragic sensibility begins, first and foremost, with education—by rejecting what Brands and Edel describe as “creeping historical amnesia and strategic ambivalence.” This goes deeper than the shopworn George Santayana observation that those who forget the past are doomed to repeat it. The genius of the Ancient Greeks was how they worked tragedy into their political culture. Tragedy was not something to be embarrassed by or to be simply used as a cudgel against one’s enemies, but something to be studied and revered.