Why Trump Can Still Win 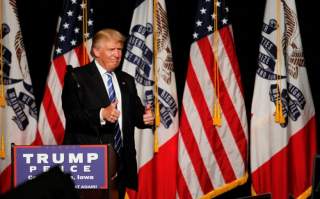 The dust has settled since the conventions and Mrs. Clinton appears to have settled into a lead of three to seven points. This reflects the usual convention surge and a final flare-up of Trumpian foot-in-mouth disorder. It is far from a safe margin ten weeks from a presidential election, and even farther from the elephantine gap the more energetic anti-Trumpians were predicting. (They envisioned something like the sixty-four point margin in the French presidential election of 2002 between Jacques Chirac and Jean-Marie Le Pen.)

The Democratic National Convention was designed to be a shock and awe campaign on behalf of all the forces of continuity of both parties. Both Clintons, both Obamas, Joe Biden, Tim Kaine, as well as Bernie Sanders and Elizabeth Warren, an all-time record for addresses from present, former and intended imminent occupants of the White House and Naval Observatory (where the vice president lives). If Hillary Clinton and Tim Kaine win and are reelected, it will be an astonishing sixty-four years in the official residences for those convention speakers, without adding a future term or two for Kaine or Warren.

It was intended to be a show of strength and unity for the whole concept of continuity of what the country has had for most of the last quarter century. In reinforcement of that theme, Michael Bloomberg was trotted out to perform a billionaire New Yorker-to-billionaire New Yorker hit job on Donald Trump, wedged in among all the past, present and future public tenants.

The question was whether the parade of verbose incumbents stabilized the election campaign and rallied adequate numbers of those satisfied with the Clinton-Obama record and ethos, and added to it a cubit of those capable of being frightened at the prospect of Trump in high places; or whether it reinforced the exasperation, boredom, anger, and numbers of those who want to clean house and sweep the Clinton dynasty into the same dust-bin as the Bush dynasty which inadvertently spawned it. The question remains unanswered, as neither has occurred.

In fact, the Bushes and Clintons have been more incumbencies than dynasties. The Adams had father and son presidents, then a grandson who was a vice presidential candidate and distinguished minister to Great Britain during the Civil War; respected writers descended from him. They were one of America’s most prominent families for 150 years. The Harrisons had an Indian Wars and War of 1812 general who became president, his son was a U.S. senator, and the senator’s son was a president, having been a Civil War general. They were a famous family in the Midwest for almost all of the nineteenth century. The Roosevelts gave the nation two of its greatest presidents, but they were, apart from the fact that Franklin married Theodore’s niece and goddaughter, only sixth cousins, a generation apart in age and in different parties, but they were, between them, very prominent in the public life of the country for nearly fifty years, and one or the other was the leading American public figure for probably half that time. These were meritocratic dynasties, though the Adams and Roosevelts were well launched into their public careers from well-to-do families.

Prescott Bush was an able and respected man who married the daughter of the boss and became the head of a merchant bank, and then a U.S. senator from Connecticut. His son, George H.W., was well-placed in the oil business in Texas through his father’s connections, became congressman in a safe Republican district of Texas, and was rewarded by Richard Nixon and Gerald Ford for two unsuccessful Senate campaigns in Texas with the embassy to the United Nations, chairmanship of the Republican Party, the mission to China and direction of the CIA. He was competent in all these roles and ran behind Reagan in the primaries in 1980, conceding the primary he could win in Reagan’s favor after Reagan had sewn up the nomination; the nominee rewarded his courtesy with the vice-presidential nomination.

The vice president performed capably and stood on the Reagan coat-tails all the way into the White House. He was an above average president but not a good party leader, and allowed the erratic Texas billionaire Ross Perot to split the Republicans, bringing in the Clintons, who might otherwise not have been durably prominent outside Arkansas. Between them, the Bushes and Clintons held the White House for twenty consecutive years. Hillary Clinton defeated Barack Obama in the primaries eight years ago, but Obama sold the ex officio delegates on the timeliness of a nonwhite president; he won and gave Mrs. Clinton the State Department as a consolation prize. Thus, the two families held one of the three greatest offices in the federal government for eight straight terms, from the inauguration of the senior Bush as vice president in 1981 to Mrs. Clinton’s retirement from the State Department in 2013.

There has never been anything remotely like such a two-family condominium in the country’s history, and as all readers know, Hillary Clinton and Jeb Bush have spent the last four years preparing for another crack at the White House. Hillary limped over the first hurdle after a bruising battle with an unfeasible old socialist, and Jeb had an unscheduled rendezvous with the rocket-propelled grenade of the Trump campaign, after pitching a stupefying amount of backers’ money out of the windows.

The points of this recitation are that the country’s candidates for national office have steadily declined in quality (apart from Reagan, who first ran for the Republican nomination in 1968) since the Watergate crucifixion in 1973–1974, and that both parties are now having great difficulty staying within the bounds of moderation. Today, two-thirds of Americans think the country is headed in the wrong direction, the Democratic nominee’s trust level among voters is an archeological level of about a third of the voters, and even after the heavy Democratic batteries have spoken, the polls show Americans fairly evenly divided.

I will make a hazardous prediction: I think that Hillary Clinton, in the words of Senate majority leader Mitch McConnell, when his fellow-Republicans were drinking the Kool Aid about the pre-ordained unacceptability of Donald Trump, will “drop like a hot rock.” I am not ignoring the shortcomings of Trump as a candidate for such a great office. His short temper, tendency to braggadocio, vagueness on many issues and the orgy of political incorrectness that the scores of millions of Archie Bunkers in America find so endearing, are not the type-casters’ model of a successful challenge to the ultimate former incumbent, thundering on the door of the people’s house one more time.

But that is the point. The people haven’t entirely figured out that it all started to go horribly wrong when one of the most successful administrations in history was torn down over the idiocy of Watergate. The president who ended school segregation, the draft, the endless riots, the hijackings and the assassinations, founded the Environmental Protection Agency and opened relations with China, began the Middle East peace process, and signed the greatest arms-control agreement in history, bungled Watergate; but there has never been any evidence that he committed any illegalities, and certainly not anything to justify removal from office.

Hillary Clinton lied to federal officials, has been verbally indicted by the FBI director (even as he declined to indict her formally), has never answered any serious questions about the tangled relationship between the Clinton Foundation and the Clinton State Department, or even about her miraculous profits as a neophyte commodities trader in the Whitewater affair; her offenses vastly exceed anything Richard Nixon did, and her accomplishments are comparatively minimal. Most Americans don’t analyze their recent history as precisely as this, but they are very disappointed and angry and do not particularly want any more pleasantries and civilities. That was all they got from the Bushes and Romneys and others, and Donald Trump suits the mood of a “huge” number of Americans.

The Democrats fired their national chairperson as their convention opened, for abuse of her position at the expense of Senator Sanders. The public are as disgusted with the Washington media as with the office-holders attached to the furniture in the great offices of the land. The same media who still ululate with triumph at the salvation they engineered by bloodlessly assassinating Nixon and delivering Indochina to the uneven mercies of Pol Pot and the North Vietnamese Communists were lured from their spurious caves of nonpartisanship by the Democratic convention. The token Republican on the ten-member CNN panel that drooled with glee over Bloomberg’s shabby, envious speech were purring like tabbies after Hillary’s platitudinous exercise in the make-believe that her candidacy had not been grievously wounded by decades of self-indulgence and extensive misconduct.

Donald Trump is an improbable savior, and may not be a savior in the end. But he is not complicit in twenty years of the great housing bubble followed by the Great Recession, or in doubling in just seven years the national debt accumulated in the 233 previous years of American history (to produce economic growth of 1 percent), or in giving a green light to Iranian nuclear arms which Clinton and Obama shouted themselves hoarse saying they would stop; or in miring the conventional armed forces of the country for a decade in ridiculous wars in the Middle East that gave most of Iraq to Iran and left the West allied with Iran and Russia in the remnants of Iraq but opposed to them in the war-torn carcass of Syria, while costing scores of thousands of American casualties and trillions of dollars and generating an immense humanitarian crisis. Donald Trump did not invent the evaporating Red Line, is not afraid to utter the words “Islamist terrorism” when it occurs, did not sleep while the ambassador in Libya was murdered or apologize to the Muslims of the world over irrelevant activities of an individual American anti-Muslim creator of home-videos. He didn’t tell the Joint Chiefs of Staff that climate change was the greatest threat to the United States and didn’t call the Fort Hood massacre “workplace violence.”