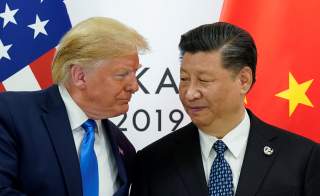 With the United States and China preparing to restart trade negotiations in October, the operative question for President Donald Trump remains whether China will risk mortal economic wounds to defeat the United States. Since the beginning of the trade war, the White House has assumed that it isn’t. Trump, for example, has declared, “I think they [the Chinese leadership] wanna make a deal, and I think they should make a deal, and I think if they don’t make a deal, it’s gonna be very bad for China.”

More than a year since the trade war started, Trump and Chinese president Xi Jinping are still locked in a bruising feud, with no signs of China surrendering. Larry Kudlow, who directs the U.S. National Economic Council, is adamant. "The economic burden of these tariffs is falling most heavily on China,” he says. “probably by a factor of 4 to 1 or 5 to 1." Yet no movement from Beijing. So where’s the Trump administration gone wrong? The answer: For China, the trade war is less about economics—and more about politics.

It’s no secret that China has long eyed rivaling the United States politically. That demands it alter the relative balance of power with the United States, regardless of whether—in the short term—it erodes its own absolute strength economically. For years, China hesitated to make that play. Its economy was too vulnerable and too dependent on the U.S. market. No longer. With the capacity to diversify its export portfolio, Xi sees an opening. The trade war presents an opportunity to apply maximum pressure to its rival.

It’s hardly novel to observe that China plays power politics. The point, however, easily gets lost amid a fog of economic data guiding Trump’s every move. Tariffs hurt China’s economy now, but Xi cares more about the country’s race for superpower status in the long run. As tariffs mount, the odds of a global recession spike. Yet China is more fixated on pushing the United States over the edge—disturbing its internal affairs and delicate relations with Western allies—than ensuring a healthy economy at home.

The plan has been undeniably effective. It’s unleashed a flurry of discontent both at home and abroad. In Washington, Democrats have charged Trump with recklessness. Predictably, Trump has flailed about, insisting that his gut punch to China is richly deserved. Across the country, the trade war has also entrenched partisan polarization. According to a national survey from the Chicago Council, 72 percent of Republicans support “raising tariffs on products imported from China,” whereas 71 percent of Democrats oppose it.

Globally, as evidenced by the recent G-7 summit, Western leaders continue to break with Trump’s handling of China. Germany's Angela Merkel, France’s Emmanuel Macron, and the UK’s Boris Johnson have urged an end to the trade war. The trade war has also backfired in unexpected ways. Expert Michael Schuman notes that “[a]s China and the U.S. drift apart, a new pattern of global relations may be emerging . . . China and Russia are probably friendlier today than they were for most of the period when both were Communist.”

With the trade war, China has proven that it can go toe-to-toe with the United States. That legitimizes China in a way that, for decades, double-digit growth rates and tough talk couldn’t. Despite engaging in unfair trade practices, China has also cleverly painted the United States as the trade aggressor. China’s tariff retaliations haven’t involved classic authoritarian-style shakedown tactics. Rather, they’ve been largely proportionate—even reasonable. That’s critical for a rising superpower hoping to be taken seriously.

The bottom line: For China, the trade war is chiefly about politics, not economics. China ran a trade surplus of more than $300 billion in 2018, but that’s beside the point. China will go much farther than Trump originally envisioned to sink the United States. It already has. For Trump, the political calculation then becomes what’s the least-worst scenario. Should he continue to confront China, even if his actions spark a recession? Or should he appease China and expose himself a flip-flopper? As China intended, Trump is in a no-win spot.

Thomas Gift is a Lecturer of Political Science and Director of the Philosophy, Politics, and Economics (PPE) programme at UCL.