Why Trump Is Capitalizing On Obama's U.S.-Vietnam Comprehensive Partnership 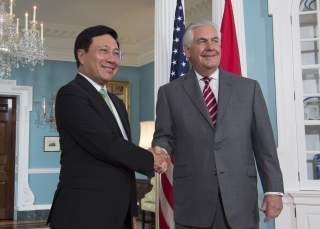 For quite some time since the election of Donald Trump, it has been expected that the new U.S. president will radically reduce America’s engagement in Asia. Anticipating a decline in U.S. influence as a result of this policy shift, many also believe that pivotal states in the region—such as Vietnam—is also adjusting their alignment, moving closer to China. These impressions have proven wrong with the meeting of President Trump and Vietnam’s prime minister Nguyen Xuan Phuc in the White House on May 31.

The Trump administration is not reversing the course of U.S. policy regarding the Asia-Pacific region. It may be even more forceful than the Obama administration in the South China Sea. This message emanates from the Joint Statement for Enhancing the Comprehensive Partnership between the United States and Vietnam, issued after the meeting between the two leaders.

The change of the White House’s resident early this year cast a thick cloud over U.S. foreign policy. Campaign pledges by the new U.S. president have caused many to believe that Washington will cut down its security commitment to allies and partners, punish those that post a large trade surplus with the United States, and ignore several multilateral forums. This has not happened, and is unlikely to happen, at least with regard to the Asia-Pacific region.

The U.S.-Vietnam joint statement reiterates that the United States is a “Pacific power with widespread interests and commitments throughout the Asia Pacific.” It maintains all elements of the U.S.-Vietnam Comprehensive Partnership that was established during the Obama administration. It goes a step further, stating that President Trump and Prime Minister Phuc are committed to making the partnership “deeper, more substantive, and more effective.” For the first time the two former enemies stress at the summit level their “pledge to strengthen cooperation in the fields of security and intelligence.”

The U.S.-Vietnam joint statement reiterates the Trump administration’s commitment to major regional forums, such as the Asia Pacific Economic Cooperation and the Association of Southeast Asian Nations (ASEAN). It also reaffirms U.S. support for ASEAN centrality in the evolving regional architecture.

The single most important change in U.S. policy toward the Asia-Pacific region remains Washington’s withdrawal from the Trans-Pacific Partnership. But this has not been—and is unlikely to be—followed by massive protectionist measures. Rather than unilaterally raising import tariffs against some leading contributors to the huge U.S. trade deficit, the Trump administration has sat down with them to find ways to redress the trade balance. Japan, the second largest contributor, was the first that engaged in such a dialogue with the Trump administration, followed by China, the largest one, and now Vietnam, which had the sixth largest trade surplus with the United States last year.

Prime Minister Phuc’s early visit to the United States has strengthened a new trend in Vietnamese foreign policy. For most of the last two decades, Vietnam was more hesitant than proactive in contact with its former enemy. This posture was reversed after the oil-rig crisis of 2014, when China deployed its biggest oil rig into Vietnam’s exclusive economic zone. Last October, Vietnam dispatched to the United States the number two in the ruling Politburo, Executive Secretary of the Communist Party of Vietnam Dinh The Huynh. The visit was unprecedented for such a high-ranking official in the Communist Party.

Hanoi’s active diplomacy also underscores Vietnam’s leadership role in ASEAN. For most of the last two decades, it was Singapore and the Philippines that led the rest of the ASEAN countries in engaging the United States. Now it’s Vietnam. Prime Minister Phuc was the first ASEAN leader to be a guest of President Trump. His trip will be followed later this year by a visit of Vietnam’s defense minister to the United States. And when President Trump comes to Da Nang in November for this year’s Asia Pacific Economic Cooperation meeting, he will stay longer for an official visit to Vietnam.

Contrary to popular beliefs that have surfaced since the election of Donald Trump, Vietnam is not leaning to China, and the United States is not radically changing its policy toward Asia.

Alexander L. Vuving is Professor at the Daniel K. Inouye Asia-Pacific Center for Security Studies. The views expressed in this article are his own.