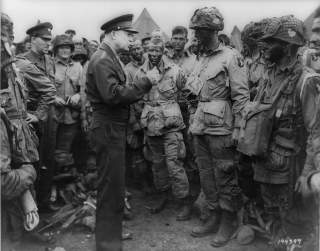 Donald Trump is unique in American history, but there is a president he resembles: Dwight Eisenhower. Trump’s caution about foreign military adventures and his revival of economic nationalism echo the five-star general who successfully guided America through equally perilous times.

Everyone knows that Ike warned Americans about a military-industrial complex that had dangerous influence. Less known is that Eisenhower refused to engage the United States in what he regarded as a military sideshow: the communist insurgency in Vietnam against a vestige of French imperialism. As France lurched toward a final defeat at the Battle of Dien Bien Phu, President Eisenhower remarked of Southeast Asia: “I say that I cannot conceive of a greater tragedy for America than to get heavily involved now in an all-out war in any of those regions…”

Eisenhower knew that the main contemporary threat to the United States was the Soviet Union and that Europe was the central battlefield, both in terms of where combat might occur and where the battle of ideas between freedom and communism was taking place. He did not neglect developments elsewhere, but he avoided getting U.S. troops bogged down in other people’s wars in order to focus on what was critical. (His successors tragically reversed course in Vietnam.)

Trump exhibits Eisenhower’s caution and clarity of thought. The New York businessman wants to defeat ISIS and is the first presidential nominee to take radical Islam and its underlying ideology seriously. However, he has rejected calls for jumping into the Syrian Civil War from those ranging from Hillary Clinton to John McCain—essentially today’s military-industrial complex. When a biased ABC News moderator badgered him about Syria and Iraq in a debate, Trump stood his ground: “Right now, Syria is fighting ISIS. We have people that want to fight both at the same time... I believe we have to get ISIS. We have to worry about ISIS before we can get too much more involved.”

This type of common sense is viewed as unsophisticated by the Washington foreign policy establishment, but Americans by more than two-to-one rightly believe that we do not have a responsibility to get involved in someone else’s civil war.

Trump also wants good relations with Russia, which is anathema to Clinton, who previously was spurned by Moscow and takes it personally. McCain and the neoconservatives also demand U.S.-led confrontation of Moscow, even though the Europeans in proximity to Russia spend a pittance on defense. Trump’s observation of this imbalance only deepens their rage, but it harkens to Ike’s refusal to write a blank check for the French in Vietnam.

Eisenhower’s economics also had a place for nationalism in a manner similar to Trump’s. Eisenhower talked up free trade in his State of the Union addresses, but he was careful to call only for “profitable trade” and expanded foreign manufacturing only for mutual defense with goods “not seriously competitive with our own normal peacetime production.” He emphasized “the flow of private American investment abroad”—the opposite of what has prevailed since mid-70s, when America started running serial trade deficits.

Just as important was what Eisenhower did not do: interfere with the massive housing boom during his tenure. Americans who finally had the resources to flee squalid cities for the suburbs in the 1950s caused housing stock to increase 27 percent nationally, which itself contributed to economic prosperity from a building boom. Ike allowed consumer-led free choice to prevail in contrast to Hillary Clinton and other would-be central planners who want to dictate our health care and energy sectors.

Ike’s approach to trade and expanding domestic growth stands in stark contrast to recent trade and visa policies established by our elite, which facilitate the flow of manufacturing abroad and employment of foreign workers. Trump and Eisenhower would agree that we have today is not free trade, but managed trade—and managed poorly at that.

What Trump offers is a set of economic and defense policies aimed at putting America first. That sounds terribly trite to many experts, as well as corporations that want cheap foreign labor. But many American voters think otherwise.

Christian Whiton was a deputy special envoy at the State Department during the George W. Bush administration. He is the author of “Smart Power: Between Diplomacy and War.”

Image: By Unknown U.S. Army photographer - This image is available from the United States Library of Congress's Prints and Photographs division under the digital ID cph.3a26521.