Why Trump Needs Robots on Mars (Not People) 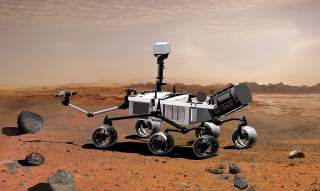 Donald Trump recently signed a bill authorizing $19.5 billion in funding for NASA, which will support NASA in completing a human mission to Mars by 2033. In his statement at the signing of the bill, Trump listed “human space exploration” among the core missions of NASA. It does not seem that the authorization and prioritization is the result of extensive deliberations by the White House about the merit of “manned” missions versus those carried out by smarter and more agile robots that are guided by artificial intelligence.

The decision to send human beings to Mars instead of robots raises many ethical and policy questions. The refusal to rely on robots endangers lives, vastly increases the costs of the mission and greatly delays further exploration of Mars. Don’t take it from me (although I have been making the argument since 1964, when my book The Moon-Doggle was published). British astronomer Martin Rees writes: “I think that the practical case (for manned flights) gets weaker and weaker with every advance in robotics and miniaturization. It's hard to see any particular reason or purpose in going back to the moon or indeed sending people into space at all.” Nobel laureate Steven Weinberg calls manned missions “an incredible waste of money” and argues that “for the cost of putting a few people on a very limited set of locations on Mars we could have dozens of unmanned, robotic missions roving all over Mars.”

Roger Wiens, a scientist at Los Alamos National Laboratory, notes that any person who landed on Mars would only be able to return following the assembling of “a relatively large rocket on the Martian surface to blast the astronauts back into orbit. It would be extremely costly, not to mention incredibly risky.”

Because the return from Mars is the costliest and most technically challenging part of the mission, some astronauts, including Buzz Aldrin, have suggested that any human mission to Mars should be a one-way trip; in plain English, a suicide mission. Even if the two-way trip could be successfully completed, Laurie Zoloth, a professor of medical ethics and humanities at Northwestern University, notes that in addition to the obvious medical and physiological risks of such a proposal, there are also significant psychosocial risks for those who engage in such a voyage.

In response, NASA’s Administrator Charles Bolden argues that the first humans to go to Mars would be serving the greater good of humanity: “If this species is to survive indefinitely, we need to become a multi-planet species. So one reason we need to go to Mars is so we can learn a little about living on another planet, so when Mikaley, my granddaughter, is ready to move out of the solar system we’ll know a lot more about living away from this planet than we know today.” Very touching. Anybody who feels a burning need to become a member of a “multi-planet species” should make donations to NASA’s manned missions. The rest of us may wish to invest our ingenuity and research and development efforts and dollars in other missions.

Regardless of whether we send humans or robots to Mars, these missions are of limited use here on Earth. The basic problem is that deep space—NASA’s favorite turf—is a distant, hostile and barren place, the study of which yields few major discoveries and an abundance of overhyped claims. For example, in 2010 NASA announced that it had made discoveries on Mars “that [would] impact the search for evidence of extraterrestrial life,” but its officials ultimately admitted that they had “no definitive detection of Martian organics.” The discovery that prompted the initial press release—that NASA had discovered a possible arsenic pathway in metabolism and that life was thus theoretically possible under conditions different than those on Earth—was then thoroughly rebutted by a panel of NASA-selected experts.

Trump is looking for places to find funds to finance his wall, thousands of new border patrol and U.S. Immigration and Customs Enforcement agents, a major tax cut without increasing the deficit and debt, and a big increase in the defense budget. Sending robots to Mars instead of humans can pay part of those bills—without denying humans anything they need.

Amitai Etzioni is a university professor and professor of international relations at George Washington University, which recently published his position paper, “The China Options.”