Why Trump Needs the Iran Deal 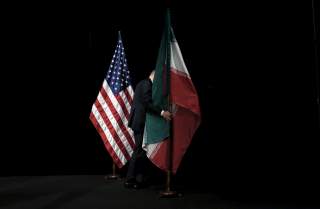 Diplomacy is supposed to be the vehicle by which U.S. leaders and officials secure American security and economic interests abroad. Trump’s threat to decertify the Iran nuclear deal, whatever flaws may legitimately exist, threatens to cause severe damage to America’s interests in the medium and long term.

The intent to scuttle this agreement continues a troubling and serious erosion of U.S. diplomacy. In isolation, decertifying the deal with Iran is unequivocally counter to U.S. interests. It will not only remove existing constraints on the regime’s ability to develop nuclear weapons, but will harden Iranian resolve against any future bargain with the United States—and possibly more damaging—it could make allies and partners across the globe conclude that the United States is no longer a trustworthy international leader, harming America’s ability to conclude future agreements that may be necessary to advance U.S. economic interests.

One need not be an apologist for the Iranian dictatorship to advocate adherence to the existing plan. We should soberly acknowledge the human-rights abuses Iran’s leaders commit against their own people, the regime’s support of terrorism and the threat their developing ballistic-missile program may pose. But it is critical that Trump avoid the propensity to believe that U.S. policy in a complex international environment can be set merely by selecting U.S. preferences.

In a perfect world, it would be America’s preference to see Iran cease its ballistic-missile program, entirely shelve its nuclear enrichment capability and end all support to international terror organizations. But we don’t live in a perfect world. We have to find the best confluence of influencing our adversaries and cooperating with our friends, while not worsening our current position. Ending the Joint Comprehensive Plan of Action (JCPOA) with Iran would unequivocally, materially worsen both our near-term and long-term interests across the globe.

If the president decertifies and Congress later junks the JCPOA, the meaningful controls currently constraining the Iranian regime’s ability to develop a nuclear-weapons capability will be removed. Iran will then have every motivation to begin the program that U.S. intelligence confirms it scrapped in 2003. Many neocons in the Trump administration would likely then begin threatening military strikes again—which would push the mullahs all the more rapidly into a crash course to develop a nuclear deterrent as quickly as possible.

This would unequivocally be antithetical to U.S. and Israeli security interests. Going to war with Iran before it reaches this threshold would turn the current inferno of the Middle East into a veritable smelting furnace that would likely consume U.S. interests beyond recognition. After a meeting on Thursday that included discussion of the situation in Iran, President Trump told reporters, “Maybe it’s the calm before the storm.”

It is a dangerous misapprehension of the considerable risks the United States would incur if the president believes U.S. armed forces could destroy Iran or its regime in a cost-effective way. Iran is nearly double the size of Iraq, and the violence and terrorism it could unleash in retaliation should America attack would be orders of magnitude worse than anything we’ve suffered since 2001.

Moreover, junking the JCPOA would harm our interests with friends and allies, likely diminishing our ability to secure future trade and security deals beneficial to our country. If allies such as France, Germany, or Japan believe that America will agree to a deal today, only to disregard it when a new administration enters office or we simply change our minds later, they will be far, far less likely to bind their national interests to ours. If our friends can’t trust our word, our adversaries can trust us even less—which poses a far greater danger than appears.

The most obvious example is North Korea. We claim to be seeking a diplomatic solution with dictator Kim Jong-un, trying to coerce him into giving up the only independent means he has to defend himself against U.S. attack. Were Kim to see the United States simply disregard its agreement with Iran after years of painstaking negotiations, he will logically conclude that it would be suicidal to give up his nuclear weapons, and thus he will hold on to—and continue developing—his program at all costs. Such an outcome is clearly counter to U.S. interests.

Yet the most important potential harm could come in future discussions or negotiations with China and Russia. America currently desires discussions and negotiations with Russia regarding sovereignty of Crimea and Ukraine. It is in American interests to ensure borders are not changed by force, and that any that were return to their rightful sovereignty.

If Washington hopes to have the slightest influence on the actions of Moscow or Beijing, or desires each to make meaningful concessions, those parties have to believe the United States will abide by whatever agreement is reached. If either believes they can’t trust us to abide by our word, the chances of reaching meaningful agreement is virtually nil.

With important issues facing our country—subjects that affect every American today, such as health-care restructuring, tax reform and thorny questions over gun control—the last thing the country needs is for the president to upend an agreement that is in place and certifiably meeting U.S. security objectives. There are alternative methods to address genuine concerns with Iranian behavior, but gutting our diplomatic credibility will only harm our interests.

Daniel L. Davis is a former lieutenant colonel in the U.S. Army who retired in 2015 after twenty-one years, including four combat deployments. Follow him @DanielLDavis1.

Image: A staff member removes the Iranian flag from the stage after a group picture with foreign ministers and representatives of Unites States, Iran, China, Russia, Britain, Germany, France and the European Union during the Iran nuclear talks at the Vienna International Center in Vienna, Austria July 14, 2015. Iran and six major world powers reached a nuclear deal on Tuesday, capping more than a decade of on-off negotiations with an agreement that could potentially transform the Middle East, and which Israel called an "historic surrender". REUTERS/Carlos Barria