Why Trump Is Right to Target China With Tariffs 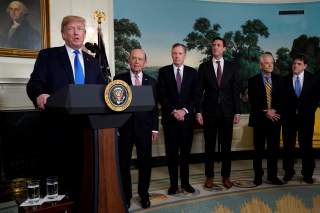 President Donald Trump has demonstrated beyond reasonable doubt that he’s willing and able to disrupt and overhaul a decades-old U.S. trade policy status quo, including with global trade behemoth China. If you’re still skeptical, ask anyone involved in American agriculture (which had until recently enjoyed privileged status in U.S. trade policy). Moreover, there’s impressive evidence that Trump has thrown the Chinese leadership back on its heels—notably, its frantic but clueless efforts to enlist in support of its resistance American business and financial elites that manifestly lack any meaningful influence on the president’s thinking.

Now Trump needs to take two more steps in order to achieve a victory that brings maximal benefits to the American economy. First, he needs to make clear a new end-game. Second, he needs a much more effective public relations campaign to counter powerful and growing special interest opposition.

According to numerous administration statements, Trump is seeking a “reciprocal” Sino-American trading and broader economic relationship that results in a much smaller bilateral trade deficit. This will presumably result from Beijing’s agreement to stop stealing and extorting the U.S. companies’ intellectual property, and help to put the United States—and other foreign-owned companies—on an equal footing with Chinese-owned competitors in the China market in order to make the People’s Republic an easier place for non-Chinese firms to do business.

Yet however seemingly commonsensical, both singly and collectively, these positions are or could be either contradictory, unrealistic, counterproductive, or some combination thereof. For example, measures that encourage more and more profitable American investment in China could well balloon the trade deficit, since much of it will surely be export-oriented, and since the United States is such an important market for a Chinese economy that still depends significantly on overseas sales for acceptable growth levels.

In addition, how are American officials supposed to monitor and enforce Chinese promises to eliminate the subsidies and discriminatory government procurement programs that comprise the Made in China 2025 program to promote Chinese global superiority in numerous high-tech sectors as well as so many other Chinese industrial and technological development efforts? Are they supposed to achieve that goal by being deployed in the Chinese ministries (both in the central government and provincial and city governments) and looking over the shoulders of Chinese bureaucrats?

A far better American goal is to disengage economically from China as quickly as possible. A U.S. business community with a shrinking China footprint will have less and less intellectual property to lose, and reduce Beijing’s opportunities to use U.S. know-how to strengthen its economy and high-tech capabilities for reasons having nothing to do with free-market forces, and to bolster its military. And fewer American companies operating in China will be contributing to China’s economic growth and overall prosperity, or to the mammoth bilateral trade imbalance.

Further, despite fears that the American economy will suffer grievously, too, more and more research portrays the costs (and of course any major policy change will exact at least short-term costs) as eminently bearable—whether measured in terms of consumer costs and other inflation measures, and especially compared with the stimulus the economy is receiving from the recent corporate and individual tax cuts.

Undoubtedly, Chinese retaliation could cost U.S. businesses and their workers valuable earnings opportunities and the resulting benefits of global scale, whether through supplying the Chinese market through exports or serving Chinese customers through operations in China (e.g., American banks and retailer like Starbucks). Over the longer term, however, China’s fundamental economic strategy should make clear to these companies that they’re toast in the People’s Republic, anyway. For as made clear most recently by the Made in China 2025 program, Beijing rejects the foundational principle of the current global trading system—to create the most efficient possible global division of labor. Instead, Chinese leaders see absolutely no reason for a country as large as China to remain dependent on foreign supplies of anything for a moment longer than necessary.

As a result, Trump’s current tariffs on Chinese products should be kept in place, and all threatened levies should be imposed. Indeed, the firmer the U.S. commitment to disengagement appears, then the likelier it is that the tariffs will induce businesses—both foreign and American—to remove China from their supply chains rather than rely on riding out a temporary storm. (Democrats who have long been critical of the nation’s China trade policy could help immensely in this respect by swallowing their distaste for the president’s personality and his other policies by pledging their support on tariffs.)

But more must be done on other fronts, too. One leading example: The administration has made a good start toward restricting inbound direct investment from China on national- and economic-security grounds, and a newly passed law shows that Congress is generally on board. But such Chinese acquisitions of hard (as opposed to financial) U.S. assets (like businesses and property) pose a broader threat to America. Because China is a nonmarket economy (and has been classified as such by the World Trade Organization) its economic entities are by definition arms of the state, often receive substantial subsidies, and typically feature governance structures as secretive as China’s official bureaucracy. As such, their operations inevitably distort competition within America’s domestic economy. If the nation is serious about promoting as much genuinely free market competition as possible, then China should be denied any footprint in the real (as opposed to financial) economy.

Even a Trump decision to pursue a clear disengagement strategy could well fail, however, without a much more comprehensive and intensive administration sales effort. It’s true that Trump has been talking and tweeting about tariffs and trade wars throughout his presidency. But his focus has always been on his determination to reach a much smarter deal with the Chinese (along with all other trade competitors), not on the kind of big about-face that disengagement would represent.

In addition, brief statements on Twitter and at campaign rallies are completely inadequate to the task. Because disengagement would be so disruptive, even if accomplished gradually, and therefore would generate numerous anguished complaints that a user-friendly American political system would certainly keep amplifying, a full-dress Oval Office speech by Trump is absolutely essential. Only in this solemn venue will the president be able to explain fully the towering long-term economic and strategic stakes, and justify the needed shorter-term sacrifices. And if it takes a series of such addresses, then so be it.

The administration also needs to be much sharper in rebutting its opponents’ charges that “devastating” tariff effects are already rippling through the U.S. economy, especially since official data abounds exposes these claims as fake news—at least in regards to the metals levies that started to be imposed in late March.

It's also time for the president and his aides to showcase to the media more examples of companies moving production and jobs back to the United States from China due to the tariffs, or fears thereof, and even shifting supply chain nodes from China to third countries. If the goal is reducing the China threat, then it’s perfectly fine if other countries—especially those that are allies of the United States—benefit as well.

Additionally, any responsible disengagement policy must acknowledge American vulnerabilities and come up with plans to minimize or end them. One of special concern: domestic U.S. manufacturing has become troublingly dependent on many Chinese-made parts and components. The administration must figure out exactly what sectors are most affected, where acceptable other foreign substitutes are available, and where fostering investments in new American capability are essential.

Finally, and most importantly, the administration should finally start recognizing the glaringly obvious links between disengaging from China on the one hand, and creating a North American Free Trade Agreement (NAFTA) that enriches all three signatory countries. The key is turning North America into a genuine trade bloc, complete with the kinds of high external tariffs needed to force Asian and European businesses to supply this gigantic and lucrative market by making many more of their products inside it rather than exporting to it.

Mexico in particular would be a big winner, since it’s in a great position to replace China as the producer of many of the labor-intensive goods Americans import and where the United States has understandably lost global competitiveness for good. And there’s a strong case for bringing Central America into the arrangement, too, and thereby fostering its economic development—especially for a president who’s anxious to bring illegal immigration from all these countries under control.

President Trump has brought America’s China trade policy further from its past failures than his opponents—and even many neutral, fair-minded observers—thought possible. But without a clearer and viable direction, and the full-court policy press that a major strategic reversal requires, he will never take America to the finish line.