Why Trump Should Meet Kim in Vladivostok 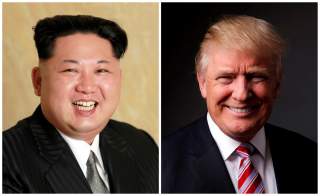 One of the main intriguing questions about the possible summit between President Donald Trump and North Korean supreme leader Kim Jong-un is the venue for this unprecedented event. The Russian Far East should be a serious possibility among the various choices.

Places all over the world map are being suggested—from Guam to Sweden. Of course, the North Koreans themselves would prefer that Trump to pay a visit to Pyongyang. After all, in 2000 one of his presidential predecessors, Bill Clinton, was already very close to making a trip to the DPRK (and finally made it, but, alas, later, not in the status of POTUS). But this time a president’s arrival in North Korea is highly unlikely. It would make Kim Jong-un look like the master of the situation, with Trump being the supplicant.

Panmunjom, a location in the neutral area in the demilitarized zone on the border between the North and South, is another possible venue. However, it lacks appropriate facilities for such a grand event, although the meeting with ROK President Moon Jae-in scheduled for late April could be a good rehearsal. It is likely, however, that Trump would not want to use the same place for a second time in just one month, as it would diminish the spectacular effect of his historic rendezvous with the North Korean leader.

Holding a meeting on South Korean soil, in Seoul or on Jeju Island, is another option. Yet going to the South may not be acceptable to Kim, as this might be seen as giving too much credit to the South Koreans. There is also an issue of security and trust. Would Kim be willing to travel and stay in a country where he is by constitution a leader of an unlawful entity and where a significant portion of the population, including many in the ROK establishment, exhibit a strong aversion to the North Korean regime. Millions might march against him, as the latest demonstrations in Seoul have shown.

Kim himself suggested being treated at the White House but that might be politically difficult for the American establishment. How about Europe, Southeast Asia or Mongolia? Kim may be reluctant to travel so far from home for a variety of obvious reasons, including logistical ones. Getting to Sweden, for example, would require a stopover in Moscow. It should be kept in mind, moreover, that he has never been abroad as leader of North Korea, so the logistical issues are not minor.

China is an obvious possible option. Beijing, Shenyang or Changchun, would all be logical venues given their proximity to the DPRK border and the availability of overland routes. Yet relations between the two formal allies have hit unprecedented lows in recent years. Pyongyang doesn’t trust Beijing and feels resentful about China’s enforcement of harsh penalties on North Korea. Kim knows that his delegation would be subject to control and Chinese influence in Beijing. The North Koreans seek to avoid dependence on China and would not want to place the Chinese in that powerful position of brokers/mediators that the host status would confer on them. We are hearing from North Korean sources that China as the summit host is absolutely out of the question.

That leaves Russia as the most feasible option. The Russian Far East’s main city, Vladivostok, is just one hundred miles from the North Korean border. Kim Jong-un can safely travel there by air, on his personal train (his father’s preferred mode of making voyages), or even by an automobile cortege. Speaking of Kim Jong-un’s father, Kim Jong-il visited the Russian Far East, including Vladivostok, several times in the 2000s. He had personal nostalgic feelings as well, since he was actually born near Khabarovsk, where his father stayed during the World War II. Vladivostok possesses world-class convention facilities that were originally built to host the APEC summit in 2012, which are perfect from the point of security, being located on the picturesque Russky Island off the Vladivostok coast. As an aside, many North Korean guest workers participated in the construction of this modern and attractive facility with a majestic view of the Pacific Ocean. Owned by Far Eastern Federal University, the convention facilities have since hosted high-profile international events, above all annual Eastern Economic Forums attended by Prime Minister Shinzo Abe, President Moon and other national leaders. Importantly, both the United States and the DPRK maintain consulates in Vladivostok. These consulates will make logistics and security concerns even easier.

Russia has repeatedly suggested Vladivostok as a possible venue for international talks involving North Korea—a sort of a standing invitation. It was one of the options for a possible meeting between Kim Jong-il and Kim Dae-jung in the 2000s, but Putin chose Irkutsk as the suggested venue for the meeting (which never materialized despite Kim Jong Il’s approval). Russian officials would be willing to offer its Far Eastern capital as a convenient place for the Trump-Kim summit, although so far no serious discussions with North Koreans have been held. However, among the major powers, Moscow currently enjoys the best relations with the North and there are lots of contacts (the forthcoming minister-level intergovernmental commission meeting is one example) and channels, where the issue might be discussed. To be sure, Pyongyang trusts no one, but it distrusts the Russians the least. For the North Koreans (and the South Koreans, too), Russia is influential enough to carry weight on the peninsula, but, in contrast to China, her influence does not carry the risk of becoming too overbearing. This is why Kim Jong-un might well like the Vladivostok option, and his security service would be much relieved in comparison to other locations.

The “Russian angle” can be important per se. Vladimir Putin might himself show up in Vladivostok to have bilateral conversations both with the North Korean leader (the first of its kind, and much persuasion might be done on his part) and the first meeting on Russian soil with President Trump. A formal Russia-U.S. summit would be difficult now for a number of well-known reasons. Putin himself stated that Russia “can act as an intermediary” in resolving the crisis on the Korean Peninsula. Why then not an informal dinner for the two adversaries, maybe not over hamburgers, but with Russian kulebyaka as a main dish? That should not seem artificial, because Russia has major stakes in a resolution of the crisis. Apart from stemming nuclear proliferation—Moscow’s perennial interest as a nuclear superpower—the successful settlement will remove the danger of a war on Russia’s doorstep and help Russia realize ambitious economic projects such as connecting the Trans-Siberian with the Trans-Korean rail network. It is important that Putin enjoys close and trustful relations with Xi Jinping. This means Beijing, a crucial player on the peninsula, will have to hide its possible hard feelings with respect to the idea of a U.S.-North Korea summit hosted by Russia, but China’s interests will be respected. South Korea probably would not protest excessively, as it might be the second best possibility to meeting in the ROK.

It may be trickier for Trump to agree to go to Vladivostok given the parlous state of politics between the United States and Russia, but almost all sensible American diplomats and scholars share the opinion that communication channels must remain wide open with the Kremlin—precisely for the purpose of finding solutions to the world’s most pressing challenges, such as the North Korea nuclear crisis. There is no denying that President Trump and President Putin have some positive chemistry, as was revealed when their scheduled chat for thirty minutes at the G-20 in Hamburg lasted more than two hours. It’s actually not so strange since both men are realist, pragmatists with a lot of genuine challenges on their collective plate. Whatever “low politics” might be involved in the so-called “Russia investigation” should be put aside in favor of the “high-politics” of achieving a stable agreement to defuse the dangerous North Korea nuclear crisis. That is a goal all Americans can get behind and Vladivostok is simply the best, feasible option for these all-important negotiations. If President Moon and Prime Minister Abe can go to Vladivostok and talk amiably with Putin about the North Korea situation as they did in September 2017, then surely Trump can do the same. Finally, Trump has made the exceedingly bold decision to meet face-to-face with Kim and this may not have been as impulsive as initial reports suggested. That implies his move was calculated strategy and he will not be encumbered or constrained by some craven, partisan bickering regarding the venue.

Trump going to Vladivostok to talk to Kim Jong-un, and possibly meeting there with Putin too, might provide an opportunity to resurrect the U.S.-Russia strategic dialogue. The lack of it is becoming simply dangerous, especially considering Putin’s recent unveiling of an array of new nuclear weapons and United States moves to bolster its nuclear arsenal. Incidentally, Vladivostok was the place where, in 1974, Soviet leader Leonid Brezhnev and President Gerald Ford held successful talks on arms control. In this case, it will not be a bad thing if history repeats itself.