Why Trump Turned In His Best Performance of Any Debate 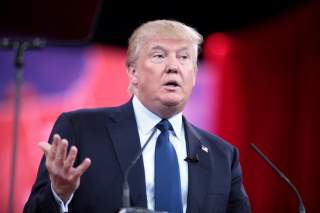 Journalists who wrote their obituaries for Donald Trump over the weekend were premature once again. Trump’s campaign was first supposed to have “imploded” over a year ago, when he made disparaging remarks about John McCain’s capture in Vietnam; yet he went on to win the Republican nomination. After audio leaked Friday of sexist comments Trump made eleven years ago—in which he boasted of kissing and groping women, as well as failing to seduce a married acquaintance—commentators were certain that this was really the end. Of course, it wasn’t.

Trump turned in his best performance of any debate last night, after he took the stage at Washington University in St. Louis for a townhall-style showdown with Hillary Clinton. Yet at first the conventional wisdom seemed correct: Trump was more than low-key at the start, he was downright low-energy. He was on the defensive, trying to explain away this latest scandal as “locker-room talk,” while Clinton hammered him not only for what he said about women, but for his statements about Muslims, Hispanics, and the handicapped. She overreached. Trump had already survived those uproars; now the latest one became was just another addition to the litany.

Indeed, Trump turned the tables on Clinton. The debate was less about his failings as a human being than hers as a senator and secretary of state. She didn’t press for tax reform in the Senate, he insisted. She voted for the Iraq War. She didn’t know who those “moderate rebels” she wanted to arm in Syria really were, and by toppling Gaddafi she cleared the way for ISIS in Libya. She had the nerve to attack Trump for insulting tweets he wrote at 3 AM one night—but what was Clinton doing at 3 AM on the night Ambassador Chris Stevens was murdered in Benghazi? She didn’t take the time to answer the ambassador’s pleas for help, Trump charged, but she checked in with her political consiligiere Sidney Blumethal.

Questions from the audience—selected from undecided voters in the St. Louis area—wound up favoring Trump. One voter voiced the dissatisfaction that millions of Americans feel about Obamacare’s rising costs. Trump had an easier time criticizing the law and empathizing with Americans angered by its escalating prices than Clinton did in explaining how she would reform the legislation. She focused instead on emphasizing the millions of Americans who now have health insurance for the first time and the provision forbidding insurance companies from turning away customers with pre-existing conditions. The trouble with this defense, however, is that most Americans had health insurance before Obamacare—only now that insurance costs more than ever.

A question about energy gave Trump an opening to champion coal against the EPA and to segue into other industries, notably steel. With an eye to Pennsylvania, he denounced cheap Chinese steel imports. Clinton retorted that Trump used that dumped Chinese steel for his building projects. The exchange symbolized the dynamic of the night: Clinton tended not to focus on general problems faced by Americans but on specific failings of Trump himself. Her pitch was, in effect, that all is right with America, and only this man Trump is engaged in shady practices, whether in his private life, with his tax returns, or in his real estate empire. If voters disagree—if they think that Trump, for all his troubling qualities, is at least correct about the plight of the country—Clinton may yet have a rude awakening on Nov. 8.

Trump emphasized not just Clinton’s perfidy—though he had plenty to say about her emails and her coziness with Wall Street—but also the threats of radical Islamic terrorism and unfair trade practices. Trump even made a pitch to Bernie Sanders voters, more than once, in fact. He said Clinton had effectively cheated to win the Democratic nomination, and he quoted Sanders as saying that her judgment could never be trusted. (Trump applied that especially to her vote for the Iraq War.) For her part, Clinton alluded twice to Republicans—including former congressmen—who agree with her that Trump is unfit for office. But without naming names, as Trump named Sanders, the impact was negligible.

Clinton’s answers throughout the night were detailed and diffuse. Audience members could tell she knew her facts—but what was her theme, other than that Trump was unacceptable? On one issue, she did have a clear thrust. Unfortunately for foreign-policy realists and antiwar progressives alike, that issue was Russia’s involvement in Syria’s civil war. She insisted that she did not want U.S. troops on the ground in that conflict—even as she talked about sending more special forces and advisors—but she strongly condemned Russia’s support for Assad, in tones that suggested some confrontation with Moscow over Syria would be certain in a Clinton administration.

“I want to emphasize that what is at stake here is the ambitions and the aggressiveness of Russia,” she said. “Russia has decided that it's all in, in Syria. And they've also decided who they want to see become president of the United States, too, and it's not me. I've stood up to Russia. I've taken on Putin and others, and I would do that as president.”

Trump had a markedly different view of the situation in Syria: “I don't like Assad at all, but Assad is killing ISIS. Russia is killing ISIS. And Iran is killing ISIS. And those three have now lined up because of our weak foreign policy.” For Trump, America’s interest in Syria lay in seeing ISIS defeated, not in engaging in humanitarian projects. He reiterated his rejection of accepting more Syrian refugees and called again for “extreme vetting” of immigration from Muslim countries. Clinton charged that Trump’s remarks were only helping ISIS—“We are not at war with Islam. And it is a mistake and it plays into the hands of the terrorists to act as though we are”—and she argued that ISIS had to be defeated “in a coalition with majority Muslim nations.”

Clinton made no major missteps, except perhaps in the eyes of those who see the gravest of dangers in her saber-rattling toward Russia. Yet she lost momentum to Trump; after the first round of questions, it was she, rather than he, who was on the defensive.

Will any of this matter in November? The idea that Trump is a uniquely weak Republican is an unshakable article of faith among the commentariat. But state polling throughout the political season has shown an electoral map that looks remarkably like those of 2008 and 2012. If Clinton is lucky, she’ll win back North Carolina this year, after Obama lost it in 2012. But she looks set to lose Iowa, which Obama won twice. Trump, for his part, not only has to win Florida and Ohio—twin victories that any Republican would have a hard time pulling off—but he has to make up for Virginia’s drift into the Democratic orbit — a drift that has nothing to do with Trump’s own candidacy and everything to do with the growth of the D.C. suburbs in Northern Virginia.

The Democrats have a geographic and demographic advantage in the America of 2016. There were never going to be many states in play, no matter who won the GOP nomination. Would Marco Rubio really have put Virginia or his own Florida into contention, when he lost the Republican contests in both states to Trump? Establishment Republicans eager to blame the party’s woes on the celebrity billionaire are making the same mistake Hillary Clinton made in last night’s debate. Trump is not the cause of the GOP’s problems or the country’s. He’s a response to them—an answer, whether right or wrong, to America’s gnawing dissatisfaction with its bipartisan elite.