Why Trump Was Right About Bush's 9/11 Record 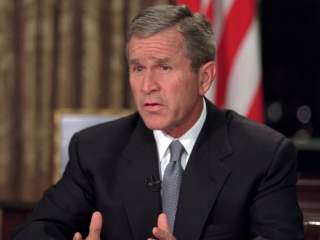 The 9/11 catastrophe again became a subject of contention at the South Carolina GOP debate on Saturday. Jeb Bush maintained that his brother George W. Bush kept us safe. Donald Trump argued that he did not; the World Trade Center came down on his watch. As our forthcoming study on follies of U.S. policy-makers concludes, not just the CIA, as Trump repeatedly stated, but also Vladimir Putin, Richard Clarke and Gary Hart issued warnings to President Bush and/or Rice before September 11, 2001.

Indeed, not only Bush, but also his national security adviser Condoleezza Rice flagrantly disregarded Russian President Vladimir Putin’s warning of a coming attack on our homeland. Putin warned both of them at a June 16, 2001, summit in Slovenia. He didn’t know the date. In Rice’s later words, “Putin. . . was right. The Taliban and al Qaeda were time bombs that would explode on September 11, 2001. . . I was taken aback by Putin’s alarm and vehemence.”

But not by Putin alone were Bush and Condi warned.

Two holdovers from the Bill Clinton administration, who also worked for “W”, Clarke, head of counter-terrorism in the Bush NSC, and CIA Director George Tenet, repeatedly warned Rice of a coming attack. Trump has repeatedly mentioned the CIA warnings. What he did not say, is that not just “W” but also Rice was responsible. Rice did not let Clarke get close to the president and even demoted him from his senior position at the NSC. She compelled him to report only to the deputies of the NSC principals.

Tenet called Rice on July 10, 2001, to sound the alarm once again about an impending attack. Clearly Rice did not pay high level attention to the Islamic terrorism threat in June and July. At this crucial meeting Tenet, Cofer Black, chief of the CIA’s counter-terrorism center, and a CIA operative, identified only as Rich B., confirmed to Rice that “key Chechen Islamic terrorist leader, Ibn Kattab, “has promised some 'very big news' to his troops.” Tenet’s account reveals a long-standing counter-terrorism arrangement with the Russians and linkage between Chechen terrorism and al Qai’da. Likely, Putin’s earlier warnings were based on the Russian FSB’s penetration of Chechen terrorists. The significant factor is that when Rice asked, “What should we do,” Cofer Black answered, “This country needs to go on a war footing now.” But that did not happen.

The date of July 10 was significant for another reason. Members of the 9/11 Commission later became convinced that the CIA had never told them about the July 10 meeting. It was not even mentioned in the final report. We still don’t know who had an interest in downplaying the importance of that meeting. To Tenet this is still a mystery. It happened most likely because this meeting was so damning. Rice must have told the President about the suggestion to go on a war footing, but the suggestion must have been rejected.

Only on August 6 did the CIA Director, Tenet, finally get to brief the president directly with the now famous memo entitled, “Bin Laden determined to Strike in U.S.” A few weeks after this Presidential Daily Briefing (PDB), Tenet personally went to Bush’s Crawford Ranch in Texas for the first time to make sure Bush understood its meaning and importance. But still nothing happened. The person who had the closest working relationship with Bush was Rice, who traveled with him to Crawford. As usual, she was the last to talk to Bush about an important issue.

Finally, we also learned from Senator Hart, former co-chair of a bipartisan commission on national security, that he personally warned Condi too. On September 6, 2001, Hart met with Rice and urged, “You must move more quickly on homeland security. An attack is going to happen.” He, like Clarke, later accused Bush and Rice of ignoring his warnings. Hart did not see the president, but Rice had multiple warnings—Putin, Tenet, Black, Rich B., Clarke and Hart. However, Condi denied responsibility while testifying at the 9/11 Commission. She even had a hard time recalling the name of the damning August 6 memo.

We admire “W” for his strong response to terrorism after 9/11. Jeb Bush is right about that. His brother responded brilliantly to 9/11 by going to the source with his invasion of Afghanistan. Trump did not mention this. However, Bush and Rice failed to anticipate and defend us from the 9/11 attack before it happened. Then, instead of finishing the job in Afghanistan and capturing bin Laden, the NSC bureaucracy prepared for the wrong war at the wrong time in 2003 Iraq. They completely ignored the North Korean path of Iran towards the attainment of nuclear weapons. Nation-building in Iraq was repeated by Obama and Hillary in Libya and tried in Syria, all to ill effect.

As both Clarke and Donald Rumsfeld noted, Condi monopolized Bush. She made herself the channel for information from various staff he should have directly consulted to make his own decisions. If Bush’s security people had enjoyed direct access to him, if the CIA and Clarke could have fully briefed him, and if all the warnings were heeded, then there is a likelihood that the attack could have been prevented and 2,753 lives saved.

Finally, as we severely criticized President Putin for his Ukrainian intervention, we must say that we still give him kudos for his warning and desire to help America in its struggle against Islamic terrorism at that time. In Rice’s words, he saw the struggle against terrorism at that time as the “new epicenter of Russia’s relationship with the United States.” Only when the West began to support the 2003-2004 color revolutions in the Ukraine and Georgia did Putin begin speaking not of cooperation but of the “encirclement of Russia” by the aggressive United States.

We also applaud Trump: instead of following the GOP’s politically correct line of never criticizing a president of one’s own party, he rejects political correctness and calls things as he sees them.

Henry Kissinger has argued that the deep international crises affecting the globe provide a unique opportunity to build a new world order. It is doubtful that President Obama, in the remaining time of his tenure, will be able to engage in such an effort with Putin. Among the Republican presidential contenders, moreover, it is only Trump who proposes a policy of limited partnership with Russia in Syria. No wonder Putin already de facto cast a vote for him for the first time in Russian history during the primaries. If he wins, the primaries and general election perhaps he and Putin will return to the original Putin doctrine: The struggle against terrorism as the new epicenter of Russia’s relationship with the United States. This is one of the reasons why the 2016 elections are of such crucial importance in preventing a new Cold War.

Jiri Valenta is President of the Institute of Post-Communist Studies and Terrorism. (This article is based on excerpts of our forthcoming book, Follies of U.S. Policy-makers: 9/11, Iraq War of Choice and Benghazi-gate, Copyright, JVLV.) A long-standing member of the Council on Foreign Relations, he is the recipient of numerous prestigious fellowships—Brookings, CFR, Woodrow Wilson Rockefeller, Peace Institute, Fulbright and more, as well as grants from the PEW and Konrad Adenauer Foundations. He is also the author of Soviet Intervention in Czechoslovakia, 1968, Anatomy of a Decision and other books.