Why Trump Was the Real Loser in Alabama 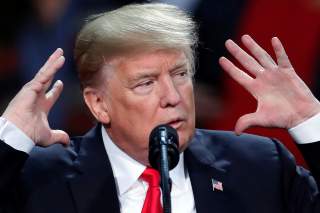 Roy Moore’s victory party last night in Birmingham, Alabama was blasting Lynyrd Skynyrd’s southern rock anthem “Sweet Home Alabama.” At the outset of the song, lead vocalist Ronnie Van Sant ordered, “Turn it up.” But the crowd yesterday was quickly stilled by the news that their man had lost his crusade to enter the Senate. And so there was no sweetness, only bitterness, for Moore’s myrmidons as the finality of the election result sunk in. Too lazy, or too scared, or too something to bother campaigning, Moore had spent the weekend at West Point, where he watched the Army-Navy game, which the Black Knights won in a squeaker over the Midshipmen. By one point in fact, the very same margin by which Democratic candidate Doug Jones surpassed, or, to put it more precisely, outhustled, the hapless Moore last night.

The consequences for Donald Trump may well be dire. Yes, it’s possible to argue that Alabama is one-off with no broader national implications. Roy Moore was a louse, someone who never had a chance of winning. And so on. But this may well be a case of whistling past the political graveyard.

The fact is that Trump and Steve Bannon went all-in, but the charge of Trump’s ideological light brigade ended up becoming a fresh lost cause. By the end of the campaign, Trump was vociferously backing Moore, both declaring that Jones, a supporter of abortion rights and stricter background checks on guns, was a bad hombre and that the allegations about Moore’s misdeeds were nothing more than fictions cooked up in some Democratic political operative’s laboratory. Now Trump stands exposed. For him the result is all pain and no gain. This is the second in Alabama that he has been unable to deliver his base; the first time was when he scorned the advice of Bannon and endorsed Luther Strange; the second was when he heeded the advice of Bannon and endorsed Moore, compounding his original error. In this instance, Trump would have been wiser to have listened to Mitch McConnell, the savvy leader of the Senate, who saw disaster coming and tried to avert it, but was stymied by the reality TV show director in the White House, who apparently thinks that he can conduct the government via his Twitter account.

So far Trump’s approach has yielded him steadily sagging polls and zero legislative accomplishments. The one bill that he hopes to point to is tax reductions for the highest sliver of the wealthy—to call it reform would be a misnomer of the highest order—that repudiates the very populist stands he enunciated during the election. By futilely endorsing Moore, Trump has essentially become a hostage of McConnell and House speaker Paul Ryan.

Trump is vulnerable on two fronts, which is why he will be almost wholly reliant on this duo for protection. The first is of course the Russia investigation. Trump’s lawyers appear to be totally out of their league when it comes to dealing with Special Counsel Robert Mueller’s legal team. Whether Mueller ends up targeting Trump or simply his associates remains an open question. But time may be running out for Trump: if the Democrats, as is now more likely, take both the House and Senate his presidency will be imperiled. The possibility that the GOP turns on Trump in an effort to preserve its congressional seats and that Trump, in turn, resigns the presidency this summer can no longer be discounted. With the passage of the tax bill, as Steve Bannon has noted, establishment Republicans really don’t need Trump any longer.

But perhaps the most dangerous development for Trump is the resurgence of interest in his past sexual history. Russia, shmussia. It’s a complicated story. There are too many moving parts for the public to get overly excited about. But sex? The question pretty much answers itself. Writing in the Washington Post, Karen Tumulty points to the dangers for Trump as the #MeToo movement gathers force. She observes, “Democrats Doug Jones’s unlikely victory may also be a sign that the formula for winning in a deeply polarized political climate, perfected by Trump, may not be so reliable as it seemed.”

Indeed, Trump yesterday tweeted that in exchange for campaign donations, New York Sen. Kirsten Gillibrand “would,” as he put it, “do anything…” You don’t have to possess a mind in the gutter, as White House spokesman Sarah Huckabee Sanders put it yesterday, to decipher that the president is essentially calling another Senator a prostitute. Gillibrand, who views herself as presidential timber, seized the opportunity to raise her profile by declaring that Trump could never “silence” her and other women. With Democrats demanding an investigation of Trump on this front, the pitfalls are many, both for him and the GOP. The coming months will reveal whether Trump can reboot after Alabama or whether it’s curtains for him.