Why Trump Will Double Down on Foreign Policy in 2019 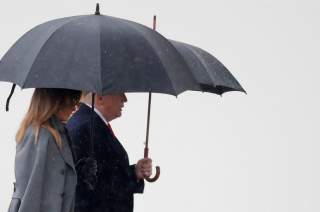 As if one wasn’t enough, there will be two Trump presidencies starting from January. With the Democrats in control of the House of Representatives, the White House will find it more difficult than ever to pursue a productive domestic agenda. Tax cuts, immigration reforms, border security, changes to healthcare—none of this will happen under divided government. As a result, President Trump’s attention will drift inexorably toward foreign affairs, an arena in which presidents usually enjoy a freer hand to implement policies of their choice. The Trump presidency will thus be bifurcated: hobbled and ineffective at home but forceful, energetic, and eager for “wins” abroad.

It was the political scientist Aaron Wildavsky who, over fifty years ago, coined the “Two Presidencies" thesis. He pinpointed several reasons why presidents enjoy more success in foreign policy than domestic policy. First, foreign affairs tend to be more consequential than domestic issues, especially when questions of national security are at stake. Wildavsky argued that presidents approach the international realm with President Kennedy's assertion in mind that while domestic policy "can only defeat us; foreign policy can kill us." This leads them to adopt stances that are intended to serve the national interest instead of narrow partisan ambition.

Partly because the stakes are so high, Wildavsky argued that lawmakers give presidents more leeway in international affairs than they would ever entertain for domestic matters—allowing presidents to navigate foreign policy without having to pay undue attention to the home front. But even when Congress is not in the mood for working alongside the president, the Constitution gives the Executive branch sweeping powers to act unilaterally in foreign and defense policy—powers that modern presidents have not been shy of using.

For Trump, the lesson is that he might still be able to accrue an impressive record of achievements ahead of his 2020 reelection bid even if his domestic agenda encounters roadblocks on Capitol Hill, as is expected. One possibility could be peace with North Korea or, if things go awry, a return to headline-grabbing brinksmanship and belligerency toward Pyongyang. Another option is an expanded trade war with China and other foreign governments or a buildup of conventional and nuclear forces. Trump could also take an even harder line on Iran and withdraw from yet more international treaties and organizations that are unpopular with the Republican faithful. All of these are potential policies that Trump could pursue in hopes of racking up a nominal “win” in foreign affairs.

Some major foreign policy moves could be made by the President acting alone. This is especially true concerning military policy and diplomacy. But it is even widely held that presidents can withdraw from treaties and international organizations without Congressional approval. And under existing laws, Congress has delegated enormous powers to the Executive branch in areas such as trade and immigration. Advisers like John Bolton, a long-time skeptic of international law; Peter Navarro, Trump’s protectionist trade adviser; and Stephen Miller, the chief architect of Trump’s immigration policies, might, therefore, become even more influential than they already are if the Trump administration does indeed pivot to focus more heavily on foreign policy.

Even so, the President’s powers over foreign policy are not unfettered. Trump will need Congressional approval for anything that involves new spending commitments, for example. But unlike in 1966, when Wildavsky penned the Two Presidencies thesis, deference to the president’s foreign-policy agenda can no longer be taken for granted. In the Cold War, the two branches of government mostly shared a common reading of the international system. Today, however, even politicians of the same party cannot agree on how to define, prioritize, or respond to the external threats and opportunities facing the United States. The result is that Congress today is often willing to buck the president’s foreign policy agenda.

Just ask Trump’s predecessor. In his first term, President Obama faced strident opposition from Republican lawmakers for his handling of the Libya intervention and his supposed weakness in offering to negotiate with adversaries like North Korea. In his second term, Obama was forced to conclude the Iran nuclear deal and the Paris Climate Agreement in ways that almost bypassed Congress altogether. On issues of trade, Obama even faced stiff opposition from his party. All in all, historians of the Obama years are unlikely to point to foreign policy as an area where the president enjoyed a free hand.

Is it possible that Trump will win over lawmakers from the opposing party in a way that Obama never managed to do? He might take inspiration from President Clinton, for example, who benefited from Republican support in Congress to pass both NAFTA and Permanent Normal Trading Relations with China, his two signature achievements on trade. If enough Democrats are willing to cooperate, Trump might be replicate Clinton's strategy of triangulation to find political pathways to several foreign-policy objectives: protectionist trade bills, a downsizing of U.S. military commitments in the Middle East, or a peace treaty with North Korea, to name just some possible examples.

More likely than not, however, the prevailing partisan rancor in Washington, D.C. means that the Democrats will do all in their power to thwart Trump’s plans. Hyper-partisanship has a way of keeping parties together and stopping lawmakers from reaching across the aisle. To be sure, control of just one chamber of Congress has its limits: the Democrats can obstruct the President’s agenda much more than they can proactively shape or constrain it. But obstructionist tactics can still bite. Democrats could oppose hikes to military spending (especially an unnecessary nuclear buildup) and persist with uncomfortable investigations into Trump’s past relations with foreign entities. Moreover, they could challenge presidential uses of force, defend economic openness, or undermine the (already precarious) diplomatic process to denuclearize North Korea.

When Wildavsky wrote his thesis, there were two powerful reasons why presidents enjoyed more success in foreign affairs than domestic policy: broad Executive powers over foreign policymaking and bipartisanship in Congress. Today, only the first of these conditions remains in place. But if Trump is forced to pursue his foreign policy agenda (such as it is) in the face of staunch criticism from emboldened Democratic lawmakers, then he will do so without hesitation. In the run-up to World War II, FDR once confided that “It’s a terrible thing to look over your shoulder when you are trying to lead and find no one there.” By contrast, President Trump will take delight in provoking his domestic opponents via divisive foreign policies, reveling in the opportunity to distance himself from the internationalist and “globalist” agenda of the Democrats and mainstream Republicans.

Denied the opportunity to enact policies at home that are popular with his base, the President will find it hard to resist the temptation to act imperially on the world stage. This will be the second Trump presidency that takes shape next year: partisan, combative, ambitious, and focused on delivering international achievements that can be attributed to President Trump alone.