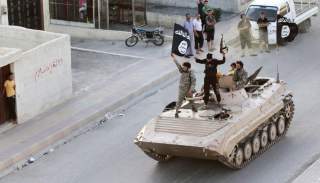 Praise between members of opposing political parties is so rare these days that it should be highlighted when it does occur. Last month, President Obama’s foreign-affairs adviser, Ben Rhodes, was asked at the Chicago Council on Global Affairs what he thought President Trump’s biggest success abroad was so far. Rhodes, a sharp critic of the president and Republicans, thought for a moment, then responded: “There has been significant progress against ISIS.”

He’s right, and he could go even further. The campaign against ISIS is something of an anomaly. So far, nearly all of the Trump administration’s foreign-policy initiatives fall into one of two buckets: “in progress” or “not yet in progress.” The NAFTA negotiations and State Department restructuring, both ongoing, both fall into the first bucket. A raft of new bilateral trade deals, recommended but queued up for consideration behind NAFTA, would fall into the second bucket.

This division is to be expected only a few months into office. Foreign policy takes time. But it also means that, to date, the Trump administration has not had to deal with the consequences of success—with the outcome of policies planned, implemented, done and dusted. That is, except for with ISIS.

Categorically, ISIS has not yet been defeated in Syria and Iraq. But the so-called Islamic State has been degraded to an astounding extent in the last few months. Iraqi and Syrian forces are steadily pushing toward their shared border. ISIS holds a dissolving sliver of land. With a whimper, the terrorist group is falling apart as fighters surrender or desert. At the same time, each of the major players in the region—Damascus, Baghdad, Riyadh and Tehran, as well as Washington and now Moscow—is increasingly shifting its attention and resources elsewhere. As a focal point for nearly all sides to rally against, the Islamic State’s time has come and gone.

Nor is the degradation of Islamic State due solely to a stepped-up U.S. military effort. Bashar al-Assad’s regime, supported by Russia and Iran, wrought much of the violence and destruction in Syria. In Iraq, Baghdad’s army carried out most of the on-the-ground fighting against ISIS, even when trained and aided by U.S. troops. Kurdish forces in both countries have also been essential.

Whole cities sit in rubble and millions of people remain displaced, yet Rhodes’s point stands nonetheless. The fall of ISIS will be seen as an early accomplishment for the Trump White House, and precisely because the president decided to aim squarely at the terrorist threat. His predecessor, instead, took a Whac-A-Mole approach to the full labor of issues in the conflict and the region, striking down none definitively.

But is Trump now prepared for success? And is he prepared for what comes next? Because the thing about success is that it creates its own set of problems and expectations.

First, what should America do about Assad? President Obama’s “red line” fiasco prevents the current administration from calling for the Syrian leader’s immediate ouster. But the United States should be loathe to ever hold any diplomatic relations with the man who has overseen such wanton massacre and mass displacement. A reasonable timetable for his departure—and ostracization of the Syrian regime until at that point—remains just and necessary.

Second, where does the collapse of ISIS leave a rapprochement with Russia? Cooperation against the common threat of ISIS, it was hoped, would be a foundation for wider cooperation between Washington and Moscow on more delicate issues such as Ukraine. Hope aside, the manner in which the fight against ISIS played out meant there was limited substantive collaboration on the ground, and even less new goodwill generated in the capitals. Rapprochement remains possible, but on many of the persisting issues Moscow and Washington stand more at odds than in line.

Third, is Libya next? As their territory thinned in Syria and Iraq, many ISIS fighters decamped for the North African nation, attempting to establish an Islamic State redux. Here the United States must work with Italy, France and other NATO allies, many of whom should be eager to prevent another Islamic State and stem a potentially stronger flood of refugees from North Africa into Western Europe. As well, the United States should reassess its piecemeal scattering of troops and cooperative security locations from Senegal to Djibouti to prioritize fighting terrorist threats.

In all, these new and renewed problems for the White House join an already long list of global items to deal with. It’s true: “There has been significant progress against ISIS.” But the goal for the Trump administration now is to add to that accomplishment.

John Richard Cookson is a foreign affairs researcher who has written for CNN.com, the National Interest and the Hill.

Image: Militant Islamist fighters take part in a military parade along the streets of northern Raqqa province June 30, 2014. Militant Islamist fighters held a parade in Syria's northern Raqqa province to celebrate their declaration of an Islamic "caliphate" after the group captured territory in neighbouring Iraq, a monitoring service said. The Islamic State, an al Qaeda offshoot previously known as Islamic State in Iraq and the Levant (ISIL), posted pictures online on Sunday of people waving black flags from cars and holding guns in the air, the SITE monitoring service said. REUTERS/Stringer