Why Trump Is Winning on Impeachment 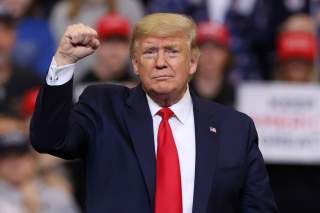 The impeachment trial of President Donald Trump has reached its bedraggled end with Sen. Lisa Murkowski’s (R-Alaska) decision not to vote for new witnesses or documents. In her plaintive statement on Friday, Murkowski said, “It is sad for me to admit that, as an institution, the Congress has failed.” She did not explain—other than to decry partisanship—what that failure consisted of or indeed what would have constituted success.

Like Sen. Lamar Alexander (R-Tenn.), however, who also declined to vote for witnesses, her role in the proceedings has now become peripheral. It is Senate Majority Leader Mitch McConnell (R-Ky.), an opponent of further witnesses from the outset, who has fortified his position as Trump’s most reliable and formidable ally by ensuring that the trial never posed a real threat to Trump. The trial may go into next week as the White House ponders its final concluding arguments, but the outcome is clear. Trump will head into his State of the Union address on Tuesday evening assured that he will be acquitted by the Senate.

For Trump, the trial was not a failure but a vindication, or at least he’s trying to present it as one. At his rally in Des Moines, Iowa on Thursday, Trump was in an upbeat mood. According to Ryan Lizza in Politico, “At the Des Moines rally impeachment was treated by Trump and his fans as something to mock. Trump went on a long tangent about how the impeachments of Richard Nixon, Bill Clinton, and even Andrew Johnson were “dark” times in American history. In contrast, Trump said, `This is a happy period for us.’”

But he will continue to be dogged by the Ukraine affair through 2020. On Friday, a new leak of former national security adviser John Bolton’s book surfaced in the New York Times. It states that Bolton alleges that Trump asked him as early as May, in a meeting that included acting White House Chief of Staff Mick Mulvaney and White House Counsel Pat Cipollone, to pressure Volodymyr Zelensky, who had been elected president of Ukraine, for information about Joe and Hunter Biden. Bolton says he didn’t do it.

In response, Trump came out swinging: “I never instructed John Bolton to set up a meeting for Rudy Giuliani, one of the greatest corruption fighters in America and by far the greatest mayor in the history of N.Y.C., to meet with President Zelensky. That meeting never happened.” Of course, Trump has made similar apodictic statements in the past about events that he was involved in that have turned out to be bogus. But the slugfest between him and Bolton seems likely to increase in intensity.

With the White House trying to impede publication of his memoir, The Room Where It Happened, Bolton has every incentive to up the rhetorical stakes as much as possible. House Intelligence Committee head Adam Schiff may well ask Bolton to testify. In addressing the Senate on Friday on the latest Bolton allegation, Schiff said, “Just as we predicted, and it didn’t require any great act of clairvoyance, the facts will come out. They will continue to come out.” Former White House Chief of Staff John Kelly, who has previously stated that he trusts Bolton’s account, stated on Friday that the Senate, “In my view, they kind of leave themselves open to a lot of criticism. It seems it was half a trial.”

This is the banner that Trump’s critics will wave until the November election, declaring that Trump was acquitted but not exonerated (though it also turns out that in 1999 none other than Joe Biden argued against witnesses and a full-blown trial of Bill Clinton). Throughout, Trump’s lawyers never really offered a cogent defense of his actions. They left a gaping hole by arguing that the process was flawed but never mounted a defense of his actions.

Meanwhile, Trump’s defenders in the conservative media are depicting impeachment itself as an elitist enterprise. Daniel McCarthy, the editor of Modern Age, tweeted, “Remarkable how uncomfortable Democrats and pundits are with leaving Trump’s fate to the voters. If he’s as bad as you say, won’t the people vote him out? If they don’t, then your problem isn’t with Trump, it’s with America.” The real referendum on Trump’s actions and defense, in other words, will not arrive until November. Will it ratify Trump’s aspiration to become a transformational president? Or will it represent a backlash that swamps the GOP and Trump?