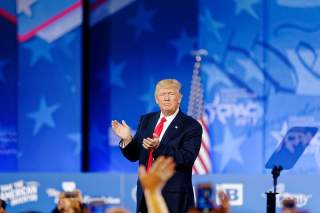 To get a sense of the state of the Republican Party, look no further than the thinly veiled war of words between President Donald Trump and former president George W. Bush.

Bush never directly criticized President Barack Obama during the last eight years, but it is hard to read his comments in a Today show interview as anything but anti-Trump. The forty-third president of the United States didn’t mention his first Republican successor by name, but conspicuously positioned himself against Trump on immigration, the press and Russia.

Yet Trump took the first shot during his speech at the Conservative Political Action Conference (CPAC). The president said the Middle East is “in much worse shape than it was 15 years ago” and “it’s not even close.”

“If our presidents would have gone to the beach for 15 years, we would be in much better shape than we are right now, that I can tell you,” Trump declared to fairly robust applause. Note that’s “presidents,” plural, and a timeline that extends further back than the Obama years—but not to Bill Clinton’s administration.

Not long ago, Bush was virtually beyond criticism at CPAC. Now, at the nation’s largest meeting of conservative activists, a Republican president of the United States can get a positive reaction by saying nicer things about socialist Bernie Sanders than about Dubya.

There were moments when CPAC felt like a reverse of the conferences of the Bush years. Bold proclamations about democracy promotion that once would have reverberated throughout the ballroom were marginalized, muscled aside by talk about nationalism, populism and Steve Bannon dismantling the administrative state.

Trump’s candidacy was in many respects a rejection of Bush’s innovations on conservatism. He called the Iraq War a “disaster.” He rejected amnesty and called for tighter immigration controls, not more leniency. He used Jeb Bush as a foil in debates, and blamed the Bushes for Democratic election victories, saying Abraham Lincoln couldn’t have won after the mess they made.

George W. Bush has to some extent rehabilitated himself in the age of Trump. He’s no longer the bumbler associated with Hurricane Katrina and missing weapons of mass destruction. He is instead among the chorus of decent people who raise their voices against Trump, if not quite a full-blown member of the Resistance.

But why the change-up at CPAC? One word: winning. Trump talks a lot about winning, and his conference address was no exception.

Bush was a winner once, even if, like Trump, he came up short in the popular vote once. He was elected president twice. For much of his first six years in office, Republicans controlled one or more houses of Congress. After Bush was re-elected, the GOP had a ten-seat majority in the Senate.

Trump has used both the former president and his brother as examples of Republican, even national, failure. He said the party establishment doesn’t know how to win, a criticism he has extended to John McCain and even House Speaker Paul Ryan.

But it was under Bush 43 that Republicans lost control of Congress. It was under his watch that the United States went into Iraq and Afghanistan, with no end in sight. The Bushes, Trump implied, with their emphasis on civility and manners, were good losers. Bushies within Never Trump were willing to lose to Hillary Clinton; Trump beat her.

When Bush stopped winning, conservatives became more willing to take issue with his policies and decisions. Some pent-up conservative criticism was let out after Bush nominated Harriet Miers to the Supreme Court, but as it became clear the 2006 elections were going to result in a Democratic landslide, the dam finally burst.

Right now, Trump is the winner. He won states Republicans haven’t carried at the presidential level since the 1980s. While his boast that he has set some kind of Electoral College record is false, he is the first Republican to clear 300 electoral votes since 1988. Democrats have done it four times in that time period.

Trump’s wins have improved conservative morale. So has the fact that while his tweets and temperament might have been as anti-Trump conservatives, he has done more conservative things in office than his right-wing detractors led them to expect.

That said, what happened to Bush shows the pitfalls for Trump. Bush had a deeper reservoir of goodwill among conservatives than Trump does, and started at a higher point in job approval ratings before the bottom dropped out.