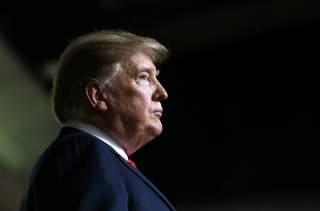 At the Munich and Warsaw conferences this past week, we saw once again the ritualistic gathering of the “Atlantic family”—the founders of the NATO alliance—coming together to one again announce unity and brotherhood.

Like all old families, the members are not equal, and the divisions are hardly hidden.

Let’s start with dispensing the polite fiction that when U.S. officials met their EU counterparts, it is a meeting of equals. It is not.

There are three types of power: military might, economic strength and cultural attraction.

The United States, despite media criticisms of its president, enjoys each of these types of power. It has the world’s largest and most powerful military. Americans, who comprise some 6 percent of the globe’s people, account for some 42 percent of the world’s economy. And America, despite televising its faults and flaws for a half-century, remains a beacon to immigrants and a benchmark to its rivals. (When China landed a spacecraft on the far side of the moon recently, its historic achievement was seen as playing catch-up with the United States that put its footprints in the lunar dust in 1969.) America’s currency and its version of English literally denominate and define world trade, even among its enemies and rivals. Russia sells its oil in U.S. dollars, Iran marks its artillery shells in inches, and most international contracts are in English.

Europe, by contrast, can boast only one and one-half of the measures of power. The EU population is roughly equivalent to the United States and its economic size is comparable in terms of output-per-capita. Yet its growth rate is sluggish, at less than 1 percent in 2018 compared to almost 4 percent for the United States that same year. Its cultural draw remains strong—immigrants continue to risk their lives to land on its increasingly hostile shores and its artistic output does reach out beyond its borders, though far less so than Hollywood or Silicon Valley does. But its twenty-five nations, and almost as many languages and cultures, do not speak with one voice and its institutions are mainly committees seeking compromise, rather than executives issuing commands.

In terms of military might, Europe is Lilliputian and, even united, cannot hold down a determined Gulliver like Russia. Only France, among the continental European powers, has the ability to project its military forces onto the shores of Africa and Asia. Indeed, the Europeans struggled to supply their own forces in Yugoslavia in the 1990s; today, U.S. C-130s deliver food, fuel and ammunition to European troops in Afghanistan. The Germans, the Poles, the Dutch and the Danes have excellent special forces and other specialized units, but they cannot deploy them far from Europe without U.S. airlift and logistics capabilities, or, to a lesser extent, French or British transport. The British and French have one aircraft carrier each and then are considering a plan to scrap those and share a single carrier. No European air force has the capability to refuel planes in flight, something the Americans have been doing since the 1950s.

Britain itself fields an army of roughly one hundred thousand soldiers—a force roughly equal to the national guard of California, Texas, Illinois and New York. And those guardsmen would have better equipment and more recent training experience.

So, the differences expressed in the speeches of German Chancellor Angela Merkel and U.S. Vice President Mike Pence—on Syria, Iran and multilateralism—mirror the differences in military capability and national will.

Behind the scenes, some European officials broke with Merkel’s criticism of Trump and expressed an understanding, if not a support, for the positions of the Trump administration. Officially, Europe does not want to take a hardline against Iran because it wants to trade with the Islamic Republic and fears the outcome of any armed conflict with the mullahs more than it fears their rising power in the region.

It was Vice President Pence who actually spoke for the United States. On Iran, his words were very hard. According to him, the mullahs’ regime is anti-Semitic, anti-democratic, dangerous. His call for Europe’s support is no longer a question of tactical evaluation, but of principles and values. He drew a line and asked them to choose sides.

He also made it clear that Europe will have to continue to increase its defense spending to meet NATO’s minimum required levels (in many cases, 2 percent of GDP), something that most European nations have not done in decades. Candidate Trump has kept his promise: America will not pay to be the policeman of the world.

Missing from the conversations was any vision regarding Russia and China.

Moscow is a military superpower but has an economy smaller than Germany and cultural power equal to Belgium. This may explain why the Trump administration does not see it as a great author of the world to come.

On the other hand, China is now the world’s second-largest economy, has developed a blue-water navy, sent satellites into orbit and spacecraft to the moon. And, at least within Asia, its culture continues to attract millions of non-Chinese.

More importantly, China is placing a big, strategic bet on “big data.” It is amassing vast amounts of information about its citizens and plans to issue a social-rating score for each of them. China is busily buying up communication companies around the world. The Chinese regime, without making waves, has a vision of influence and domination. It is building its own brave new world.

NATO’s role in confronting China is hard to see. The trans-Atlantic alliance was useful in besting the Soviets but will be of little use against the communist Chinese.

The world is heading toward a dangerous bipolarity between a country, whose actions can be criticized, but which embodies democratic values and defends human rights, and another regime, which seeks to surveil and control first its own citizens and then those of every other nation.

So far, neither the Trump administration nor the Europeans have outlined a vision for containing China. The Munich and Warsaw meetings largely ignored the Middle Kingdom.

Perhaps the presidential campaign, which is warming up now, will finally put China into the foreground.