Why Trump’s Tariffs May Push Europe Toward China and Russia 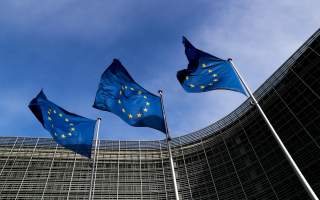 The Trump administration’s National Security Strategy, published late last year, called for a redoubling of efforts to stave off long-term strategic competitors, especially China and Russia. A crucial component of this strategy is rallying America’s traditional allies and partners against the threat posed by Chinese and Russian expansionism. A sensible strategy in an age of global geopolitical shifts, several of President Trump’s own actions, however, directly and indirectly contradicts this stated goal. Rather than bringing America’s European friends into the fold, Trump is severely undermining the transatlantic relationship and pushing allies further away, thus generating new space for Beijing and Moscow to wield influence.

Two recent actions taken by Trump perfectly illustrate this worrisome trend. The first one is the use of an arcane national security provision to impose unilateral trade tariffs on allied steel and aluminum producers. Having repeatedly slammed Europe, especially Germany, for running a trade surplus, Trump’s tariffs hardly come as a surprise to European leaders who have already promised to respond in-kind and take the U.S. to court in the WTO. The unfolding trade spat now risks unleashing a transatlantic trade war that would further add to the already frosty relations between Washington and European capitals. Needless to say, this is a far cry from the language found in the NSS about working with the EU to “ensure fair and reciprocal trade practices and eliminate barriers to growth”.

What’s more, the tariffs will now make it harder to forge a common transatlantic agenda toward China. Although the NSS pledges to “work with our partners to contest China’s unfair trade and economic practices,” President Trump has shown little interest in such an agenda. In fact, during his recent state visit in Washington President Macron’s allegedly offered cooperation on China only to be rebuffed by Trump who apparently views Europe as an equal, if not even worse, trade offender than Beijing. In reality, Trump’s tariff decision and efforts to undermine the WTO plays straight into China’s hands, making it seem like less of a trade offender, undermining joint transatlantic action, and reducing U.S. pressure on Beijing.

Moreover, the optics of slapping tariffs on allies while flip-flopping on the controversial Chinese technology company ZTE is devastating since it fails to differentiate between countries posing a legitimate threat to the United States and those that do not. The great irony here is that that key European capitals such as Paris and Berlin are themselves getting more serious about taking on China’s unfair economic practices at the same time that Trump is dismissing their offer to join hands. Because of Trump’s unilateral trade action and the potential for hurting transatlantic trade, European countries are now intensifying their outreach to Russia and China in an effort to improve trading relationships and put pressure on Trump.

For example, when Chinese foreign minister Wang Yi met with EU forging policy chief Federica Mogherini in Brussels last week, the two agreed to deepen cooperation and safeguard multilateralism. Chancellor Merkel opted for a more conciliatory stance towards China during her recent visit in Beijing, remarking that both Germany and China favors a rules-based trade system in hopes of opening up the Chinese market more for German exports. If Europe comes to see China as a partner in defending multilateral trade against Trump, taking a critical approach towards Beijing on specific issues could become more difficult. Meanwhile, President Macron recently attended the St. Petersburg International Economic Forum—a meeting typically shunned by Western leaders since the beginning of the 2014 Ukraine crisis—where he discussed closer trade relations with President Putin. During the visit, some 50 new contracts were signed between French and Russian companies, including a deal between Russian energy company Novatek and Total, which was just forced to abandon its business in Iran due to U.S. sanctions. Though this may not amount to full appeasement, such overtures still help grant Russia greater influence in Europe, weakens the country’s diplomatic isolation, and potentially jeopardizes the transatlantic sanctions regime against Moscow.

The other issue is Trump’s decision to pull out of the JCPOA nuclear deal with Iran, which has created the deepest rift across the Atlantic since the Iraq war invasion in early 2003. It is not only Trump’s willingness to pull out of a multilateral agreement—European diplomats were keenly aware the deal was unpopular among many Republicans in Washington—but especially the unilateral nature of his decision and refusal to take into account allied concerns that is the most upsetting.

Prior to Trump’s announcement, European diplomats remained hopeful and, at times even buoyant, that he would be amenable to negotiating a separate side-deal with the EU addressing some of the administration’s main concerns about JCPOA and Iran’s regional role. Indeed, the NSS even pledged that the U.S. and Europe would “work together to counter…threats posed by Iran.” Ultimately, Trump proved intransigent and dead-set on pulling out no matter what. His unilateral decision is further underpinned by threats to impose secondary sanctions against European companies doing business in Iran.

Given how strongly Europe feels about the Iran nuclear deal, pushing back against Trump’s decision inevitably requires making advances toward other players in order to try preserve the agreement and maintain foreign policy autonomy vis-à-vis Trump. Mogherini recently praised China for its helpful role on Iran and said China and the EU are working in “full coordination” to save the deal. Moreover, since Trump’s decision both Angela Merkel and Emmanuel Macron have discussed with Vladimir Putin about enhancing cooperation on Iran, allowing Russia to position itself as an indispensable partner and carve out a more positive agenda with Europe. Though Merkel has no illusions about Putin, their recent meeting in Sochi did strike a more cordial tone than normal. What’s more: Trump’s unilateral decision allows Beijing and Moscow to claim the moral high-ground while making Washington seem irresponsible and reckless in the eyes of Europeans.

While the current strategic drift between America and Europe is worrisome, it has yet to reach a real breaking point. Even under Trump, the U.S. remains committed to NATO and is actually even adding more resources to the alliance. But Trump’s unilateral approach on issues such as trade and Iran is highly counterproductive when it comes to the goal of getting Europeans on board with countering China and Russia. Rather than caving in to Trump’s demands, his recent actions on tariffs and the JCPOA deal has already produced calls in Europe—even among committed Atlanticists—to counterweight Washington by increasing strategic autonomy from the United States and forging stronger ties with other powers in order to defend European interests and multilateralism. In the long run, this could lead to further transatlantic decoupling, leaving Washington more isolated and less able to stand up to Beijing and Moscow.

In short, by picking the wrong fights—and going about the rights fights in the wrong way—Trump is undermining vital U.S. national interests of containing China and Russia. At the core of the problem is an inability to distinguish between America’s friends and adversaries. While the National Security Strategy speaks of “deepen[ing] collaboration with our European allies and partners to confront forces threatening to undermine our common values, security interests, and shared vision,” Trump is in reality ostracizing America’s European friends. The only winners of such a fraying transatlantic partnership are the leaders of China and Russia. But the worst part of it all is that Trump doesn’t seem to be bothered—or even aware—of the emerging strategic re-alignments taking place under his watch.

Erik Brattberg is Director of the Europe Program and Fellow at the Carnegie Endowment for International Peace in Washington, DC.