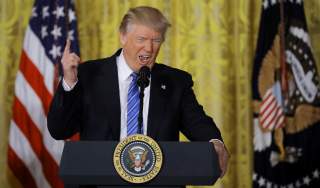 Has anyone else noticed that Donald Trump has yet to turn America into an authoritarian hellscape? The death knells for Western democracy, issued by Andrew Sullivan and others following Trump’s election in 2016, sound a bit hollow today. Trump appears to devote most of his waking hours to watching cable news and tweeting criticism.

The truth is that Donald Trump does not pose a long-term threat to the U.S. government. But he may pose a long-term threat to his own presidency. His blistering attacks against Attorney General Jeff Sessions are a case in point. Whether Trump’s base would swallow hard and accept his ouster is an open question; history shows that Sessions was first, out on issues like immigration long before Trump, who, incidentally, donated over $10,000 to Hillary Clinton from 2002–07. Breitbart says that the tensions between the two men “test foundation of populist nationalism.” Sessions’ former brethren in the Senate, including Richard Shelby and Lindsey Graham, are now issuing statements of support.

Nevertheless, Sessions, the president’s attorney general and early supporter, may be on his way out. Trump is reportedly searching for his replacement all while gratuitously attacking him on Twitter, with this morning’s outburst accusing Sessions of harboring “a VERY weak position on Hillary Clinton crimes . . . and Intel leakers!”

The president apparently never got over Sessions’ decision to recuse himself from the Russia investigation, which he views as a betrayal—that much is clear. But consider: with Sessions out of the way, it’s deputy attorney general Rod J. Rosenstein who is at the top of the Russia probe at the Justice Department. So why isn’t it Rosenstein in the crosshairs rather than Sessions? Why is the attorney general’s wholly necessary and sensible recusal drawing this level of scrutiny? Why would the president pile all this pressure on his attorney general in a transparent effort to force his resignation?

There’s something bigger at work here than just animus over the recusal. Trump has, in recent days, exhibited a deep insecurity over Robert Mueller, warning that the special counsel would cross a red line if he delved into Trump family business dealings that aren’t pertinent to Russia. He has ordered his lawyers to look into discrediting Mueller and intimated to his friend Chris Ruddy that he could fire the former FBI director outright. That last one is the sort of brutally simple “if A, then B” logic that the president loves: Mueller’s investigation is hamstringing his administration, ergo fire(or at least hinder) Mueller.

Jeff Sessions is thus a mere proxy battle between the president and the special prosecutor. Maybe Trump already requested that Sessions fire Mueller and Sessions refused; maybe Trump just blames Sessions for not disposing of the Russia imbroglio like he thinks a proper lawyer should; or maybe he’s beset by paranoia, seeing traitors in his midst and lashing out whenever and wherever he can. Whatever the case, Donald Trump, whose ascendance to the White House was the most seismic electoral shock in American history, who embodies the appetites of millions eager for change, is after only six months standing over a very dark precipice. Another Saturday Night Massacre is now within the realm of possibility.

Firing Mueller would send a jolt through Washington’s institutional circuit boards. Its insalubrious precedent would haunt Trump for the remainder of his presidency. Democrats would be handed an armory of political ammunition; demands for impeachment from currently marginalized liberals like Al Green would move into the mainstream. At the same time, the GOP would be forced to choose between its party boss and the integrity of the law, and enough House Republicans might just select the latter to land articles of impeachment on Senate majority leader Mitch McConnell’s desk. The media coverage, that cardinal metric of Trumpism, would be unremittingly savage.

Trump’s wariness of Mueller is actually sagacious, at least to a point. Ken Starr’s investigation into President Clinton began with the Whitewater deal and somehow careened through allegations of sexual harassment, consensual sex and, ultimately, the obstruction of justice and suborning of perjury in the Monica Lewinsky affair. Autonomous snoops scouring through the executive branch with broad subpoena powers and few restraints are at the very least constitutionally dubious. But this is nonetheless how the Trump administration decided to enforce the law and to derail Mueller now would be to impede the legal process.

That would be the real act of self-harm, not pushing out the attorney general, unseemly though that has been. Speaking of Sessions, one final concern: does Trump really want to send another disgruntled professional straight into the arms of a book publisher?