Why Trump's VA Pick Got Torpedoed 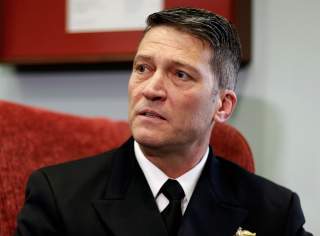 At about the same time that Rear Adm. Ronny Jackson, the now former White House physician and former combat medic in Iraq, was forced to withdraw from consideration to be the next secretary of the Veterans Administration, CIA Director Mike Pompeo was confirmed as the second Secretary of State in the Trump administration by a vote of fifty-seven to forty-two. There is no doubt that neither was qualified for these positions. However, Admiral Jackson was not forced to withdraw because of his lack of management experience to run an agency with nearly 370,000 employees and a budget of nearly $200 billion. He was forced to withdraw because of allegations against his personal and professional behavior, which were supposedly unknown to his superiors in the White House. If true, those allegations render Admiral Jackson inappropriate not only for a future cabinet officer but a current naval officer.

On the other hand, Secretary Pompeo actually committed a much more grievous personal offense. He led members of the Congress, the media, and the public to believe that he had actually fought in the first Gulf War. Pompeo never corrected half of his public biographies—including his Wikipedia page—and said nothing when fifty-one members of the Congress, led by Rep. Trey Gowdy, supported his appointment because of his war service, or when public publications across the political spectrum praised him for his service in that conflict.

I myself was misled, when relying on these sources I wrote about the fact that his war service was not something that should prevent him from a rigorous confirmation hearing any more than it did for Chuck Hagel when he was nominated by President Obama to be secretary of defense. Hagel not only served in Vietnam but was wounded twice there.

When Sen. John Tester, the ranking member of the Senate Veterans Committee, accused Jackson of personal and professional transgressions, I found it hard to believe that Jackson would have been allowed to serve in the White House under three presidents or have been promoted to admiral in the Navy if all these accusations were true.

According to Tester, former colleagues of Jackson claimed, among other things, that he drank to excess while on duty, handed out drugs liberally, created a hostile work environment, crashed a government vehicle while driving away from a Secret Service going away party, and had to be restrained by the Secret Service when on a trip he pounded on another White House official’s hotel room door. That door was close enough to President Obama’s room that Jackson risked disturbing the president.

Ironically, almost immediately after Admiral Jackson withdrew his nomination, it turned out that the most serious charges against him could not be verified. The day after he withdrew, a White House review of the Admiral’s vehicle records found no evidence that he crashed a vehicle after drinking at a Secret Service party. That same day, the Secret Service denied details of a report that its agents had intervened on a presidential trip in 2015 to prevent a supposedly inebriated Jackson from awakening President Obama by pounding on another White House official’s hotel door close to the president’s room. Finally, the White House produced two years of audits of the White House Medical Office’s handling of prescriptions and medications that showed no problems.

Moreover, several people who worked in the Obama White House had nothing but good things to say about the admiral. They included David Axelrod, a senior advisor to Obama, and Brian McKeon, the chief of staff to Obama’s National Security Council. In addition, President Obama himself praised Jackson, saying in a handwritten note in 2016, “Ronny does a great job—genuine enthusiasm, poised under pressure, incredible work ethic and follow through.”

I do not know Admiral Jackson, but having spent twenty-four years as a naval officer, I do know the Navy, and I find it hard to believe that he would have been promoted to flag officer had he done all that he was accused of, let alone serve in the White House under three presidents.

The question then is why were people inside the government leaking this derogatory information about the admiral to Senate Democrats and the media. I believe it had more to do with policy than character. Recall Secretary Shulkin, Jackson’s would-be predecessor at the VA, who was fired not because of a questionable trip he took, but because he resisted the health privatization that Republican donors like the Koch brothers have been pushing for years.

There is no doubt that Trump selected Jackson in a haphazard way, as he has done with many other appointees. But, his acolytes realized that a person who spent his entire adult life working in the defense health-care system would likely believe that the government can and does run an effective health-care system and would not therefore reflexively adopt the Koch-brother agenda. As Politico pointed out, White House aides, who have come to realize that they cannot control the president, have taken to leaking negative information about advisors, cabinet members and cabinet nominees in hopes that they can shape the president’s personnel decisions or torpedo them entirely through the news media. In this case, the leakers prevailed. Not only did Admiral Jackson withdraw his nomination, but he also lost his job as the President’s personal physician and is under investigation by the Pentagon’s inspector general.

If these same people were concerned that Secretary Pompeo would not support President Trump’s positions on the Iran nuclear deal or North Korea, they most likely would have leaked Pompeo’s unwillingness to correct the record that, while he served in the military, he was not a war veteran. For many combat veterans, pretending to be a war veteran is not something to be taken lightly. Moreover, failure to correct the record of something that important displays a serious lack of character, especially for a West Point graduate. Ironically, more Democrats supported Pompeo in the floor vote in the Senate than Republicans voted to confirm a real wounded war veteran, Chuck Hagel.

Ideally, Pompeo will serve as a counterweight to Trump’s worst foreign-policy instincts, and Trump will eventually select someone to run the VA who has the relevant experience and supports veterans’ health care.