Why the Turkish President Revels in Conspiracy Theories 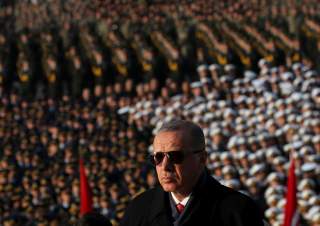 It was simply the latest temper tantrum for Turkey’s mercurial leader Recep Tayyip Erdogan. “What kind of NATO alliance is this?” he said in mid-February during an election rally ahead of March’s local elections. “You give terrorists around 23,000 truckloads of weapons and tools through Iraq, but when we asked, you won't even sell them to us,” he added.

While Erdogan considers Syrian Kurdish militias to be terrorists because of their links to the Kurdistan Workers Party (PKK) in Turkey, his insistence that all Syrian Kurds be stigmatized as terrorists because of their ethnicity has undercut the seriousness with which his diplomatic entreaties are accepted. So too has the tendency of his own forces to engage in ethnic and cultural cleansing of historically Kurdish towns and villages in Syria occupied on supposed counter-terror grounds.

A broader reason for Western and European cynicism toward Erdogan’s complaints is the growing evidence that much of the terrorism about which Erdogan complains is actually sponsored by Erdogan himself as a means to demonize political enemies and fuel the emergencies which allow him to consolidate power. In effect, Erdogan has become the twenty-first century’s chief peddler of the “Reichstag Fire” strategy. Just as Germany’s Nazis blamed rivals for burning down Germany’s Reichstag (parliament) building and used the crisis to suspend civil liberties and deepen Nazi control of the state, so too does Erdogan repeatedly promote false conspiracies in order to consolidate his control.

The Turkish government (initially perhaps with the support of its then-allies in exiled cleric Fethullah Gülen’s movement) promoted two patently false coup plots in order to marginalize secularists within the Turkish military. By the time the conspiracies had unraveled, Erdogan had succeeded in ruining his opponents’ careers and utilizing the accusations to fast-track the dismantling of the check-and-balance system that saw the military act as guarantors of the constitution.

It’s not a coincidence that the worst terrorist attacks in Turkey occur before elections. Consider the bombing of an October 2015 peace rally in Ankara. While the Islamic State perpetrated that attack, the notion that Erdogan was responsible was not a conspiracy. Ahval, a professionally-operated independent portal that reports news which Erdogan no longer allows Turkish newspapers to cover, revealed a European Union intelligence report which assessed that “forces within the AKP commissioned the Da’esh [Islamic State] operatives.”

There was the July 2016 abortive coup attempt, which Erdogan used both to launch a purge of opponents and to declare a state of emergency which allowed him to achieve in practice what Turkish law prohibited. While Erdogan blamed the coup on one-time ally gülen (and some gülenists may, indeed, have participated), the narrative Erdogan embraces and insists the Turkish press amplify seems no more real than the earlier alleged coup plots and the Ankara bombing. Indeed, many questions remain unanswered.

The inexcusable (though now resolved) detention of Pastor Andrew Brunson—and then continued detention of other American and Turkish Americans like NASA scientist Serkan Golge—reflects more on the desire of Erdogan to fan anti-Americanism and fuel the paranoid fantasies of his followers than any notion of evidence or justice.

Erdogan may now spin conspiracies about alleged U.S. and NATO support for terrorism. And, he will fuel the already endemic anti-Americanism inside Turkey by doing so. There is nothing to be done about that other than clear, persistent, and daily pushback to expose reality to Turks conditioned by Erdogan’s lies. But with the Turkish economy teetering and Turkish forces increasingly bogged down in Syria and Iraqi Kurdistan, Erdogan, of course, has no interest in the truth. His only real goal remains to fan the flames of hatred in order to distract from his own sorry economic and military record.