Why Ukraine Is a Very Western War 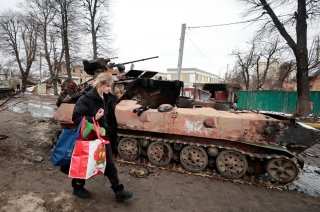 While the events unfolding in Ukraine are keeping most of Europe on edge and Western media outlets in a frenzy to depict the atrocities there, the reaction in the rest of the world appears much more subdued. In Asia, Africa, and faraway Latin America, this war has not evoked the same moral outrage as it has in Europe and North America.

It is not that the non-Western world does not have access to the same information or is unable to utilize the same technology to read about the war in Ukraine. In fact, students in Indonesia are more likely to be able to find Ukraine on a map compared to their American peers.

If anything, the war’s horror is relayed instantaneously in many non-Western local vernaculars. Thanks to the internet, from students to pensioners, most people are able to see the war in Ukraine’s graphic details. Yet most of the non-Western world does not seem as outraged about the unfolding mayhem as the collective West has been.

True, geography and physical distance may be one of the reasons why the rest of the world does not feel the same anguish as Europeans do. But there is a subtext to the non-Western world’s apathy to this new conflict in Europe.

Nowhere is this apathy more apparent than in the debating hall of the United Nations Security Council (UNSC).

Until he succumbed to U.S. pressure, Brazil’s representative to the UN wavered on joining the February 25 Security Council draft resolution condemning the Russian invasion of Ukraine.

The same was the case with Mexico. While its representative, Juan Ramon de la Fuente Ramirez, voted in favor of the draft resolution, he also used the occasion to criticize Western powers seeking to maintain the high moral ground. Ramirez “recalled the invasions of his country [Mexico] by the United States and France, noting that it lost a large part of its territory,” owing to such expansionist aggression.

While abstaining from a UNSC draft resolution condemning the Russian invasion, the Indian representative was at pains to describe the suffering of some 20,000 Indian students stranded in Ukraine.

While some non-Western countries such as Kenya, Gabon, and Ghana did not approve of President Vladimir Putin’s invasion of Ukraine, this does not mean that they were being led by the self-proclaimed high priest of democracy, the United States. Their support of the draft resolution can be read both as a rebuke to Putin’s Russia while showing a mirror to the United States.

These African, Asian, and Latin American UNSC member states both condemned Russian aggression while also reiterating the West’s history of aggression. If anything, the occasion was used to highlight how, in the last quarter-of-a-century, the high and the mighty West has consistently undermined the principles of the UN Charter and the rules-based international order and brazenly violated the territorial integrity of scores of sovereign nations by treating them as inconveniences to their self-serving imperial designs.

On another front, a new narrative in Western media has emerged.

Note, for instance, the comments of CBS News senior correspondent in Kyiv Charlie D’Agata, on the war in Ukraine: “This isn’t a place, with all due respect, like Iraq or Afghanistan that has seen conflict raging for decades. This is a relatively civilized, relatively European place where you would not expect that.” Though he subsequently apologized, his comments are characteristic of how many Western commentators have come to suggest that war and violence are the sole preserve of the third world.

If there is outrage in the non-Western world, it concerns these comparisons that the West has drawn about this conflict in its backyard. To many in the non-Western world, if the West finds itself at such a loss and cannot comprehend such a brutal war in their supposedly civilized part of the world, it should look back at its own history of warfare.

There are also the many indignities that some non-Westerners caught up in this war have come to experience. Videos on social media show hundreds of African and Asian students pushed back by machine-gun wielding border guards at the Ukraine-Poland border while Ukrainians fleeing the war were allowed to pass through.

There have also been reports of Indian students being thrown off of trains leaving for Ukraine’s western border. Some of these bystanders have also complained of being beaten by local Ukrainians. Such stories appear far from uncommon. African students have fared far worse than their Indian counterparts. Footage from independent journalists and the victims show African citizens being blocked from crossing the Ukrainian frontier by the country’s gun trotting border guards. Such racial profiling and discrimination have driven a deeper wedge between the West and the rest.

While fortress Europe’s wartime apartheid was on full display in its treatment of some non-European and non-white students stuck in Ukraine, the occasion has also highlighted why many non-Western societies are divided on Europe’s war in Ukraine.

It's the West’s War

There is almost a vicarious disdain for the West and its anti-war rhetoric by most of the non-Western world. The relative absence of people marching in Asian, African, or Latin American cities, carrying Ukrainian flags, is substantive. If the anti-war protests against Russian warmongering have been minimal to non-existent in the rest of the non-Western world, there is a palpable reason behind it.

Plenty of Afghans, Iraqis, Syrians, Yemenis, Libyans, or Malians who have been subject to the West’s relentless military campaigns on their home turf, through their silence and apathy over the conflict in Ukraine, are reminding Western audiences how war really affects ordinary people. Maybe it is time that the West thought of ways to end the specter of war and not remain hostage to it.